A new Midtown Anchorage hotel is set to rise, but complications snarl plans for 2 other projects 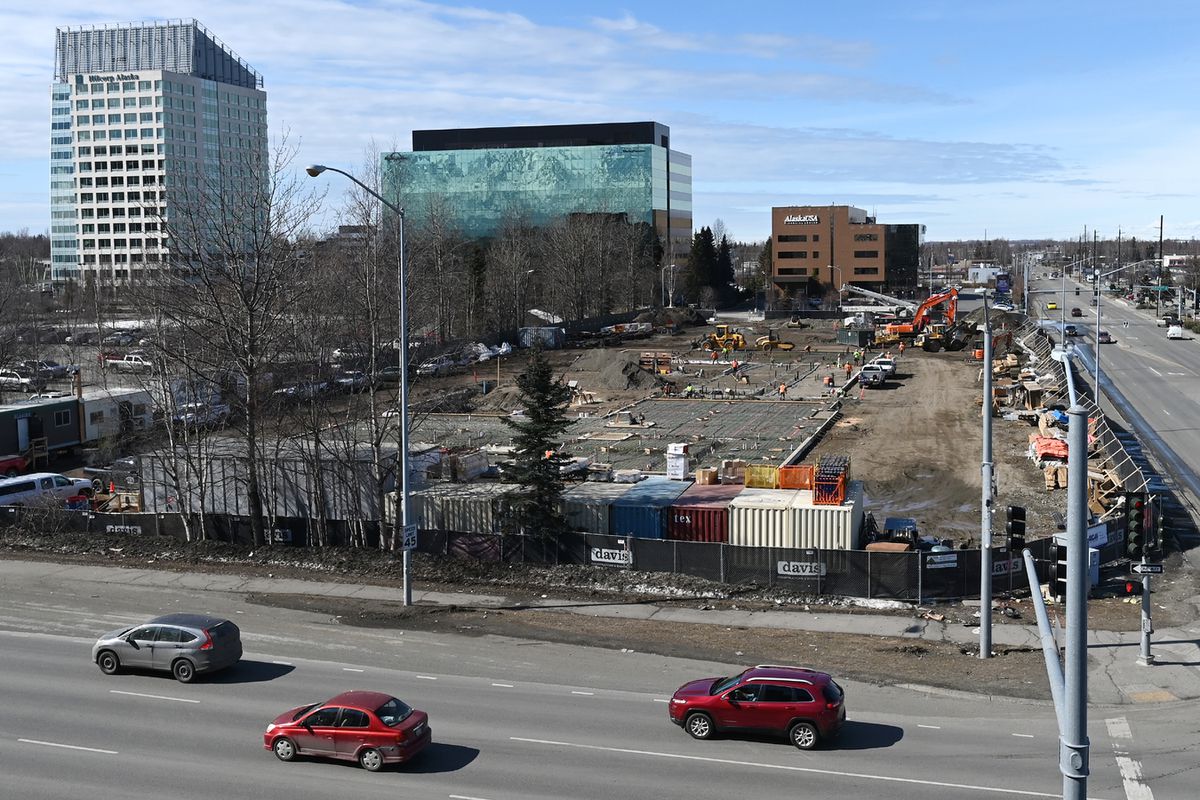 Groups of investors are moving ahead with plans to build three hotels in Midtown Anchorage, including a four-story Aloft Hotel set to open next spring.

The efforts have excited city officials, who see them as a signal that Alaska’s once-growing travel industry might soon regain its footing after the COVID-19 pandemic.

But the projects face challenges, including lumber and steel prices that have jumped during the pandemic and lingering uncertainty about the pace of the economic recovery once the pandemic ends.

“The big question is timing, and how fully does the market come back?” said Michael Mohn, with Seattle-based hotel consultancy Kennedy & Mohn.

The 146-room Aloft Hotel under construction at the southwest corner of C Street and 36th Avenue is moving ahead quickly. A dual-branded Holiday Inn Express and Candlewood Suites, as well as a Courtyard by Marriott to replace one that burned during construction in 2019, are also planned along a half-mile stretch along C Street sometimes called “Hotel Row.”

Developers behind the Aloft Hotel had originally planned to open the doors this spring.

But the collapse of Alaska’s tourism industry during the pandemic, led by canceled cruise ship voyages last summer, put plans on hold for a year.

“We were at a point where we could hit pause, and we did that to manage the risks better,” said Anton Villacorta, the project manager for JL Properties.

JL is owned by Anchorage developers Jonathan Rubini and Leonard Hyde, who own the land where the project will be built.

The project is back on track for construction and plans to open next spring, Villacorta said.

The Aloft Hotel, a Marriott International brand, will cater to tech-savvy tourists. It will offer voice-activated features and door locks controlled by mobile phones, and feature art and music by local artists.

The foundation was recently put in, Villacorta said.

“In the next week or so, it will start looking like a building,” he said.

The construction value of the hotel is $16 million. But once beds, furnishings and details are added, it will cost more than $30 million, Villacorta said.

The prices of lumber and steel needed for construction have risen significantly during the pandemic, pushing up the cost of construction, he said. But that hasn’t dampened enthusiasm.

“Alaska is pretty much on everyone’s bucket list,” he said. “These three new hotels will be in good shape.”

The high lumber and steel prices contributed to a construction delay for the Holiday Inn Express and Candlewood Suites at the southeast corner of 48th Avenue and C Street, officials said.

The high prices have been blamed on factors such as global shipping delays and increased demand for building material, as well as factory closures and reduced production during the pandemic.

At four stories tall, the hotel will feature 193 rooms and suites, providing options for quick visits in addition to longer stays in the suites, city officials said.

The Koehler Organization, a hotel developer based in South Dakota, is pursuing the development at a construction value of $22 million, according to city records.

The hotel was originally planned for completion next year, said Todd Major with ACSC Builders of Fairbanks, the project’s general contractor.

But the plans have been delayed until 2023 because of the high costs, he said.

“The current lumber markets are cost prohibitive to keep moving forward,” he said.

ACSC plans to start foundation and ground-related utilities work this year. But other construction is delayed until the “market climate is less hostile,” he said.

The project has applied for a city permit, and its building plans are under review, said Bob Doehl, building official for the Municipality of Anchorage.

Investors behind a 141-room Courtyard by Marriott, which was destroyed during construction by a fire in 2019, “fully intend” to rebuild when the insurance payment is complete, said Ric Marko with Anchorage MC Holding, the landowner.

The company is suing underwriters with Lloyd’s of London insurance company.

“I don’t know how long the process will take and what the results will be, but we are optimistic we’ll be rewarded enough money to rebuild the Courtyard,” Marko said.

The hotel would be built just south of the Holiday Inn Express and Candlewood Suites, at 4960 A St., Doehl said. Its full value was originally $35 million.

The Courtyard hotel’s permit for construction was reactivated earlier this year, Doehl said.

Doehl said the activity by hotel developers appears to be a good sign for the Anchorage economy.

“When you see this new inventory coming into place, it shows there’s confidence in tourism returning sooner rather than later,” Doehl said.

If built, the Holiday Inn Express and Courtyard by Marriott will join other midsize hotels on “Hotel Row,” a section of C Street from just north of Tudor Road to International Airport Road.

Mohn said hotels in Anchorage have historically performed extremely well. Strong demand in summer allows hoteliers to charge high rates that make up for reduced business in winter, he said.

Eight hotels have been built in Anchorage since 2011 at a construction value of about $100 million, according to city records. Most of those have gone up in Midtown.

Mohn believes the three planned Midtown hotels will be built, but problems around the pandemic could add to delays, he said.

But what Alaska tourism will look like in the future is anyone’s guess, he said. Canada halted large-ship cruise travel through February 2022. Alaska’s congressional delegation has proposed a workaround to a law that requires large cruise ships to stop in Canada before they arrive in Alaska, but time is running out.

Once cruise ship travel does resume, Mohn said, bookings might not reach pre-pandemic levels if some people remain wary of catching COVID-19.

And business and government travel could be reduced if many meetings continue to happen online.

“We’ve learned in the last 14 months that not all travel is essential travel,” he said.

Still, Mohn said there’s room for more hotels in Anchorage, in part because the city is a required stop for so many travelers in Alaska.

Some cruise ship travelers head out on their own after their cruise-based packages end in Alaska. They help fill downtown and Midtown hotels, he said.

“There are never too many new hotels,” Marko said. “But there are too many older ones. Everyone likes a new hotel.”