Tuesday is runoff election day for Anchorage mayor. Here’s what to expect. 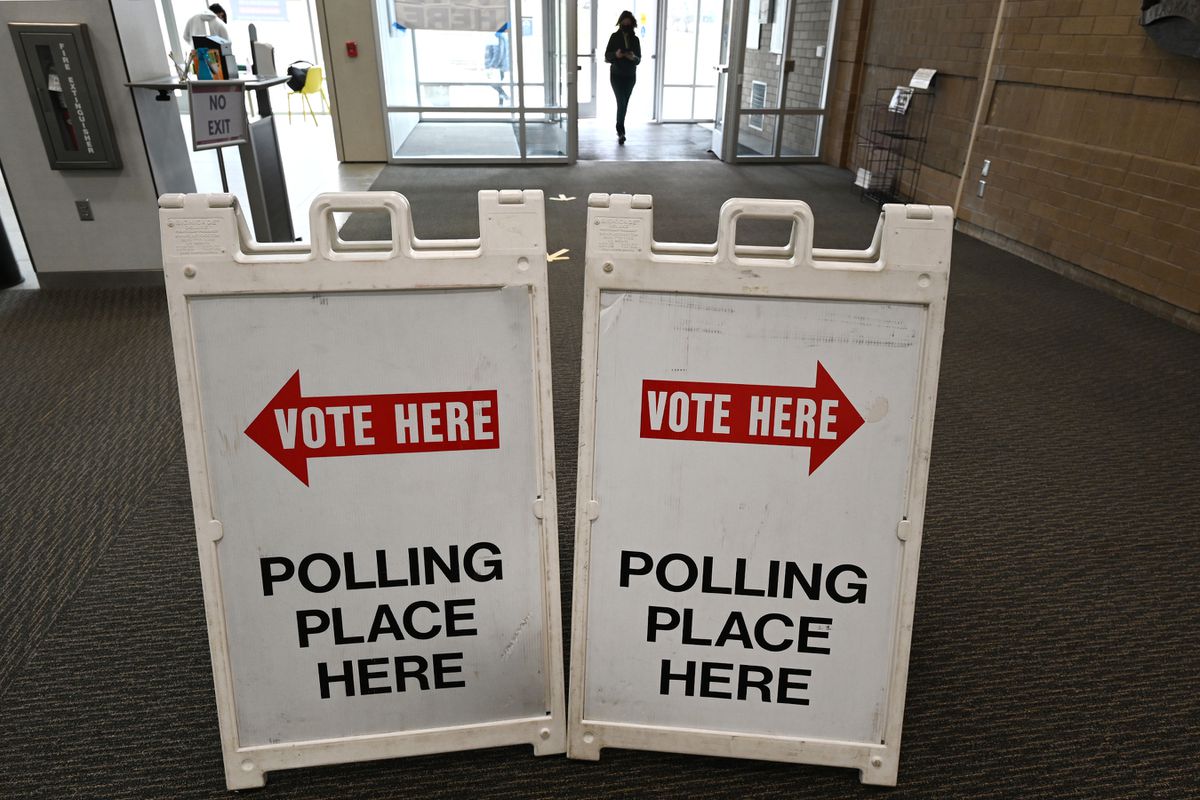 A voter enters the Loussac Library on Monday, May 10, 2021, where in-person voting was taking place in the both the Wilda Marston Theatre and the Anchorage Assembly Chambers. All three vote centers, City Hall, Eagle River Town Center, and Loussac Library will be open on Election Day, Tuesday, May 11, from 7 a.m. to 8 p.m. All ballot envelopes must be postmarked on Election Day, or returned to a secure drop box by 8 p.m. (Bill Roth / ADN)

A voter enters the Loussac Library on Monday, May 10, 2021, where in-person voting was taking place in the both the Wilda Marston Theatre and the Anchorage Assembly Chambers. All three vote centers, City Hall, Eagle River Town Center, and Loussac Library will be open on Election Day, Tuesday, May 11, from 7 a.m. to 8 p.m. All ballot envelopes must be postmarked on Election Day, or returned to a secure drop box by 8 p.m. (Bill Roth / ADN)

The runoff election for Anchorage mayor is coming to a close, and that means city residents have little time left to vote.

On Tuesday at 8 p.m., in-person vote centers and the 18 secure ballot drop boxes around the city will close. Shortly after, the elections center will release the first unofficial election results. It will only release one tally on Tuesday.

However, it may be several days before it’s clear who the next mayor of Anchorage will be.

The vote-by-mail system means ballots will continue to arrive at the elections center and be counted for more than a week after runoff election day.

Each day after runoff election day, the elections center will release a new set of unofficial results as it continues to process ballots.

Vote tallies could change up until the certification of the election results by the Anchorage Assembly on May 25.

Both campaigns say they are hoping for definitive election results Tuesday, but that they must wait and see what election day brings.

As of Monday afternoon, 71,127 ballot packages had been returned to the elections center, Municipal Clerk Barbara Jones said.

Of those, election workers have opened and scanned more than 48,000 ballots so far, she said.

While it’s not clear exactly how many of those scanned ballots will be included in the initial tabulation on Tuesday, Jones said she thinks it should be “as close as possible” to the total number of ballots scanned.

Mailed ballots must be postmarked by Tuesday and received at the elections center by May 21 to be counted. This year, overseas ballots have a few extra days to arrive and will be accepted until May 25.

Residents who have lost or damaged their ballot or didn’t receive a ballot, or voters who simply prefer voting in person, can still head to one of Anchorage’s three vote centers.

Locations are at City Hall, the Loussac Library and Eagle River Town Center.

Both candidates anticipate a close race

The candidates — Forrest Dunbar, an East Anchorage Assembly member, and Dave Bronson, retired military and commercial pilot — both have said they expect the race to be close.

The election has grown contentious, and the two candidates take widely differing positions on most of the challenges that Anchorage faces, including the COVID-19 pandemic, the city’s economic recovery and homelessness.

[A contentious election for Anchorage mayor is nearing the finish line, revealing deep divisions on how the city should move ahead]

Bronson is an outspoken critic of the city’s COVID-19 pandemic policies, including the mask mandate and requiring business closures, and downplayed the public health impacts of the pandemic. He has said he wants to bring conservative leadership to the city. Conversely, Dunbar has supported the city’s handling of the pandemic and says he is running to bring “fact-based leadership” to Anchorage.

The race for mayor began with 15 candidates in the April 6 municipal election, and the top two advanced to the runoff. A candidate needed 45% plus one to win the election. Bronson came out on top with 33% of the vote, while Dunbar had 31%.

During April’s first few rounds of unofficial election results, Dunbar was initially ahead, but as more votes were tallied, the votes swung toward Bronson.

Signs point to a higher voter turnout for the runoff

[Anchorage is at a turning point on homelessness. The mayoral runoff candidates differ on what to do next.]

The more than 71,000 ballots returned so far make up about 94% of the returned ballots in April 6 election, which saw a total of 75,441 residents voting. Voter turnout was just under 32% in April.

Joelle Hall, president of the Alaska AFL-CIO, the largest union in the state and a backer of Dunbar’s campaign, said in her view, the voters who are returning ballots early had long decided who they were going to vote for. Those who are still choosing a candidate tend to vote later, she said.

“I do think this is going to be close,” Hall said of the runoff election. “We’ve had two campaigns working really hard. And so I think it’s just time for folks to get out and turn those ballots in.”

The number of ballots returned already in the runoff is an encouraging sign of a high voter turnout, she said.

Election workers have for days been verifying and processing ballots, and on Saturday, workers spent extra time processing ballot packages. Before ballots are scanned into the city’s vote tabulation system, they must go through a signature verification process.

The first vote count on April 6 was also unexpectedly low — just over 10,600 ballots were included. That was due, in part, to a flood of last-minute voting, and also to a high number of ballots that had been unusually marked. Those required a process called adjudication, meaning election workers had to verify the voter’s intent using rules in municipal code.

Ballots are processed in batches of about 100, and when one ballot needs adjudicating, the whole batch is not included in tabulation until it is adjudicated.

Jones said that she and other election officials have been keeping up with that process and that most scanned batches should be included.

Though not certain, it is likely that a clearer picture of the final results will emerge Tuesday than it did on April 6.

The results will not be official until they are certified by the Assembly on May 25.

[Q&As: Where do the mayoral runoff candidates stand on the issues?]