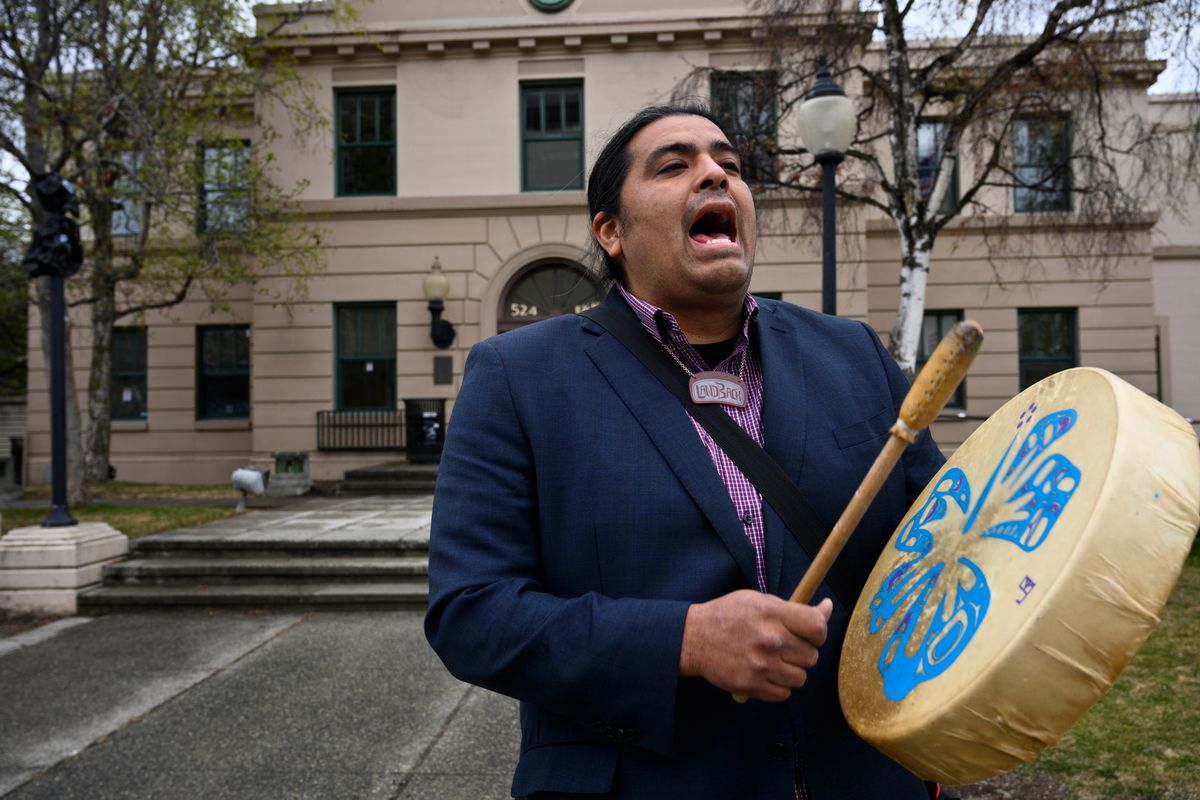 Johon Atkinson of Metlakatla drums and sings Tsimshian songs in front of Historic City Hall on 4th Avenue downtown on May 20, 2021. Atkins said he thinks the songs can share good energy at at time when the world needs it. (Marc Lester / ADN)

Johon Atkinson of Metlakatla drums and sings Tsimshian songs in front of Historic City Hall on 4th Avenue downtown on May 20, 2021. Atkins said he thinks the songs can share good energy at at time when the world needs it. (Marc Lester / ADN)

If downtown Anchorage has been half asleep during the pandemic, Johon Atkinson helped wake it up this week.

As Atkinson sang and beat his drum in front of Historic City Hall, his Tsimshian words and rhythms pulsed along Fourth Avenue and reflected off restaurants, storefronts and a high-rise hotel. Passers-by, some carrying bags from souvenir shops or backpacks loaded with camping gear, turned to look.

“Being down here in a park, we can still socially distance, but my voice could carry a lot farther than six feet,” he said.

Atkinson, 40, visiting from Metlakatla in Southeast Alaska, said he has looked forward to returning to the spot since the pandemic began complicating travel. For this trip, he brought two drums. One to play and another for when he invites others to join him.

“As soon as I got off that jet, I wanted to come down here and sing some songs,” he said.

Atkinson believes in the healing power of his traditional music. His deer hide drum sounds the same now as it did for his ancestors thousands of years ago, he said, and connects him to the strength of Tsimshian people who faced colonization and the removal of traditional language and songs.

He was about 30 years old when he began to take singing and drumming seriously, he said. Then his life changed for the better.

“I started to understand who I was,” he said. “And when you understand who you are and your purpose in this world, you just look at life differently.”

Atkinson is in Anchorage this week to help build a canoe at the Alaska Native Heritage Center. When his workday ends there at about 4:30 p.m., he heads downtown.

On Thursday, Atkinson played a drum given to him by his niece, who painted the head to include her Tsimshian and Hawaiian roots. He stood near a light pole and sang with hardly a break between songs.

One man approached to sit on a bench nearby and another watched from adjacent Elizabeth Peratrovich Park. Two other men crossed the street for a closer look. A woman danced as she passed him on the sidewalk and another man gave him a thumbs-up and smiled from a distance.

People should take every opportunity they can to “share wellness,” he said. It was his fourth straight day of singing downtown, and he planned to keep coming back each day until he heads home. Everyone will know his songs by then, he joked.

“We all have things that we worry about, things in the past that weigh us down,” he said. “But for those moments when they come and join me and sing, and they come and dance to the songs…, it’s such a beautiful thing and it’s so needed right now in this world.”