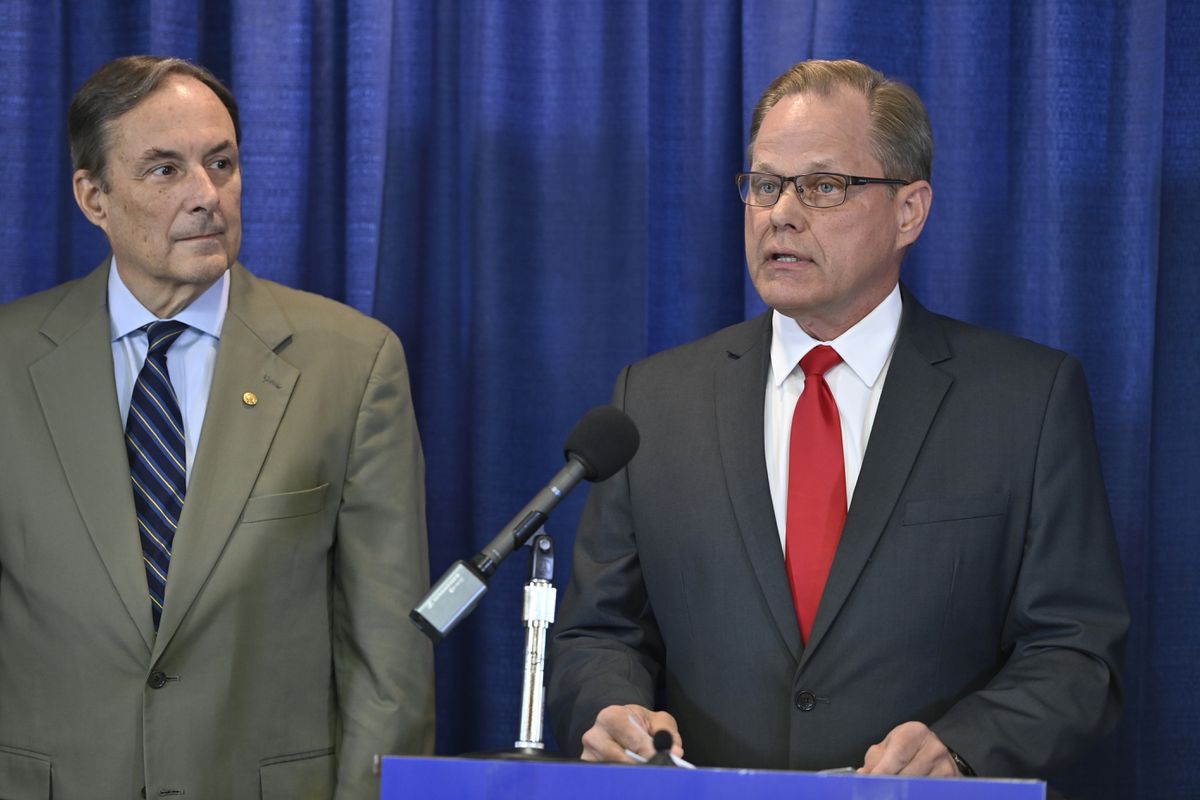 Mayor-elect Dave Bronson talks about his transition into the office during a news conference on Monday, May 24, 2021. Craig Campbell, one of Bronson's transition team leaders, is at left. (Marc Lester / ADN)

Mayor-elect Dave Bronson talks about his transition into the office during a news conference on Monday, May 24, 2021. Craig Campbell, one of Bronson's transition team leaders, is at left. (Marc Lester / ADN)

Assembly Vice Chair Chris Constant said that previous city budgets have set aside money for expenses during mayoral transitions, such as in 2009, when $60,000 was budgeted for former Mayor Dan Sullivan’s transition into office.

Constant said the Assembly at its next meeting on Tuesday will vote to appropriate a likely similar amount of funds for Bronson’s team.

Since winning the May 11 runoff election, Bronson has gathered a transition team of more than two dozen people, most of whom are unpaid volunteers, said Matt Shuckerow, a spokesman for the transition team. Many have donated office supplies and equipment.

The money will help pay for rent, office supplies and normal transition costs, he said.

“The Bronson transition team has been aware of this issue for some time and are glad to see it being resolved,” Shuckerow said.

Constant said he did not discover the omission in the budget himself, nor did he learn about it from Bronson and his team. Instead, he learned about it recently from The Alaska Landmine, a website owned and operated by political writer Jeff Landfield.

“I got a call from somebody that asked the question, ‘Hey, is there money in there?’ And I assumed there was,” Constant said.

A new mayor is elected every three to six years. Transition money is not something Assembly members would normally consider when approving a budget, Assembly member Felix Rivera said.

“As far as I know, it’s never anything that Assemblies think about or worry about. It’s something that the mayor and the administration bake into the budget when it’s created,” Rivera said. “So it wasn’t until very recently, when we started looking into it, that we realized it wasn’t done.”

Constant said that soon after the discovery he then contacted the transition team and asked them if they needed money.

At the time, Bronson’s team told him that they hadn’t reached out because they didn’t want to “make a fight out of it,” Constant said.

“Here’s a thought for the future — don’t assume something is a fight. Ask a question,” he said. “That to me is the bottom line takeaway of it all.”

Bronson during his campaign for mayor positioned himself as a conservative leader who would challenge the city’s progressive-leaning Assembly and was highly critical of its members.

The administration of former Mayor Ethan Berkowitz proposed the 2021 budget in early October of 2020. A few days later, he resigned amid a scandal over what he called an “inappropriate messaging relationship” with a local news anchor.

The Assembly voted in Acting Mayor Austin Quinn-Davidson to fill the office, and she retained much of Berkowitz’s administration.

A spokesperson for the acting mayor has not yet responded to emailed questions asking about the most recent budgeting process and why money for the transition team was not included.