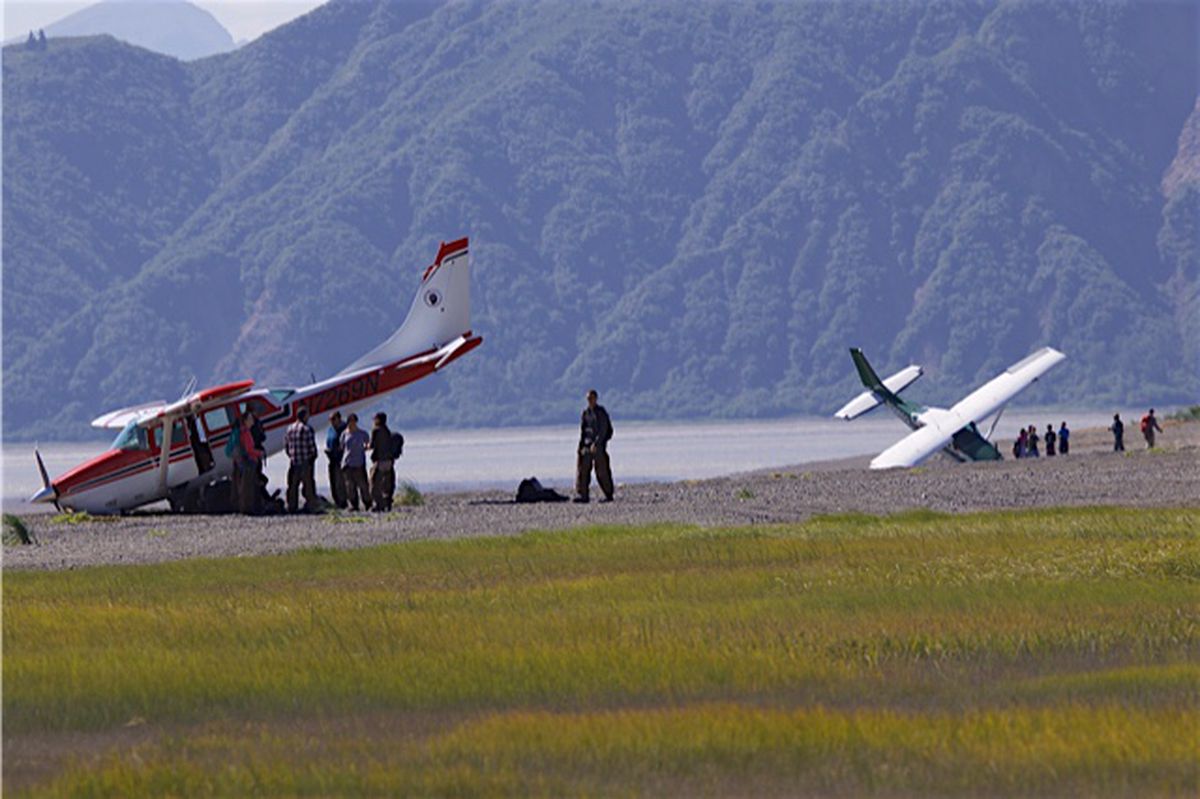 Planes flown by two air tour operators nosed over on a beach on Chinitna Bay Tuesday afternoon. No injuries were reported among the seven people on board. (Courtesy Richard Hojohn)

Planes flown by two air tour operators nosed over on a beach on Chinitna Bay Tuesday afternoon. No injuries were reported among the seven people on board. (Courtesy Richard Hojohn)

Two small commercial planes tipped onto their noses Tuesday on a beach near a popular bear-viewing spot west of Cook Inlet, and federal authorities are looking into how it happened.

National Transportation Safety Board investigator Shaun Williams said Wednesday the incident at Chinitna Bay, near Lake Clark National Park and Preserve on the west side of Cook Inlet, was first reported to the agency shortly after 4 p.m. Tuesday. Nobody in either of the two Cessna 206s involved was injured.

"Both were operated by commercial air taxi operators," Williams said. "One was repositioning when it hit soft sand, and the other one was taxiing to depart."

K Bay Air co-owner Dee Hughes said one of the company's planes, carrying a pilot along with five passengers, was the taxiing aircraft. The Cessna had landed near other planes below the beach's high-tide line, in an area frequently used as a runway while the tide is out.

According to Hughes, the beach's sand is stable enough to support an aircraft when it's wet. But on hot Southcentral days — like Tuesday — the sand dries out and softens.

"(The plane) hit a soft pocket of sand," Hughes said. "Those beaches are starting to get soft over there with the warm weather."

A Cook Inlet Aviation plane was repositioning on the beach shortly afterward, according to company co-owner Zack Tappan, when it too hit soft sand and nosed over. Only a pilot was on board.

"A lot of beaches are drying out," Tappan said. "A dry beach is a soft beach."

Hughes said K Bay Air staff offered help to the Cook Inlet Aviation pilot, with both planes' nose landing gear buckling when they hit the sand patches. The first aircraft's passengers were flown out of the area on a second K Bay Air plane.

Both Hughes and Tappan said their companies' pilots are trained to make flyovers and inspect a beach before landing on it. Hughes said K Bay Air pilots also walk a beach to check for soft spots before taking off.

Richard Hojohn, owner of the Bear Central Safari Lodge about half a mile from where the planes nosed over Tuesday, said two planes made successful takeoffs from the beach immediately beforehand.

"The third one nosed down into the sand," Hojohn said. "I hopped on my six-wheeler to drive out there to see if anyone was injured — on my way out there, I saw another tail sticking up."

Federal Aviation Administration spokesman Allen Kenitzer said in an email that "the FAA is looking into this."

More than a dozen bears are occasionally visible from a single spot at the Chinitna Bay site, according to the National Park Service — an opportunity air tour companies have flocked to over the last five years, with as many as nine aircraft on the beach at once this summer, Hojohn said.

"The beach is the worst I've seen it in 18 years," Hojohn said. "All these operators have been chewing up the beach horrendously these last few weeks, bringing 20 to 40 people in at a time."

Hughes said Chinitna Bay's proximity to the Kenai Peninsula has made it more popular among air tour operators than other destinations in the park, with helicopters as well as fixed-wing aircraft visiting the area in recent years.

"Chinitna gets more traffic because it's closer to Soldotna and closer to Anchorage," Hughes said. "It is being used by Homer, Soldotna and at least one company out of Anchorage."

Richotte said landing on beaches in the park is "a very common thing," as it is elsewhere in Alaska.

"Right now there are very soft conditions on the beach below high tide," Richotte said. "Pilots need to be very aware of changing conditions, and I think that's what happened out here."

The park doesn't have jurisdiction over its beaches, Richotte said, because its boundaries technically extend to the high-tide line. Exposed beaches below that line, like the one where the planes nosed over on Tuesday, are state property.

Williams said Thursday the NTSB won't be further investigating Tuesday's nose-overs because the damage to the K Bay Air plane involved isn't substantial, based on federal regulations defining which incidents the board investigates.

Hojohn said he's relieved the planes nosed over while they were already on the ground, rather than during a landing.

"Everybody was lucky — in this case that's the good news," Hojohn said. "It's a very dramatic thing, but it's a good lesson for all pilots on how dangerous these beaches can be."