In collision at Wasilla Airport, two planes tried to land at the same time 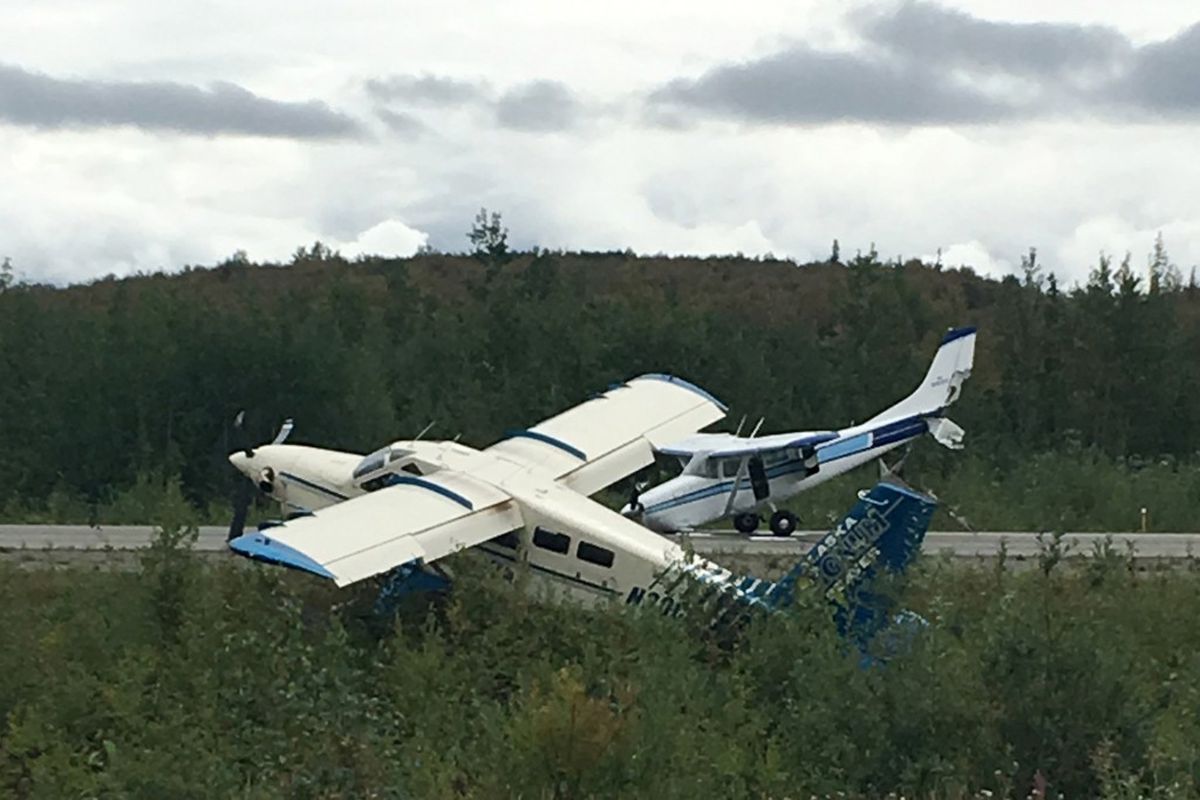 Two aircraft at the Wasilla airport after a collision Friday. (James Spikes)

Two aircraft at the Wasilla airport after a collision Friday. (James Spikes)

WASILLA — Two single-engine planes collided while landing on the same runway at Wasilla Airport Friday afternoon but no one was seriously injured.

The Federal Aviation Administration closed the airport after the accident was reported about 1:30 p.m. The airport was still closed early Friday evening.

There were two people in each of the planes, which sustained substantial damage.

One, a Cessna 210, was operated by a student pilot with a certified flight instructor on board, according to Mike Hodges, an aviation accident investigator with the National Transportation Safety Board.  It wasn't immediately clear where the Cessna had originated from, Hodges said.

The other aircraft was a converted turboprop de Havilland Beaver registered to former Alaska Attorney General Charlie Cole of Fairbanks. A friend of the family said Cole was not flying the plane and not involved in its operation.

The Beaver's door was marked with the logo of Fly Denali, a Denali Park-based flightseeing and climbing support carrier. People near the plane declined to comment Friday as did a staff member at the air carrier's office.

A friend of the Beaver pilot said he took off from his private Wasilla airstrip and was bound for Healy. The plane stopped at the airport for fuel, Hodges said.

Ray Block, owner of Ray's Aircraft Service shop near the runway, said he heard the planes collide with "sort of a scraping sound" loud enough to grab his attention.

"I looked up there and saw two planes on the runway and thought, 'That is not good,' " Block said.

The planes came together, the Cessna atop the Beaver, at the far end of the runway and then slid 600 or 700 feet before the Cessna separated and veered to the right, he said. Other pilots told Block one aircraft was flying the standard right traffic pattern for the runway, the other a left traffic pattern.

The accident marks a third midair collision in the busy airspace over Mat-Su over the past two years, though no deaths have resulted. One collision in June 2015 involved another low-altitude incident just before touchdown at Talkeetna. The other, high over the Knik-Goose Bay Road area in January 2015, severely injured both pilots.

FAA rules say pilots near airports are supposed to use the same radio frequency and pilots also have a responsibility to "see and avoid" other aircraft.

Hodges said Friday he was still trying to confirm "who was saying what and what frequencies were being used at the time" of the Wasilla Airport collision.

Authorities early Friday afternoon issued a warning to pilots about the airport closure but numerous planes could be seen circling low before flying away. At least two planes landed despite the warning and the obvious emergency scene below, that included a Wasilla police SUV with lights flashing, a plane in the middle of the runway and another off to the side.

One came in low over the wreckage, continued to descend around it, and landed on the far end of the same runway before quickly taking off again.

The NTSB will produce a preliminary report on the accident within a week or so. The final investigation may take up to a year.