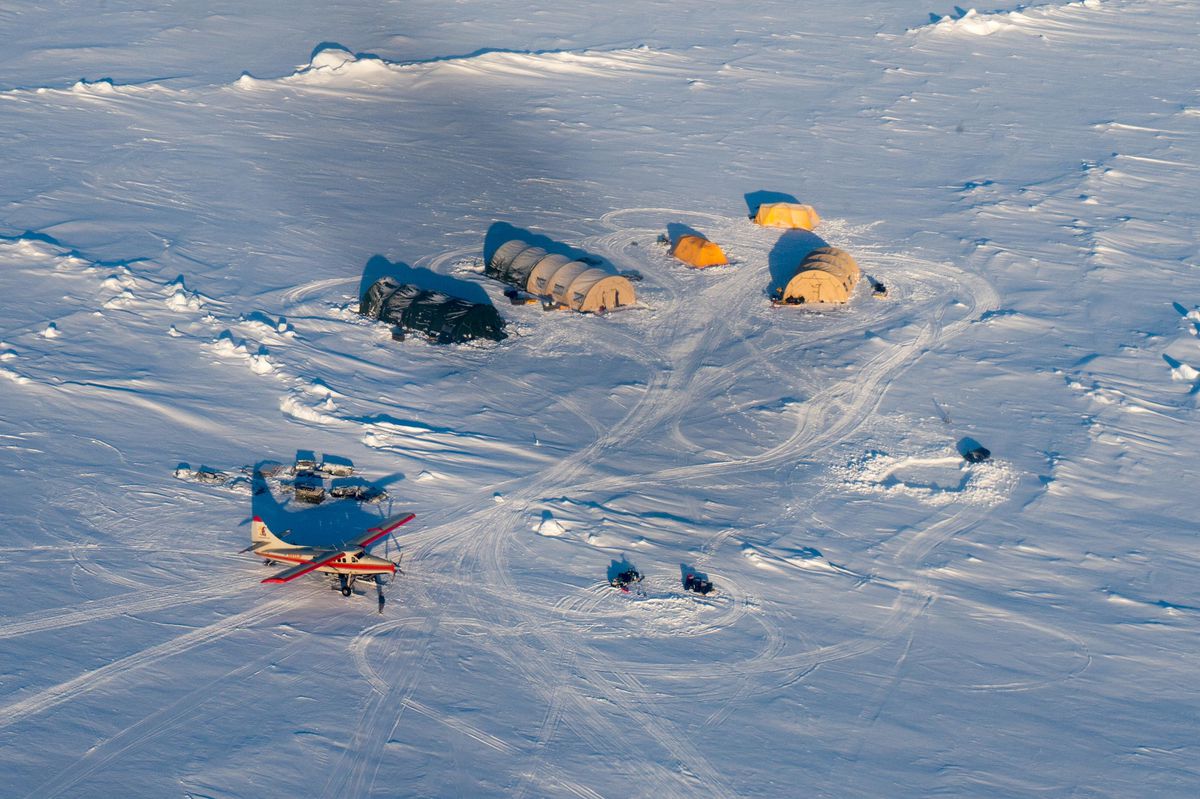 Ice Camp Skate is seen during camp build during Ice Exercise (ICEX) 2018. ICEX 2018 is a five-week exercise that allows the Navy to assess its operational readiness in the Arctic, increase experience in the region, advance understanding of the Arctic environment, and continue to develop relationships with other services, allies and partner organizations. (U.S. Navy photo by Airman 1st Class Kelly Willett)

Ice Camp Skate is seen during camp build during Ice Exercise (ICEX) 2018. ICEX 2018 is a five-week exercise that allows the Navy to assess its operational readiness in the Arctic, increase experience in the region, advance understanding of the Arctic environment, and continue to develop relationships with other services, allies and partner organizations. (U.S. Navy photo by Airman 1st Class Kelly Willett)

Ice Camp Skate is seen during camp build during Ice Exercise (ICEX) 2018. ICEX 2018 is a five-week exercise that allows the Navy to assess its operational readiness in the Arctic, increase experience in the region, advance understanding of the Arctic environment, and continue to develop relationships with other services, allies and partner organizations.  (U.S. Navy photo by Airman 1st Class Kelly Willett)

A man struck in the head by an airplane on a remote Arctic Ocean ice airstrip during U.S. Navy exercises was expected to return home from the hospital this week.

The man, who works for the Arctic Submarine Laboratory in San Diego, was flown with serious head and neck injuries last week to Anchorage from a temporary camp on an ice floe 140 miles north of Deadhorse.

He was expected to make a full recovery, according to Bald Mountain Air Service, the Homer-based air carrier operating the flight involved.

The deHavilland DHC-6 Twin Otter airplane was taking off for Deadhorse when it hit the man around 7:45 p.m. March 20, according to a preliminary report released Tuesday by the National Transportation Safety Board.

Bald Mountain placed the pilots involved on administrative leave pending the results of mandatory drug testing and further investigation, according to a company statement.

The multimillion-dollar plane was damaged during the incident and can't fly on its own power off the floe, a Bald Mountain representative said Wednesday.

A U.S. Army spokesman said it's possible a Chinook helicopter from Fort Wainwright could be deployed to remove the stranded aircraft.

Bald Mountain was providing logistical support for the U.S. Navy ICEX 2018 exercises. The annual exercise this year involved submarines stationed in Washington and Connecticut as well as a sub from the U.K. Royal Navy.

The man was standing by the side of the airstrip because he wanted to get a picture for his son, said Clint Johnson, NTSB's Alaska region chief. He had planned to photograph some Lego figurines with the airplane taking off in the background.

Johnson said Wednesday that the injured man was later able to provide a "tremendous amount of detail" as part of the investigation.

"I had a good conversation with him," he said. "I heard he and his wife planned to leave yesterday. That was the plan on Sunday night."

The man and the captain had agreed that he'd take a picture of the plane, according to the NTSB report.

The airstrip was lined with snow berms on both sides, the airplane captain told investigators. He described clear skies, the sun low on the horizon, and "ice pack haze" with flat-light conditions that made it hard to pick out topographical features.

The captain was beginning take off when both pilots saw the man standing on the left side of the airstrip.

The man later said he stood behind one of the 3- to 4-foot tall snow berms clear of the airstrip, according to the report. He watched as the plane climbed more slowly than in previous departures.

During takeoff, the captain told investigators, the plane veered to the left, so he corrected it and "lowered the nose to remain within ground effect and gain airspeed before initiating a climb," the report said.

Ground effect involves using the cushion created by pressure between a plane's wings and the ground to build speed before gaining altitude.

As the plane's airspeed increased, the pilot began climbing and then started a turn to the left, the report said.

During the turn, both pilots said they heard a loud thump, immediately followed by a problem with the aileron — a device on the tip of the wings that controls the plane's ability to roll into a turn.

The captain kept turning left and made an emergency landing to the north, the report said. "The captain said that after landing, both pilots saw the pedestrian lying near a snow berm on the left side of the airstrip."

The man later told investigators the last thing he remembered before the plane hit was seeing the Otter's left wing getting lower to the ground as it accelerated toward him.

The next thing he remembered, the report said, was waking up in the medevac helicopter.

"Efforts are currently underway to salvage and transport the aircraft," Bald Mountain representative Sheila Shields said in an email Wednesday. "The mission is complex and faces a number of logistical challenges, including but not limited to rapidly changing environmental conditions."

A decision as to whether a Chinook helicopter will fly from Fort Wainwright to fetch the damaged plane will be made "at the Department of the Army level" at the Pentagon, according to U.S. Army Alaska spokesman John Pennell.

The Army has helped set up the ICEX base camp before, Pennell said. "But I don't think we've ever been called to retrieve an aircraft from a floating sheet of ice."

He didn't know when a decision would be made.

The Navy exercise beneath the Arctic ice is an annual event.

During this year's exercise, the U.S. subs fired training torpedoes — without warheads and carrying minimal fuel — later recovered by divers from the frigid waters, according to a U.S. Navy press release.

The NTSB report on the incident is only preliminary. A final report was expected by November, Johnson said.

The incident marks the second time a plane hitting a person made the news in recent days.

Last week, a pilot was found guilty of assault after "buzzing" another man while on the job, hitting him in the head and causing permanent, severe brain damage in 2014.