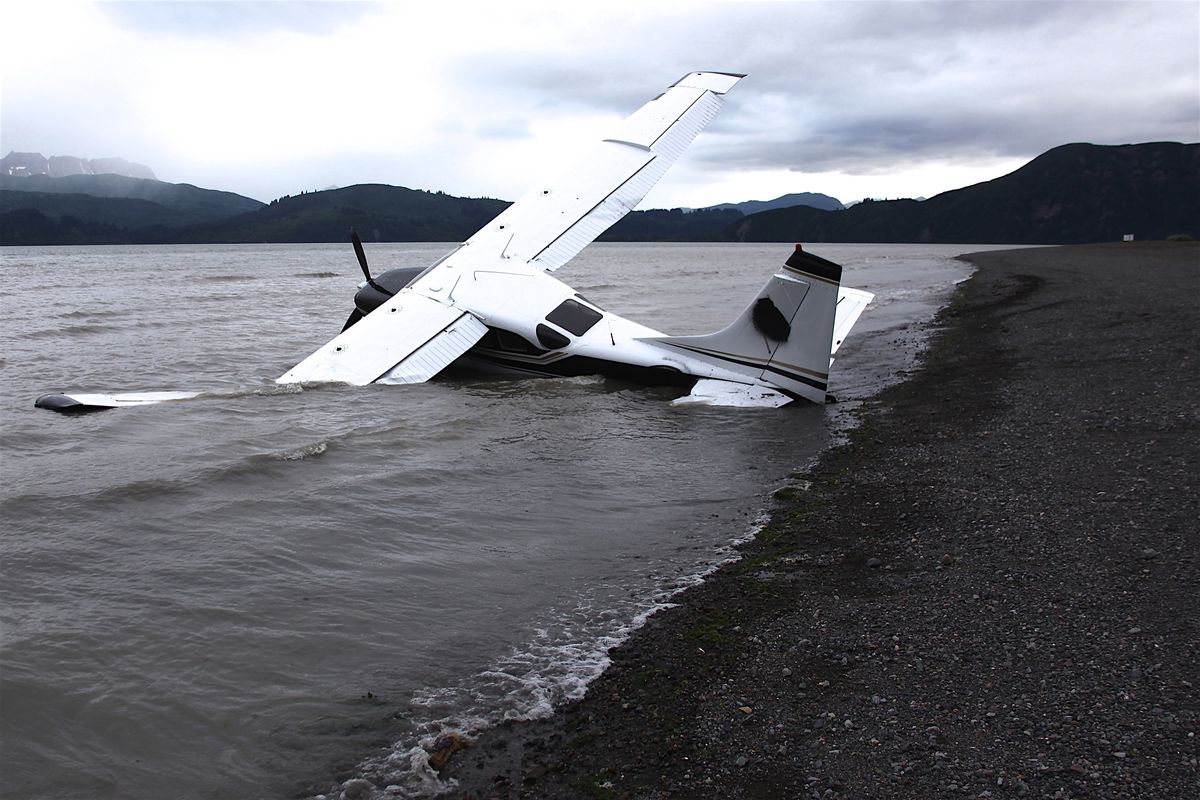 No one was hurt when a plane carrying six people crash-landed last weekend at Chinitna Bay — but it was the fourth such incident on a popular Cook Inlet bear-viewing beach since 2016.

The crash comes amid growing concerns that sharply increasing bear-viewing traffic at the remote stretch of coastline may be putting people — and bears — at risk.

The surge in traffic to Chinitna is also prompting trespassing, liability and wildlife concerns for the Seldovia Native Association, which owns part of the bay's coastline.

The National Park Service is also weighing what, if any, steps to take to address a recent sixfold increase in visitors drawn by the lure of seeing wild bears in Lake Clark National Park and Preserve.

The park is at the base of the Alaska Peninsula north of Katmai National Park, 65 miles northwest of Homer and about 120 miles southwest of Anchorage. Planes from Homer, Kenai and Anchorage ferry thousands of visitors to the park's wild Cook Inlet coastline.

At Chinitna, they can see upward of two dozen bears on a summer day catching salmon, munching clams or grazing on sedge grasses that make a scenic green foreground to open views of mountain-backed water.

The plane involved in the hard landing at Chinitna last Saturday ended up partly submerged. A photo taken by the owner of a nearby lodge shows the identifying number on the plane's tail apparently blacked out with paint.

The pilot reported the incident to the National Transportation Safety Board, according to Clint Johnson, the agency's Alaska chief. He had heard reports about the concealed number but had no direct information.

The NTSB is investigating, Johnson said. It appears the right main landing gear collapsed when the plane landed on the beach, causing substantial damage but no injuries, he said.

The "N" number for the aircraft provided by the Federal Aviation Administration is connected to Homer air service K Bay Air.

A K Bay representative on Wednesday said "no comment" several times when asked about the incident and the blacked-out identification.

The FAA is looking into the incident but had no additional information pending completion of the investigation, a spokesman said.

But generally, the association believes bear viewing planes routinely land or taxi without permission, Kashevaroff said. He's concerned about liability if anyone is hurt or worse in a crash.

Kashevaroff said he's heard reports of someone in an airboat "chasing" bears.

The Native association, with more than 400 shareholders, posted signs on its beach recently "to try to keep the airplanes from landing and disrupting the bears," he said.

"We don't own the water so I can't do anything about that, but we do own the land, so we want to make sure the bears aren't getting harassed by the amount of folks getting flown in there."

Someone not affiliated with the Native association — they don't know who — took down the signs almost immediately, he said.

The Native association offers permits for commercial operators for "a few thousand bucks," Kashevaroff said. Only two companies have gone through that process: a helicopter company and an air carrier used by a nearby lodge.

The association's lawyers have asked two other air services for the specific location of their bear-viewing landing and takeoff locations but have not yet received a response, Kashevaroff said.

"Sometimes there's eight planes up there at one time with bear-viewing customers," Hojohn said. "I've always said it's an accident waiting to happen."

A National Park Service count showed that roughly 6,500 people described bear viewing as the reason for their visit last year, according to park spokeswoman Megan Richotte. Just 1,000 called bears a priority in 2007.

The huge increase doesn't include a similar increase in the number of people who made photography their main use — often to take pictures of bears, Richotte said.

The park service this year embarked on a two-year visitor survey based on the increase.

The survey isn't necessarily going to lead to bear viewing restrictions, she said.

"Any time we see this sort of large increase, or change in visitation, we want to take a look at our park and make sure we're appropriately managing this nationally significant place."