NTSB: Pilot saw ‘flash from left’ before midair collision near Ketchikan that killed 6 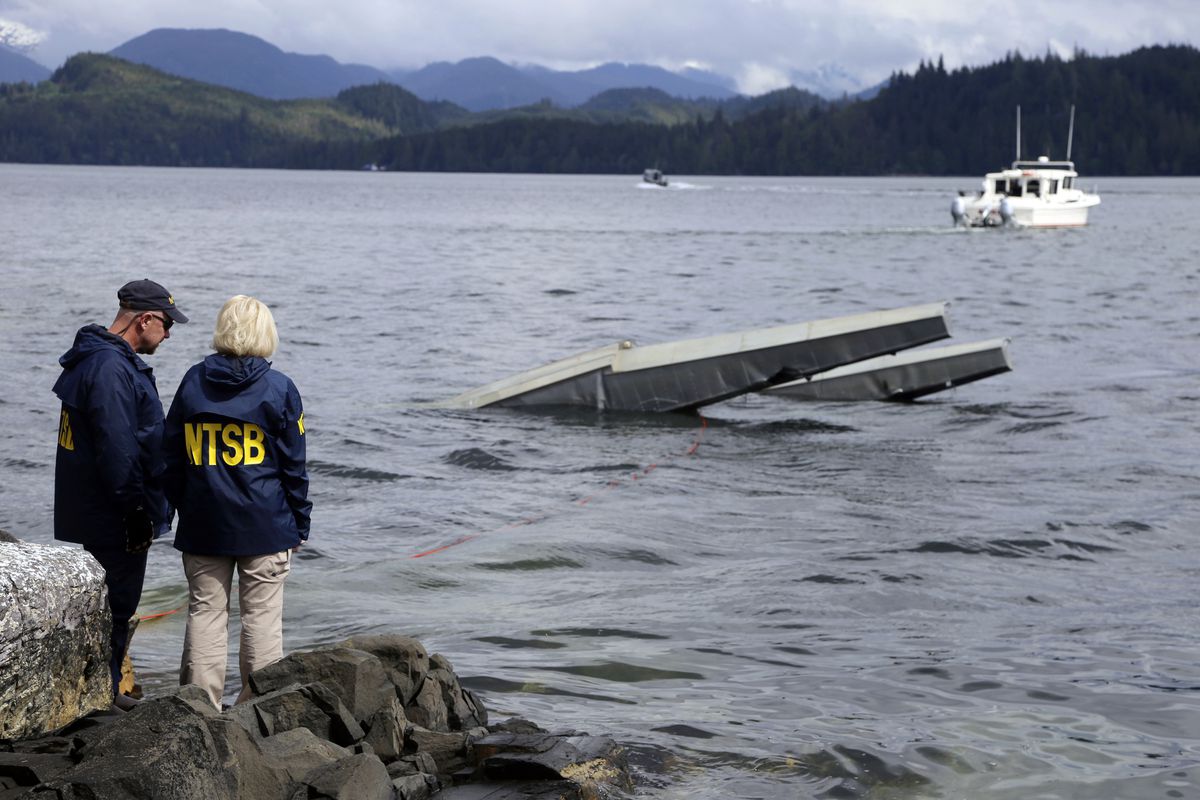 The Taquan Air pilot involved in a deadly midair collision near Ketchikan last week descended to show his 10 passengers a waterfall before he saw a flash to the left and the planes slammed together, according to the National Transportation Safety Board.

Six people died and 10 were injured in the crash with a Mountain Air Service floatplane that involved a total of 14 passengers off the same cruise ship.

It was a clear, 60-degree day in Ketchikan, with 10 miles of visibility and light winds, according to a preliminary NTSB report released Wednesday.

The Taquan pilot, who has not been named, told investigators he didn’t see any other nearby planes on a display intended to help avoid collisions.

He managed to somewhat control the floatplane as it careened to the right and began dropping toward the water, states the report written by lead investigator Aaron M. Sauer.

The pilot told investigators that, after an uneventful trip to Misty Fjords, he was maneuvering to show passengers the waterfall near Mahoney Lake.

Suddenly, the Taquan pilot said, he “saw a flash from his left side, and experienced a large, loud impact," the report states. The pilot told investigators the Otter rolled right and pitched about 40 degrees nose-down down toward George Inlet but he was able to “flare” it -- raise the nose to slow descent -- before the plane hit the water about five seconds later.

The pilot, some passengers and some bystanders helped the passengers of the DHC-3 evacuate and move to the shore, according to the report. The plane was damaged and the pilot received minor injuries. One passenger, trapped in the wreckage, died. Nine others received serious injuries.

The other floatplane, operated by Mountain Air Service, broke up during the collision and went into an uncontrolled descent, crashing into tree-covered terrain and water, according to the report. Pilot Randy Sullivan and all four passengers died.

He last recalled looking at his display flying over Carroll Inlet, an area several miles to the east on a route recommended in a voluntary agreement between local air services.

The report repeats the finding from investigators last week that the Taquan plane descended prior to the collision, though less sharply than originally described.

The planes came together at about 3,350 feet altitude near the west side of George Inlet, according to preliminary flight track data referenced in Wednesday’s preliminary report.

The wreckage of the planes came to rest nearly two miles apart, according to the NTSB report.

The main Taquan Air wreckage was found about 80 feet underwater and 400 feet off the east shore of George Inlet northeast of the other plane’s debris field. Its floats had separated.

Neither plane was equipped with a crashworthy flight data or cockpit voice recorder and wasn’t required to be, investigators found. Several avionics components and personal electronic devices were recovered and shipped to the NTSB Vehicle Recorders Laboratory in Washington, D.C., for further examination.

The Otter was operated by Venture Travel LLC, which does business as Taquan Air, and registered to Nevada-based Pantechnicon Aviation Ltd., according to the report.

The floatplanes carried passengers from the same cruise ship, the Royal Princess, which docked in Ketchikan that morning on the megaship’s inaugural Alaska run from Vancouver to Whittier.

Taquan suspended pre-ticketed cruise excursions but after a temporary halt continued flying commuter and other scheduled flights until another fatal crash Monday in Metlakatla that killed pilot Ron Rash, 51, and passenger Sarah Luna, 31, an epidemiologist on a work trip. Following the second crash, Taquan on Tuesday informed the FAA it would suspend all operations.

There was yet another fatal plane crash Tuesday in Prince William Sound after a private pilot crashed into the water, killing a passenger.

NTSB investigators are conducting separate investigations into all three.

The midair crash was at least the fifth fatal crash involving cruise ship passengers on air tour flights in Alaska since a Taquan crash in 2007 that killed five.