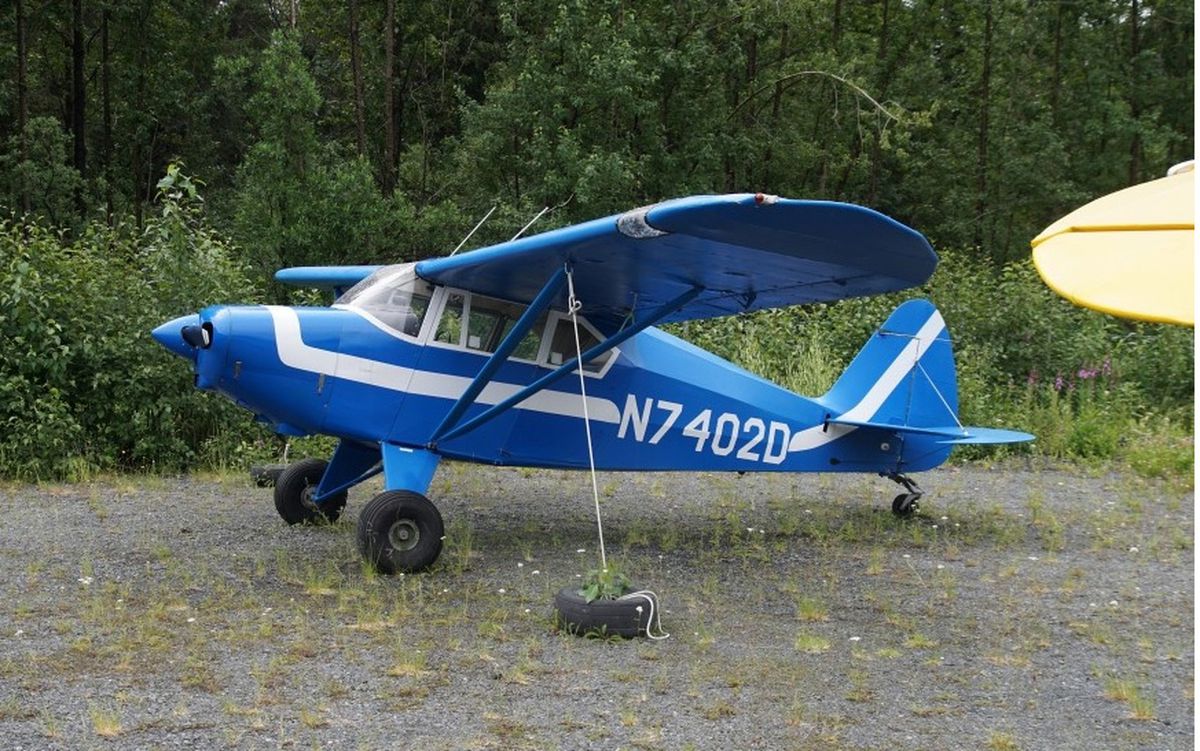 This Piper PA-22, registered to Karl Erickson, was photographed at the Girdwood Airport in 2016. It crashed near the Eagle Glacier Aug. 4, 2019. (Photo by Mike Kemp / Air-Britain Photographic Images Collection)

This Piper PA-22, registered to Karl Erickson, was photographed at the Girdwood Airport in 2016. It crashed near the Eagle Glacier Aug. 4, 2019. (Photo by Mike Kemp / Air-Britain Photographic Images Collection)

A plane that crashed this month near Girdwood, killing all four people aboard, was seen doing “aggressive flight maneuvers” before it smashed into the face of a mountain, a new federal report says.

The Piper PA-22-150 left Girdwood at about 4:15 p.m. Sunday, Aug. 4, and crashed about 15 minutes later in steep rocky terrain at about 5,000 feet on Goat Mountain near Eagle Glacier. A group of elite skiers in training on the glacier saw it go down and burst into flames.

The crash killed the plane’s owner, Karl Erickson, and 37-year-old Paul Wiley, the adopted grandson of a friend of Erickson’s from Arizona. Two other crash victims had not been officially identified as of Thursday morning.

The report indicates Erickson, a student pilot, was a passenger. Another person in the plane, an airline transport pilot and flight instructor, was described as the pilot.

That’s based on federal regulations that bar student pilots from flying passengers, according to Clint Johnson, Alaska chief for the National Transportation Safety Board. The agency doesn’t know for certain who was flying the plane.

It’s likely the plane had dual controls but a post-crash fire destroyed that evidence and also made it impossible to confirm where the occupants were sitting, Johnson said.

A friend of Erickson’s told a federal investigator that the purpose of the flight was to take friends on a 15- to 20-minute aerial tour of the Girdwood valley, which consists of remote, steep, mountainous terrain ranging from sea level to about 7,000 feet in the Chugach Mountains.

Multiple witnesses in the valley saw the plane flying parallel to a mountain ridge before entering a turn to the north and beginning a descent, according to the NTSB preliminary report released Thursday. The plane then disappeared from view, followed by a plume of black smoke. No unusual sounds were heard.

“One witness observed the airplane earlier in the flight performing aggressive flight maneuvers,” NTSB investigator Brice Banning wrote in the report. “He said that as the airplane approached a mountain ridge, it pitched up and entered a steep climb prior to disappearing from view. Shortly thereafter, he was notified of smoke rising from an area known as Goat Mountain.”

Wiley’s relative in Arizona — where Erickson also had property — told the Anchorage Daily News that the transport pilot and flight instructor would be at the controls that day. The friend said the men planned to go up for a quick sightseeing flight, then land and drop off the two passengers before Erickson took the controls for some lessons.

The plane struck the south face of Goat Mountain about 15 feet below the top of a rock-faced ridgeline at about 5,500 feet. The wreckage came to rest on a narrow rock shelf at about 5,430 feet, according to the report. It was largely consumed by a post-crash fire; small fragments were found on the opposite side of the ridge.

A weather station about 22 miles southeast of the crash site showed winds at the time at 7 knots gusting to 15, 10-mile visibility, and overcast clouds at 6,000 feet.