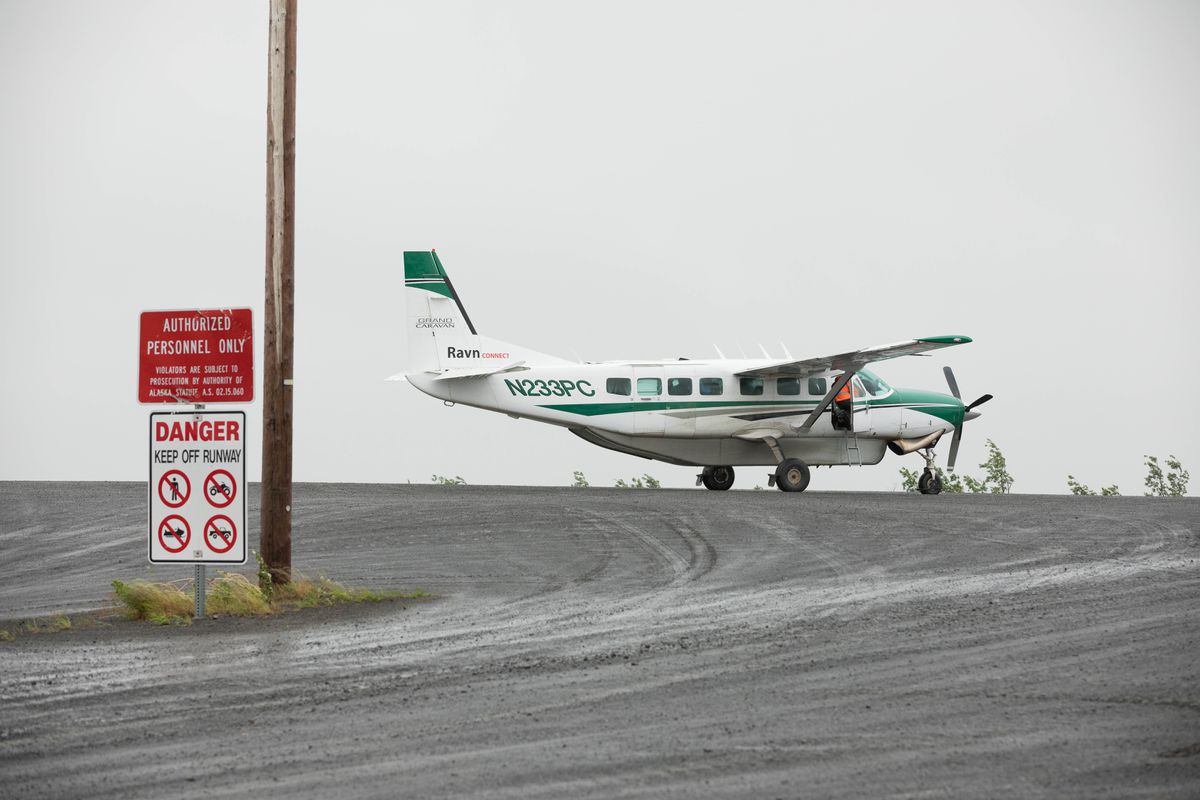 A Cessna Grand Caravan operated by Ravn Air prepares to take off from Mountain Village on June 26, 2019. (Loren Holmes / ADN)

A Cessna Grand Caravan operated by Ravn Air prepares to take off from Mountain Village on June 26, 2019. (Loren Holmes / ADN)

Seeking solutions to excessive airplane crashes in Alaska, the agency that investigates aviation accidents put a spotlight on the problem on Friday in an unusual roundtable in Anchorage with air carriers, regulators and flight experts.

Alaska has deadly terrain and weather, plus limited infrastructure to support pilots, but there are still too many mishaps causing injury and death, said Robert Sumwalt, chairman of the National Transportation Board.

“It’s easy to say Alaska is different, but that doesn’t excuse it,” Sumwalt said. “We have to do better.”

More than 100 people attended the all-day event at a University of Alaska Anchorage auditorium. More than 30 experts appeared on panels, with Sumwalt firing questions their way.

Alaska is on track to have one of its worst years for aviation safety in a decade, he said. The NTSB has recorded 63 accidents, 31 deaths and 72 injuries so far this year.

But the meeting did not focus on this year’s accidents or specific companies. Instead, the agency is concerned about the continuing crashes in Alaska over the last decade that have involved so-called “Part 135” operators, the companies that often run air taxis, flightseeing tours and charter flights.

Those operators are not required to meet the same safety requirements as airlines.

Dave Pflieger, president of Ravn Alaska, said the meeting was unusual in that the NTSB was not responding to an accident, but taking proactive steps to reduce problems.

“If we can put a spacecraft on Mars, why can’t we land safely in Alaska?" said Pflieger, a panelist.

He’d like to see the federal government boost support for aviation infrastructure and technology in Alaska, including by providing transponders to small operators that give airborne pilots the location of other planes flying in the area. The transponders can help prevent mid-air collisions.

Ravn’s planes are already equipped with that gear, but Pflieger is concerned with smaller companies, such as hunting guides, that might not be able to afford it, he said.

“If we can raise the bar, we will all benefit,” he said.

Sumwalt, the only NTSB board member attending the meeting, said the agency wants to see improvements that include more training for pilots, more use of standardized safety policies and better technology and infrastructure, he said.

Ray Weber, a UAA associate professor specializing in aviation, said communications and weather gear need to be installed in more areas. As it stands now, pilots across the state must too often travel through dead zones where they can’t get weather details.

The federal government pays for 42 aviation ground stations in Alaska, compared to more than 550 in the Lower 48, officials said.

Joel Kain, director of safety for Temsco helicopters in Ketchikan, said there should be more. Alaska is 20% of the U.S. land mass.

“If the ground stations were doubled, it would still not be enough," Kain said.

Some panelists said part of the problem is high turnover among pilots, making training and safety procedures especially important.

Richard McSpadden, executive director of the Air Safety Institute in Maryland, said the fatal accident rate in Alaska is about 25 to 30 percent higher than in other states. The rate of midair collisions is especially high in Alaska, as a portion of overall crashes.

But he said accidents in Alaska and nationwide have fallen significantly over the last two decades.

The Medallion Foundation, an aviation oversight organization that has granted safety distinctions to Alaska air carriers, was invited to attend but declined, said Sumwalt.

The nonprofit foundation has provided safety training and third-party safety audits, among other programs, to member air carriers in Alaska. But it’s closing its doors on Sept. 15, citing reduced funding from the FAA.

It has come under criticism in recent years following aviation accidents involving some of its member carriers.

Sumwalt said the agency chose not to attend so it could focus on its closing.

Sumwalt said the NTSB plans to take what it learned from the meeting and propose “actionable items that can truly help move the safety needle in Alaska.”

“The worst thing would be to bring all these resources together and at the end of day everyone walk out and say, ‘Wow, that was great,' and have nothing happen,’ " he said.