Nearly 2 months after fatal crash, Unalaskans are struggling to get in the air 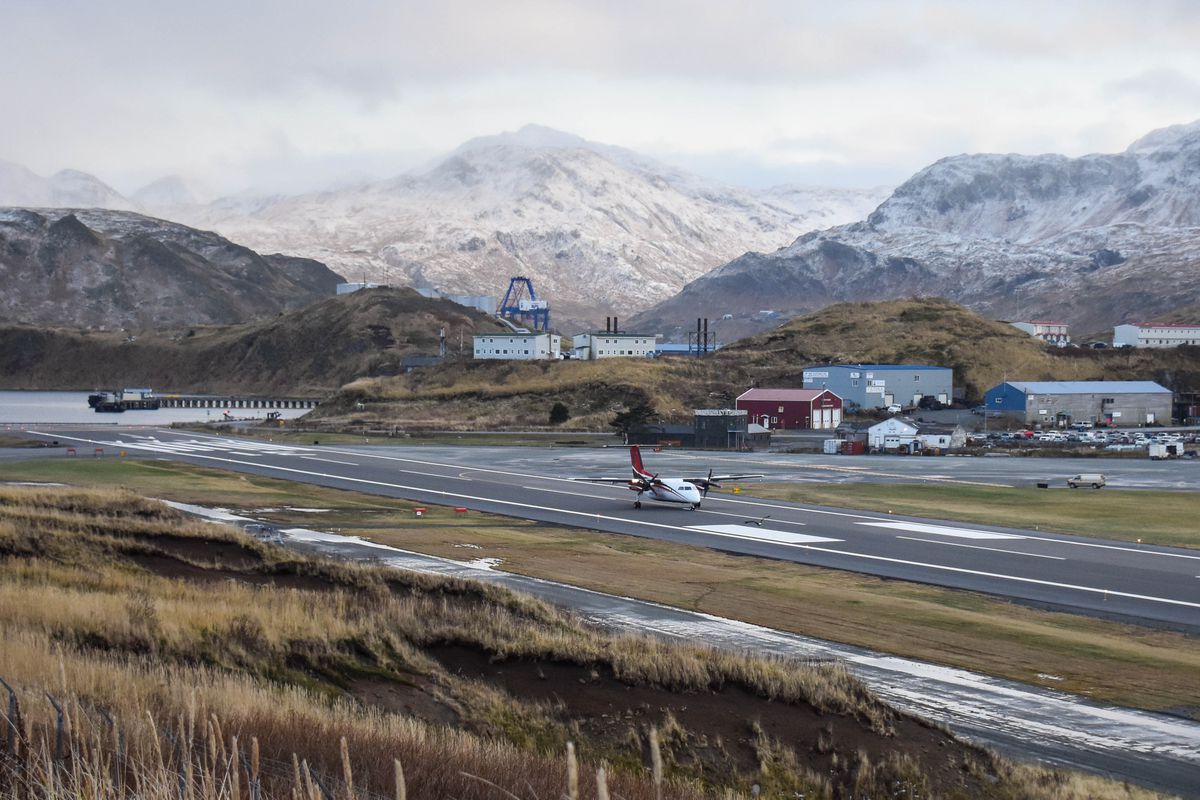 Some Unalaskans are facing the holiday travel season with what they say is a gnawing sense of betrayal and a newly shaken confidence in the air travel that’s the only easy way on and off their Aleutian island.

It’s been nearly two months since a Washington state man died after a twin-engine turboprop Saab 2000 operated by Ravn Air Group with 42 people overshot the Unalaska runway. The death of 38-year-old David Allan Oltman on Oct. 17 marked the first crash-related fatality for a U.S. commercial airline in the last decade.

Federal aviation investigators found the pilot flying that day had relatively little experience at the controls and landed with gusty tailwinds. The crew couldn’t stop the plane, which blew a tire before skidding to a halt just short of the Bering Sea.

Ravn stopped scheduled service for about a month, leading to stranded travelers and a scramble for pricey charter seats. Citing safety concerns with the Saab, Ravn Air Alaska began regular flights in mid-November in a smaller de Havilland Dash 8 that needs to refuel en route unless wind and weather allow direct flights.

For some in this flight-dependent community of 4,000 known for foul weather and Americas’s top seafood hauls, the anxiety is mounting instead of easing with time.

Alaska Airlines, which marketed the route for years, pulled out after the crash and has no plans to resume service. That leaves Unalaskans without the Alaska Airlines mileage program to ease the high cost of travel.

One-way airfare to Anchorage starts at $540.

Some local residents say now they’re paying more but without the trust they once had that pilots can make the challenging trip safely into the weather-battered airport with its relatively short runway.

Lauren Snyder, the 28-year-old education outreach manager at the Museum of the Aleutians in Unalaska, is feeling anxious about flying for the first time in her life.

“I’m not a nervous flier,” Snyder said this week. "There’s uncertainty and I think a lot of it is with training. We don’t necessarily feel that people know what they’re doing. We hope that they do. But we’re not in charge of that.”

RavnAir Group, Alaska’s biggest rural air carrier, serves more than 115 communities in Alaska, many of them villages. The Unalaska crash was the 19th accident involving an airline now affiliated with the Ravn brand since 2008.

Ravn executives did not respond to questions this week from the Daily News.

The busy travel season is compounded in Unalaska by the start of major fishing seasons that crowd planes with thousands of fishermen and processing plant workers headed to the community’s busy port of Dutch Harbor.

Ravn late last month promised to increase flights to as many as seven a day during the peak travel period that starts after Christmas and runs into late January. The new schedule includes seats reserved on each flight for local Unalaska residents.

Ravn is also offering new members of its “Fly Away" rewards program double points on flights to and from Unalaska through the end of the month.

Some travelers say they’re trying to give Ravn the benefit of the doubt.

At least there are “a lot more flights” going now, even if it is because Ravn is using a smaller plane that seats fewer passengers, said Toni Rae Osiecki, a speech therapist from Chugiak who was waiting for a weather-delayed Ravn flight from Anchorage to Unalaska just after noon Thursday. “Everything in the name of safety, I can respect and get behind.”

But the communications piece is lacking, she said.

Osiecki thought she arrived at the airport with enough time to make her 9:45 a.m. flight but was told it was leaving at 9 and she was too late. She’d received no notice the flight time had changed from the one on her ticket, originally booked before the crash through Alaska Airlines.

“I recommend Ravn has an app just like Alaska where flight changes are communicated,” she said. “That would be really great.”

The loss of the Alaska Airlines mileage plan is making travel much more expensive, numerous Unalaskans say. One said she’s delaying a move because of the cost of flying with her children at full price instead of mileage-discounted tickets.

Doug Leggett, a longshoreman who’s lived in Unalaska since the late 1980s, said he’s flown tens of thousands of miles on Alaska Airlines to rack up benefits and paid for miles, which still ends up being a better deal than paying cash. People in town made a habit of using miles-earning credit cards everywhere — to get gas, groceries — just to help with travel.

This week, Leggett was piecing together a flight home from an East Coast college for his son with a new cost: the steep price of getting him to Unalaska without miles plus diminished faith in the plane he’ll ride.

“On top of that is the safety of now putting your kid on a flight that you don’t have confidence in," he said. “I think the community has a confidence problem. We need confidence in the safety but we’ve also built our economy and family models on being able to travel in and out and use that mileage. We’ve invested real money in it.”

Part of the problem is a lack of information from the airlines about what’s happening, he said. Why isn’t Ravn flying the Saab 2000 to Unalaska? What if any training changes are happening?

“We’re having a one-way conversation with ourselves,” Leggett said. “We can speak out but we don’t get any feedback.”

Alaska Airlines addressed the mileage question in a blog post last month: “Travel to and from DUT booked on Ravn will not accrue Alaska Mileage Plan miles. There is no change to accrual or redemption on Ravn to other destinations. When and if there is a change, we’ll inform the community.”

There was supposed to be a community meeting with Ravn and Alaska Airlines in early December.

On Friday, the city, in a written statement, announced Ravn had decided not to host a meeting in Unalaska or participate in further public forums due to “recent comments made in the news and newspapers about our accident and air service to Unalaska.”

The company does plan to meet with city officials, as well as the school district, visitors’ bureau, clinic and “various seafood companies,” the city statement said. Ravn also will try to provide written answers to questions raised by local radio station KUCB.

Ravn on Saturday issued a different statement to clarify that it did not cancel the community meeting but chose to schedule meetings with local leaders first: "It remains Ravn’s highest priority to meet the needs of Unalaska, its residents, its businesses, and the seafood industry, and once we have finished upcoming leadership meetings, we will set a date for a meeting with the community.”

One of the questions that keeps bubbling up from residents is about the plane Ravn isn’t using.

After the crash, the company suspended its use of the Saab on the Unalaska route, citing safety concerns. Ravn has said it hoped to restart the use of the plane in partnership with Alaska Airlines, but only after learning more about the cause of the crash from investigators.

But Ravn continues to use the same plane to serve other communities including nearby Cold Bay and Kodiak, according to online ticketing information.

The Saab aircraft became part of the Ravn fleet last year during bankruptcy proceedings for the longtime Unalaska carrier, Peninsula Airways aka PenAir. A company called Peninsula Aviation Services Inc. made the bid through private equity firm J.F. Lehman & Co., which is an affiliate of Ravn Air Group.

PenAir flew a 30-seat Saab 340 to Unalaska starting in 1992 and switched to the larger Saab 2000 four or five years ago, according to founder Orin Seybert, who is 83 now.

Seybert called the Saab 2000 a plane "designed” for trips to Unalaska given the notorious weather. The Saab is a turboprop that can carry 45 passengers, reach 30,000 feet, travel 400 mph and still land on a 4,000-foot runway.

The National Transportation Safety Board last month said the crash pilot had 14,000 hours experience in a Dash 8 but only 101 in the Saab. Seybert said PenAir required a 300-hour minimum plus at least two “check” rides with a senior pilot.

A page from the PenAir operations manual in April, after ownership changed hands, shows a new provision that the minimum hours requirement can be waived for a pilot with 100 hours in the plane with a letter of recommendation from a check airman that’s approved by the chief pilot.

“Which just of course destroyed the usefulness of the whole thing,” Seybert said. “And that’s what happened.”

Karen Kresh and her partner are flying to Anchorage in December, a month before their baby is due. That’s standard practice on the island.

“I’m relieved that things have stabilized a bit, but there is still a lot of uncertainty," Kresh said in an email.

What’s not standard is paying for tickets with cash instead of miles, or new baggage restrictions that make stocking up on baby necessities less practical.

But then, uncertainty and expense are part of living in Unalaska, and becoming a new parent, she said. “More than anything, I want to know that the Dash 8s and the Ravn pilots are safe, especially planning to land on that Dutch Harbor runway with a newborn, and I haven’t heard or seen anything to assure me of that safety yet.”