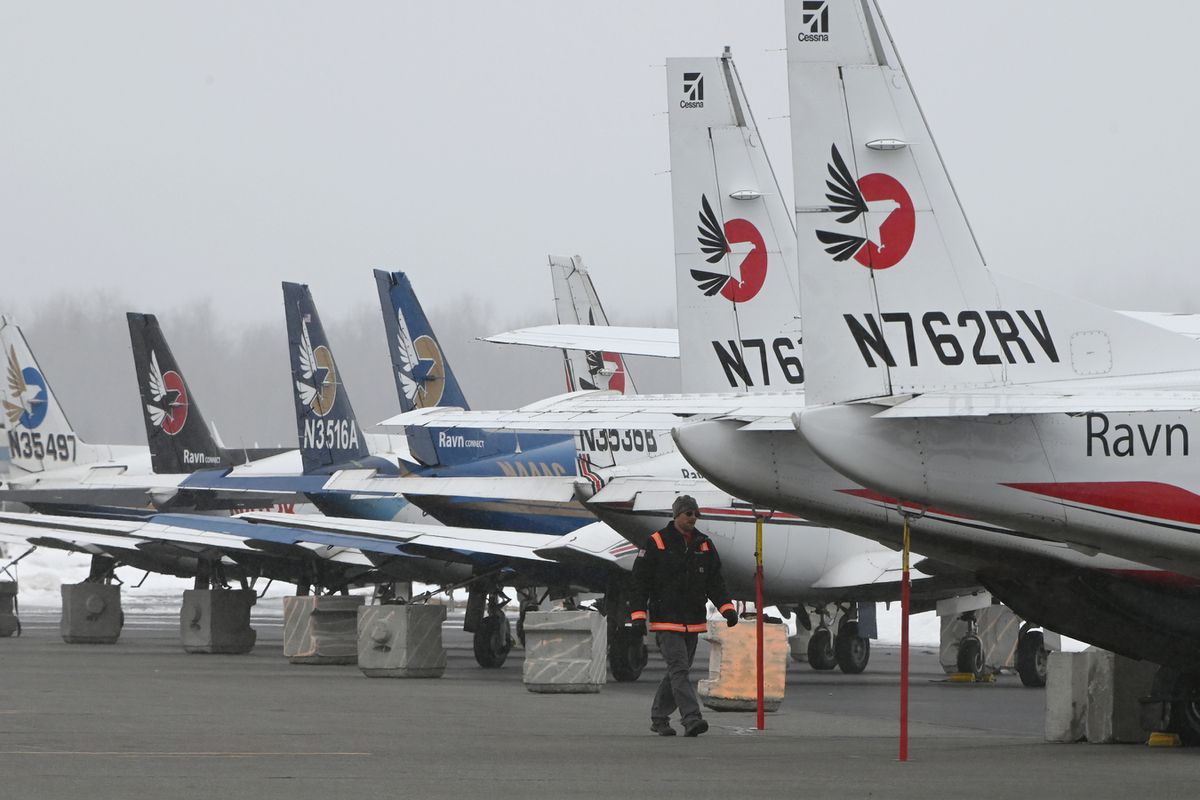 Some of the Ravn Connect Part 135 aircraft that served rural Alaska were parked at Palmer Municipal Airport on April 2, 2020. (Bill Roth / ADN)

Some of the Ravn Connect Part 135 aircraft that served rural Alaska were parked at Palmer Municipal Airport on April 2, 2020. (Bill Roth / ADN)

Alaska’s largest rural airline is working to prevent a liquidation of its assets sought by a bank representing lenders seeking payment of $90 million in debt.

RavnAir Group has touted $30 million in federal COVID-19 aid that the carrier said the government could grant if a potential buyer is found, Alaska’s Energy Desk reported Thursday.

Advertisements to sell the company have appeared in the Anchorage Daily News and the Wall Street Journal, while court documents said a half-dozen potential buyers have signed non-disclosure agreements to review sensitive company data.

RavnAir cited the economic impact of the coronavirus when the company halted operations April 5, laying off staff and filing for Chapter 11 bankruptcy protection.

RavnAir is majority-owned by private equity companies J.F. Lehman and Co. and W Capital Partners LLC. Before the pandemic, the company operated 72 planes and had 1,300 workers.

"If it comes together that there's somebody who's interested in taking the (federal) money and funding a plan, that would be great news," BNP Paribas attorney David Neier said at a federal bankruptcy hearing Wednesday.

"But we're not giving up the liquidation process because there is no other path that has emerged that will work with this estate," Neier said.

RavnAir owes millions of dollars to an array of businesses inside and beyond Alaska known as "unsecured creditors" in the bankruptcy case.

Those companies would benefit from the airline remaining intact and generating revenue, but their claims rank behind the $90 million in debts to the "secured creditors" represented by BNP Paribas.

RavnAir estimates a liquidation would raise no more than $41 million, which would not be enough to pay the claims of unsecured creditors including Anchorage-based Petro Star Inc., GCI LLC and Northern Air Cargo Inc.

For most people, the coronavirus causes mild or moderate symptoms, such as fever and cough that clear up in two to three weeks. For some, especially older adults and people with existing health problems, it can cause more severe illness, including pneumonia and death. The vast majority of people recover.