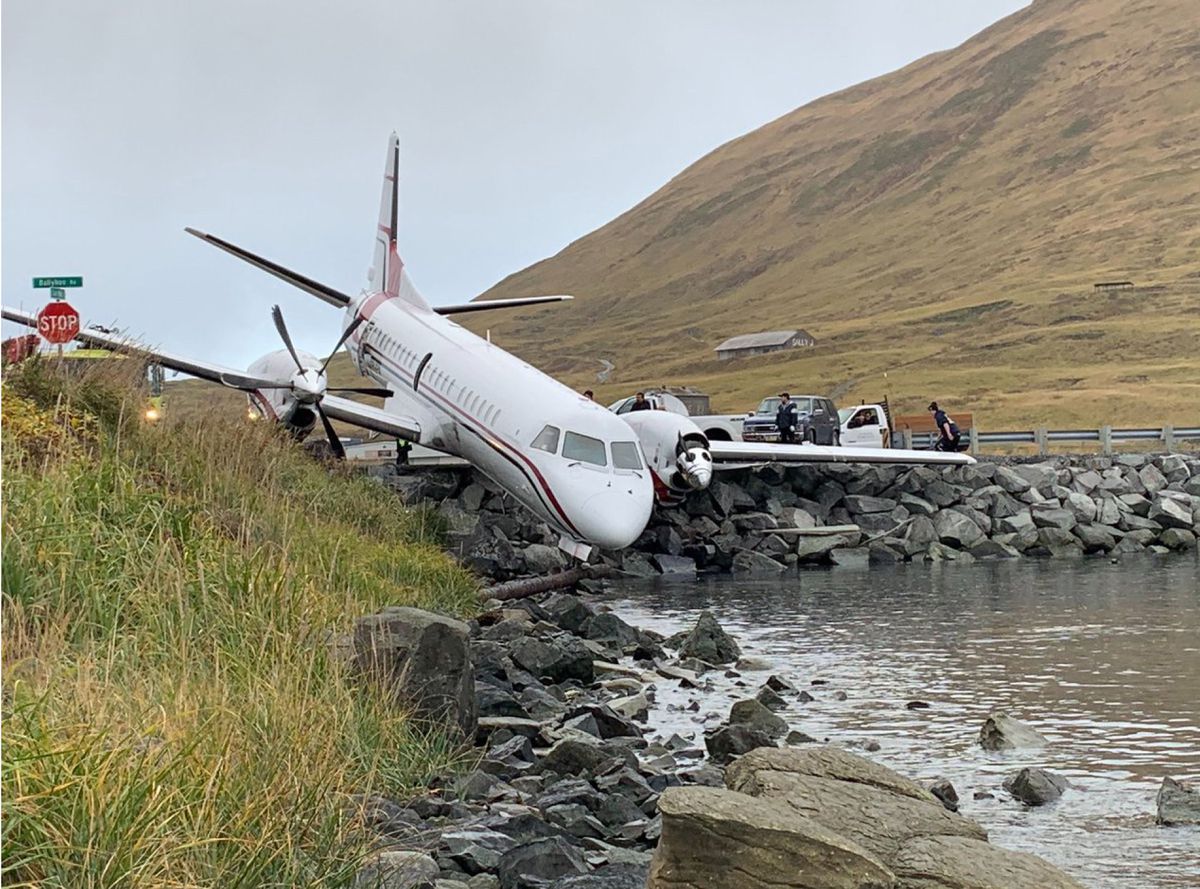 A Saab 2000 twin-engine turboprop crashed at the Unalaska airport Oct. 17, 2019, killing one passenger and injuring four others. (National Transportation Safety Board photo)

A Saab 2000 twin-engine turboprop crashed at the Unalaska airport Oct. 17, 2019, killing one passenger and injuring four others. (National Transportation Safety Board photo)

Investigators found problems with an anti-skid device after the crash of a Saab 2000 turboprop last year at Unalaska’s airport that left one passenger dead and several injured, according to federal documents released this week.

The Ravn Air Group pilots who landed in gusty, shifting winds on Oct. 17, 2019, lacked the flying time traditionally required for the challenging landing in notorious Aleutian weather on a short runway, according to a massive fact-finding docket released Wednesday by the National Transportation Safety Board.

A report that’s part of the docket also describes concerns about Ravn’s safety culture at the time.

During landing after a second approach to Unalaska in windy conditions with 39 passengers and three crew, the plane careened off the runway, crashing through a perimeter fence and across a road before coming to rest on rocks at the water’s edge, the front wheel in the water of Dutch Harbor. Shrapnel and part of a propeller sliced into the cabin.

An experienced commercial pilot sitting next to Oltman noted a heavy squall in the distance and wind gusts hitting the water, according to a first-person account included in the docket. The plane landed, then skidded to the right, the man said. He saw water coming at him. The ceiling collapsed and the propeller nearly hit him.

The man, who suffered “moderate” compression fractures, tried to help his critically injured seatmate. A doctor began administering first aid. The forward exit was in the water and the plane’s angle was too steep to evacuate Oltman through the rear, so they waited for medics to arrive.

The man “noted that if he was 2 inches over, he would have been killed,” the account states. “He noted that while he was assisting the victim, someone asked the pilots what happened, and one pilot said something like ‘the computer said we should be ok.’”

Oltman’s death marked the first crash-related fatality for a U.S. commercial airline in the past decade.

The crash flight was sold by Alaska Airlines and marketed under the PenAir name, short for longtime Alaska carrier Peninsula Airways, which flew the Saab 2000s into Unalaska. But the flight was operated by Ravn Air Group subsidiary Peninsula Aviation Services Inc., which bought PenAir’s name and assets including the planes in 2018 after PenAir declared bankruptcy.

Many pilots told investigators morale began to decline in summer 2019 during conversations about reducing qualification minimums for airports like Unalaska, according to the report.

[Nearly 2 months after fatal crash, Unalaskans are struggling to get in the air]

The company’s safety director told investigators “he considered the overall safety culture as ‘still good’ but said that he had pilots approach him saying they were ‘not as comfortable anymore… saying something or making a decision and being questioned on it’ since the new management came in,” the report said.

The docket — a standard practice in major investigations to give the public, operators and family members a chance to see what the investigation is finding — includes hundreds of pages of reports and more than 1,300 pages of interviews alone.

It does not include a probable-cause finding. The five-member safety board is projected to meet to discuss the investigation next year.

Ravn declared bankruptcy in April. Smaller airlines scrambled to fill the route gaps left in the wake of the sudden departure of the state’s largest airline.

Representatives of the former company could not be reached.

Rob McKinney, Ravn Alaska CEO, provided a statement Wednesday: “While we’re a familiar presence in the sky, Ravn Alaska has been rebuilt with new ownership and an entirely new management and operations team. We’re working hard to reintroduce routes quickly, but also intentionally - with close attention to detail, community needs and the highest safety standards.”

‘It was pretty violent’

The docket identifies the flight crew on the flight as first officer Justin Lunn, 39, and captain Paul Wells, 56.

Lunn had about 140 hours in the Saab 2000 and had flown into Unalaska 15 times before with PenAir, according to the report. Hired in May 2019, Lunn said his only prior Alaska flying experience was as a flight instructor, and between Homer and Anchorage and Anchorage and Talkeetna.

Wells had 101 hours of flying time in the Saab 2000 and was on his 10th flight with PenAir into Unalaska when the crash occurred, according to the report. He had a lengthy flying career in Alaska starting around 1990 with Era Aviation. He retired in 2012 and came back with Ravn as training director in May 2019.

Both pilots told investigators they decided to go around for a second approach after Wells got distracted momentarily as he switched off engine anti-ice switches, putting them too high for a safe landing.

Lunn said a wind check from an airport observer didn’t indicate a tailwind or other reasons to change landing plans, though there was a lot of radio chatter at that time.

The plane’s cockpit voice recorder captured the pilots momentarily debating the direction they’d land and agreeing to stick to the original path.

About two minutes before the plane landed, a weather observer told a Lifemed plane coming in next that the conditions were “perfect” to land in the other direction.

PenAir co-founder Orin Seybert has said that no aircraft, including the Saab, could have landed safely in a gusty tailwind.

The plane touched down at 145 mph and then dropped to about 92 mph — but then didn’t keep slowing down as usual, the first officer told investigators.

On the voice recorder, the flight attendant can be heard saying, “on behalf of PenAir and Alaska Airlines, we’d like to welcome you to ... Dutch Harbor.”

Meanwhile, in the cockpit, the flight crew is struggling to stop the plane. One says “hang on.” There’s the sound of two thumps. “I’m sliding,” the pilot says.

Both pilots said they applied full brakes and maximum reverse thrust. One said it was like hitting a patch of ice.

Wells told investigators there wasn’t any “pulsing or ‘chattering’ of the brakes, typically felt when the anti-skid system was engaged,” the report states.

Lunn called for the plane to be steered to the right so it didn’t go straight off the runway and into the water.

“We were going to hit the ditch. I don’t know what else was there. I know it was a pretty violent -- when we hit by where the road was, it was pretty violent,” he said, according to a transcript of an interview two days after the crash. “And the plane lurched up and then back down, and we started to go down the embankment towards the water, but it came to a rest.”

Wells, in a separate interview, described having a fleeting thought of trying to get back up in the air and realizing that was impossible.

“I just said I have to try and stop it because I can’t get off the ground,” he said, according to a transcript of that interview.

The plane stopped. A left engine fire light came on. Wells alerted emergency responders. The flight attendant called out for passengers to evacuate. The fire alert went off.

Wells was the last off the plane. By then, it was cold and raining.

Lunn, who said he has a master’s in aeronautics from Embry-Riddle, told investigators he was familiar with their process.

“I know exactly what you guys do. I’ve done a lot of case studies,” he said during his interview. “And one of the things that I’m struggling with right now is -- you know, I’ve done all those case studies; I’ve seen it. Now I’m going to be one. And it’s hard.”

The pilots have not been rehired, though it’s not clear they applied again, a Ravn spokesman said Wednesday.

Part of the docket was a report on the Saab 2000′s systems and structures that described a mechanical issue that could have affected the interplay between the brakes and the plane’s anti-skid controls.

The investigation into the plane’s anti-skid system on the left side of the plane discovered a problem with crossed wiring, according to the report. Wire harnesses on the left gear wheel speed transducer “were incorrectly installed,” the report said. Right gear wire harnesses were installed correctly.

Crossed wires could cause problems with the brakes not releasing on the left side of a plane, according to an analysis provided in the report by Crane, manufacturer of the anti-skid system.

The report does not make clear when the wires were swapped.

The report also references what at least some employees described as Ravn’s push to reduce the qualifications for pilots flying into Unalaska.

PenAir had required a minimum of 300 hours of flying time in the planes, with a 100-hour waiver only for pilots with substantial experience. By summer 2019, pilots told federal investigators, Ravn was talking about reducing the requirement to 100 hours, removing the requirement entirely provided the pilot had check airman approval, or keeping the 300-hour requirement but in right or left seat.

The report quotes a Ravn vice president of operations saying the 300-hour minimum didn’t track with airlines in the Lower 48: “I’m not convinced that it’s necessary because it’s not done elsewhere. There are mountains around the country, around the world. Air is air. Physics are physics. Why is this different?”

Several senior pilots and check airmen voiced concerns about the potential change to reduce qualification requirements, the report said. Asked about the pilot concerns, the chief pilot “stated that several pilots voiced concerns, but she didn’t ask them why, stating ‘I just assumed it was because they thought Dutch Harbor was an airport, a special airport.’”