The last photo: A passenger’s chilling image just before a deadly midair collision near Ketchikan 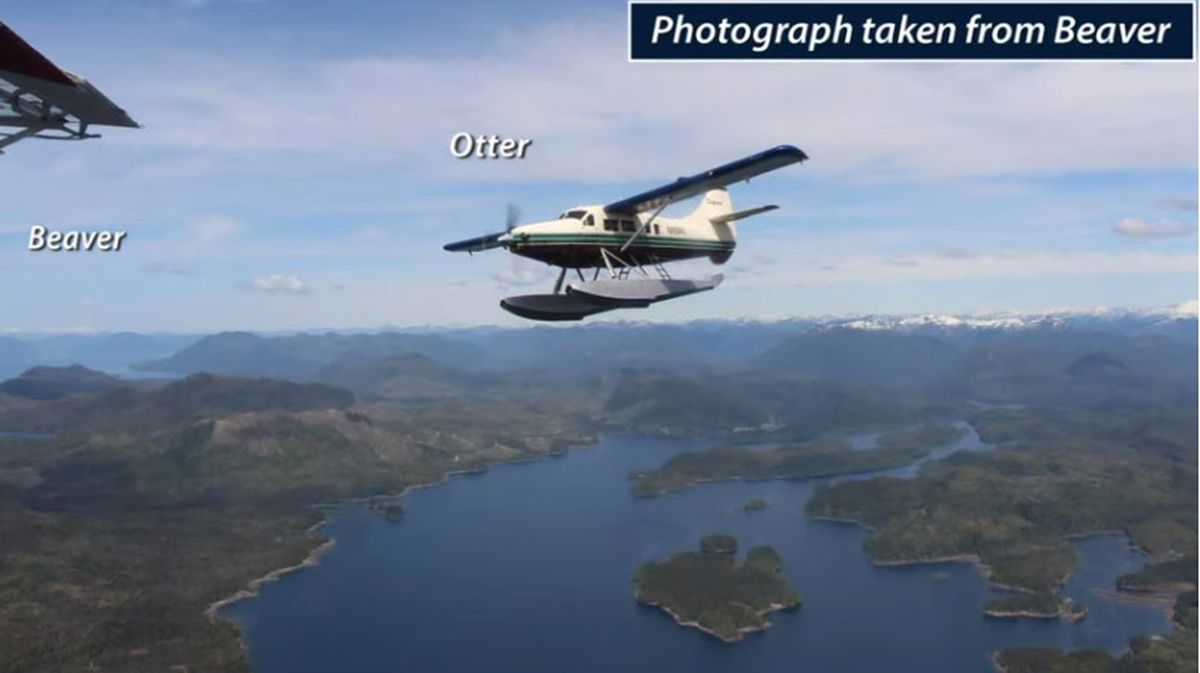 This photograph of a plane involved in a midair collision near Ketchikan was taken by a passenger seconds before the May 13, 2019 accident over George Inlet that killed six people and injured 10. (Screenshot of NTSB video)

This photograph of a plane involved in a midair collision near Ketchikan was taken by a passenger seconds before the May 13, 2019 accident over George Inlet that killed six people and injured 10. (Screenshot of NTSB video)

A photo snapped just before a deadly midair collision in May 2019 between two flightseeing floatplanes near Ketchikan became a pivotal part of a federal investigation that wrapped up this week.

Taken by a passenger in the Beaver, the image shows the Otter so close its passengers can be seen looking out the rear windows.

No one in the Beaver survived.

But somehow, the passenger’s Canon EOS Rebel digital camera withstood the 3,350-foot drop to the ground below, National Transportation Safety Board investigators say. They found it as they, with the help of volunteer searchers, combed through a 3,000-foot field of debris scattered across land and water.

“That was the last photo that was on the camera,” chief investigator Aaron Sauer said this week.

The photo showed that the Otter’s pilot couldn’t see the Beaver just before the crash because a window post obscured his vision, investigators say. The Beaver pilot’s view of the Otter was blocked by a passenger and parts of his own plane.

The information in the photo was highlighted Tuesday when the five-member National Transportation Safety Board met virtually and unanimously approved a probable cause for the collision: The pilots didn’t see each other because their views were partly obstructed, and didn’t get audible alerts before the crash because of disabled or missing systems linked in part to a Federal Aviation Administration equipment update.

Video of the April 20,2021, NTSB public meeting on its investigation into the May 13, 2019, midair collision of two air tour airplanes near Ketchikan, Alaska, is now available at https://t.co/uf351fHmiH

The Ketchikan-based floatplanes carried passengers from the same cruise megaship, the Royal Princess, on a 25-minute flightseeing tour of Misty Fjords National Monument before returning to the ship.

Mountain Air pilot Randy Sullivan, a 46-year-old Ketchikan native who started the air service, died in the crash, as did his four passengers. Pilot Lou Beck, 60 at the time, crash-landed the Otter in the frigid water of George Inlet. One passenger drowned and nine suffered serious injuries, treading water with broken bones while they waited for rescue.

The photo also helped fine-tune the accuracy of an animated reenactment played during Tuesday’s hearing.

The reenactment video shows the Beaver and Otter left Misty Fjords about a minute apart. The Beaver took a more direct route. The Otter curved north to a higher altitude over mountainous terrain, then descended before their paths merged.

An animation shifts to the view from a third-row passenger seat in the Beaver as the other plane suddenly appears and quickly approaches.

Suddenly, the animation ends, replaced with the actual photograph taken by the passenger in the Beaver: the Otter, to the right and just back of the plane’s wing.

That photo was probably taken a little over a second before the collision, Sauer said.

“Obviously, those pictures are important for us,” he said.

The agency declined to identify the person who took the photo.

The passenger who died in the Otter was 62-year-old Cassandra Webb from St. Louis.

Beck told NTSB investigators he fought to maintain control as he hurtled toward the water, the wind roaring through his blown-out windscreen, but managed to get the plane to “flare” before impact.

The National Transportation Safety Board on Tuesday recommended the Federal Aviation Administration require traffic alerts that can prevent collisions in high-traffic tour areas around the country.