A quarter of Anchorage women have been victims of stalking, survey indicates

Anchorage's rates of stalking are slightly lower than the average for Alaska but still high, according to data drawn from a 2015 statewide survey as well as local domestic-violence responders.

The numbers, released in late January, are among the latest products of the Alaska Victimization Survey, a telephone survey of more than 3,000 Alaska women. A total of 1,137 Anchorage women's responses were compiled in the survey, produced by the University of Alaska Anchorage Justice Center and the state Council on Domestic Violence and Sexual Assault. 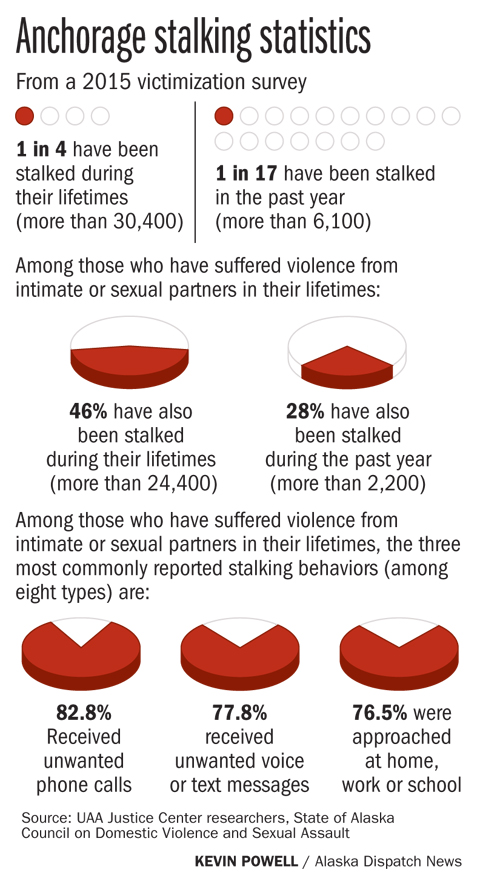 The justice center's director, André Rosay, said researchers had hoped to discover regional differences between stalking rates so their causes could be examined. Instead, the difference between the Anchorage and statewide rates was so flat that they're considered statistically insignificant.

In line with the state's legal definition of stalking, the survey asked respondents if they had experienced two or more incidents involving the same person, which occurred against their will and placed them in fear.

The types of stalking behaviors most commonly encountered in Anchorage also match those across the state: Just over 80 percent of women stalked in their lifetimes reported unwanted phone calls, closely followed by unwanted voice or text messages and being approached at home, work or school.

"There's really no difference: What we're seeing at the statewide level (is) the same in Anchorage," Rosay said. "Not just the rates at which people are stalked, but the ways in which they are stalked, are very similar."

"The connection between domestic violence and stalking is extreme," Pearson said. "It's a significant issue with the majority of our participants."

The law offers a number of tools to help victims protect themselves, Pearson said, including restraining orders for stalking, domestic violence and sexual assault. Proving a stalking case in criminal court, however, requires extensive documentation that can take an emotional toll beyond the offense itself.

"Stalking cases are very arduous for a victim to deal with, because they have to keep track of so much information," Pearson said. "If their stalker's doing things that are difficult to prove — they're around the house and nobody else sees them — they become very paranoid."

Stalking remains a "vastly" under-reported crime, according to Rosay. When the statewide survey results were announced, he called for law enforcement to examine sexual-assault cases for signs of stalking, which he said often occurs prior to an assault.

Anchorage Police Department Capt. Bill Miller, who oversees the department's detectives, said investigators often learn of stalking behaviors in sexual-assault cases as they establish links between abusers and the abused.

"While we don't specifically ask the question 'Have you been stalked?' knowing the relationship of the victim in relation to the suspect is important," Miller said.

Police investigators face a wider reporting problem regarding crimes committed within marriages or longtime relationships, in which Miller said victims often don't tell police about sexual assaults or stalking because they consider it part of the relationship.

APD also encounters stalking as a form of witness tampering, Miller said, when domestic-violence suspects approach their victims after being charged. As a result, the department has two officers who work to keep those contacts from occurring the day after suspects in such cases are taken into custody.

Rhonda Street, one of the warrants officers, said stalking behaviors are sometimes charged as violations of restraining orders, because it's easier to demonstrate probable cause for violating an order than build a stalking case.

She said people who have been served with restraining orders frequently disregard them.

"Oftentimes they will be told by a magistrate in booking, 'Do not contact this person,' " Street said. "They'll go right out to the jail phone and make contact with the person."

At AWAIC, the shelter's physical security extends from barbed wire to an extensive network of surveillance cameras — but Pearson said employees still deal with people who try to reach clients staying there.

"It does happen," Pearson said. "You have abusers who know that they're here and will call us, and they'll also call their partners."

Street said police responding to reports of domestic violence and stalking refer victims to local organizations like Standing Together Against Rape and AWAIC. In addition, police walk victims through the steps of filing for court protection.

"When our officers go out on a call, they're required to tell them how to get a restraining order, how to get a stalking order," Street said. "They actually read out of a book, give them the address of the Boney Courthouse, tell them, 'This is how to apply.' "