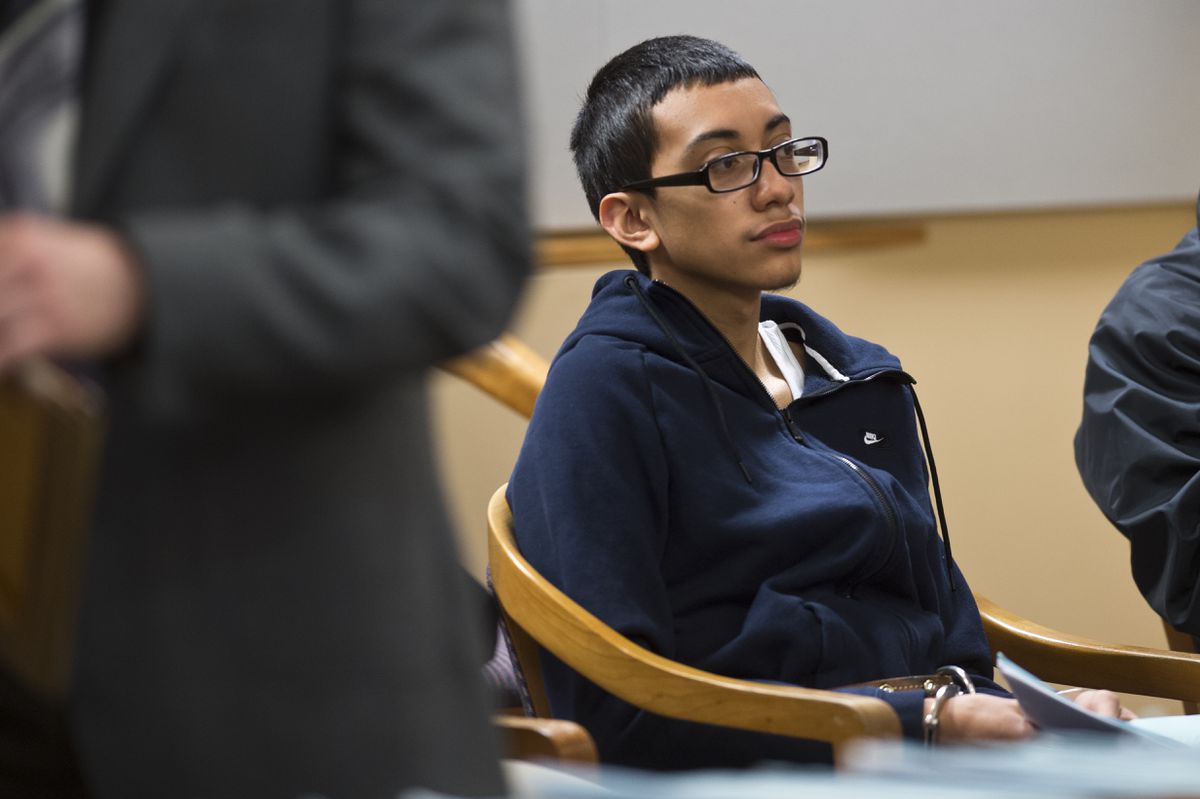 Anthony Salazar was arraigned at the Nesbett Courthouse in Anchorage on Sept. 19, 2017. Salazar, 16, is charged as an adult in the murder of 17-year-old Leroy Lawrence. (Marc Lester / Alaska Dispatch News)

Anthony Salazar was arraigned at the Nesbett Courthouse in Anchorage on Sept. 19, 2017. Salazar, 16, is charged as an adult in the murder of 17-year-old Leroy Lawrence. (Marc Lester / Alaska Dispatch News)

The teenager charged in the fatal shooting of 17-year-old Leroy Lawrence in April made an appearance in an Anchorage courtroom Tuesday, handcuffed and wearing plain clothes.

Anthony Salazar, 16, did not speak during the brief hearing in Anchorage Superior Court attended by Lawrence's family.

Defense attorney Dan Lowery entered a not guilty plea on behalf of Salazar and said he'd pursue a jury trial.

Salazar is being charged as an adult.

A second suspect in the case, 20-year-old Haitim Mahir Taha, had not been arrested as of Tuesday afternoon, said police spokeswoman Renee Oistad.

Police reported Monday that Taha was driving a Chevrolet Monte Carlo on April 7 with Salazar in the passenger seat, following a Ford Escape with multiple people.

The Escape pulled over on a residential street in Mountain View, and as people starting getting out, Taha and Salazar drove by and shot at them, police said. Lawrence, who was walking on the street on his way to a friend's house, was struck by a bullet, they said.

[2 charged with murder in April shooting of Anchorage teen; 1 still at large]

The indictment lists seven charges against both defendants: first- and second-degree murder, three counts of assault, weapons misconduct and criminal mischief. The murder counts are unclassified felonies, carrying sentences of up to 99 years in jail.

The document does not offer additional information about the allegations or the months-long investigation. But it lists numerous witnesses who spoke before a grand jury.

On Tuesday, outside the courtroom, Leroy Lawrence's father said his son did not know Salazar or Taha. The hearing was the first time Gene Lawrence saw Salazar in person.

"(Salazar) is a baby, really," Gene Lawrence said. "There's part of me that wants to look at him like he's a monster, but just that one look at him and I can tell – he's just a baby."

The father lamented that guns are so readily available to young people and said the problem needs fixing, but he's unsure how.