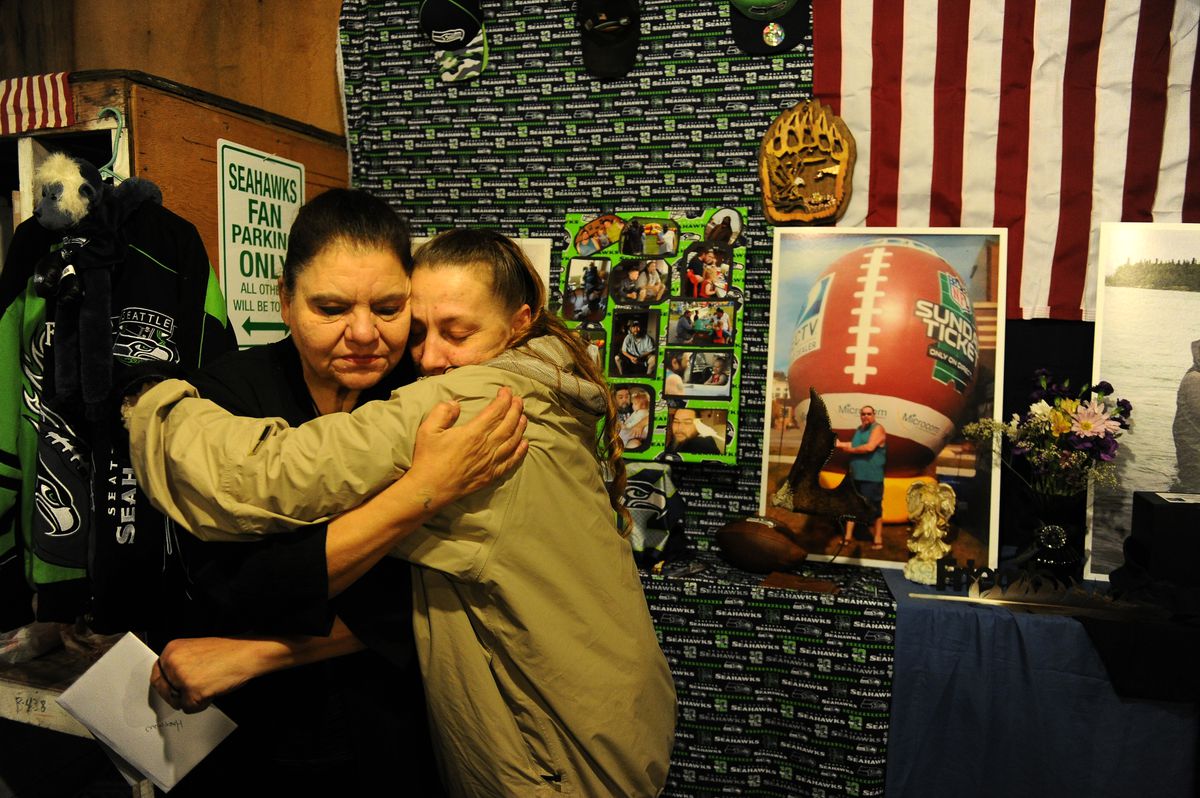 Jayne Hartman, wife of Kenneth Hartman, gets a hug from Orainda Beile during a memorial for the men killed in a shooting at The Bullion Brothers store on Spenard Road. (Bob Hallinen / Alaska Dispatch News)

Jayne Hartman, wife of Kenneth Hartman, gets a hug from Orainda Beile during a memorial for the men killed in a shooting at The Bullion Brothers store on Spenard Road. (Bob Hallinen / Alaska Dispatch News)

The families of two men who died in last week's triple homicide in Anchorage held a memorial Friday in the same commercial complex in Spenard where the shooting occurred, the day after a grand jury brought formal charges against the suspected shooter.

Relatives and friends of Daniel McCreadie, 31, and Kenneth Hartman, 48, shared tears, laughter and memories in a warehouse behind the former Spenard Pawn Shop.

Both men were shot on Sept. 12 in the two-story building next door that contained their apartments and The Bullion Brothers precious metals shop.

McCreadie and Hartman were friends and left their apartments that morning to help their friend Steven Cook, 31 and co-owner of the shop, after hearing gunfire in the building, family said.

A celebration of life for Cook is planned at 2 p.m. Saturday at the Heart of the City Church.

Anchorage police had said 43-year-old Anthony Pisano, a recently retired Army paratrooper, started a fight with Cook before shooting him and then the two other men.

In the warehouse Friday, memorial displays of McCreadie and Hartman with poster-sized photos of the men had been placed side by side, with an American flag draped down the middle.

Daniel McCreadie's side held his welding hoods and other work mementos, including ball caps he'd received as a top welding student at a school in Florida.

McCreadie had just built the shiny black 27-foot trailer in the welding yard joining the two buildings, said his father, Rich McCreadie, whose family welding business had included Daniel. The trailer has six wheels and can haul a few tons or more, Rich said.

"It was his last project," Rich said. "He was good with the metal and he was a super great guy."

Daniel McCreadie's life revolved around his 4-year-old daughter, family said. McCreadie, a single father, had put her on a bus for preschool shortly before the shooting.

The McCreadie family is now taking care of his daughter, who tottered around the warehouse in a sparkly blue dress holding a dragonfly balloon. Photos of father and daughter dominated the memorial for McCreadie, including a centerpiece picture of her sitting on McCreadie's lap.

"And I know you've heard a million times already what a great dad he was," said Kay Worley, McCreadie's mother, after tearfully stroking the container of her son's ashes.

Kenny Hartman's memorial display was full of Seattle Seahawks souvenirs, including a jersey with a big 3, quarterback Russell Wilson's number. The jersey left the closet only on game days, said Jayne, his wife of 12 years.

Hartman had served in the U.S. Navy on the USS America aircraft carrier, running the jet catapult system, friends said. He had a severe back injury and was helping Jayne bring in money by cleaning houses for friends.

The McCreadie family manages the building complex. People who lived in the two-story building where the shooting happened were like family, said Jayne. Residents often gathered over doughnuts and coffee in the gold shop.

Hartman, who was originally from the Prince William Sound area, loved donating to firefighters in the fill-the-boot fundraiser for muscular dystrophy, said Jayne. He'd recently spent $400 for a barbecue in the welding yard.

"He just wanted everyone to be happy," Jayne said. "Without fail, every single day was a nice day with him."

Jayne had wanted to start a day care program in the building, to take care of Daniel McCreadie's daughter but also for other children.

Hartman had advised against it, saying it wasn't a safe idea to have a day care near a gold shop in a town with rising crime in recent years.

Hartman had made Jayne tea in their apartment before gunfire rang out, she said. He left the apartment without a gun to help Cook. McCreadie, who was armed, also left his apartment to help, she said.

"It's unbelievable," Jayne said. "Life is crazy. This town has lost its mind."