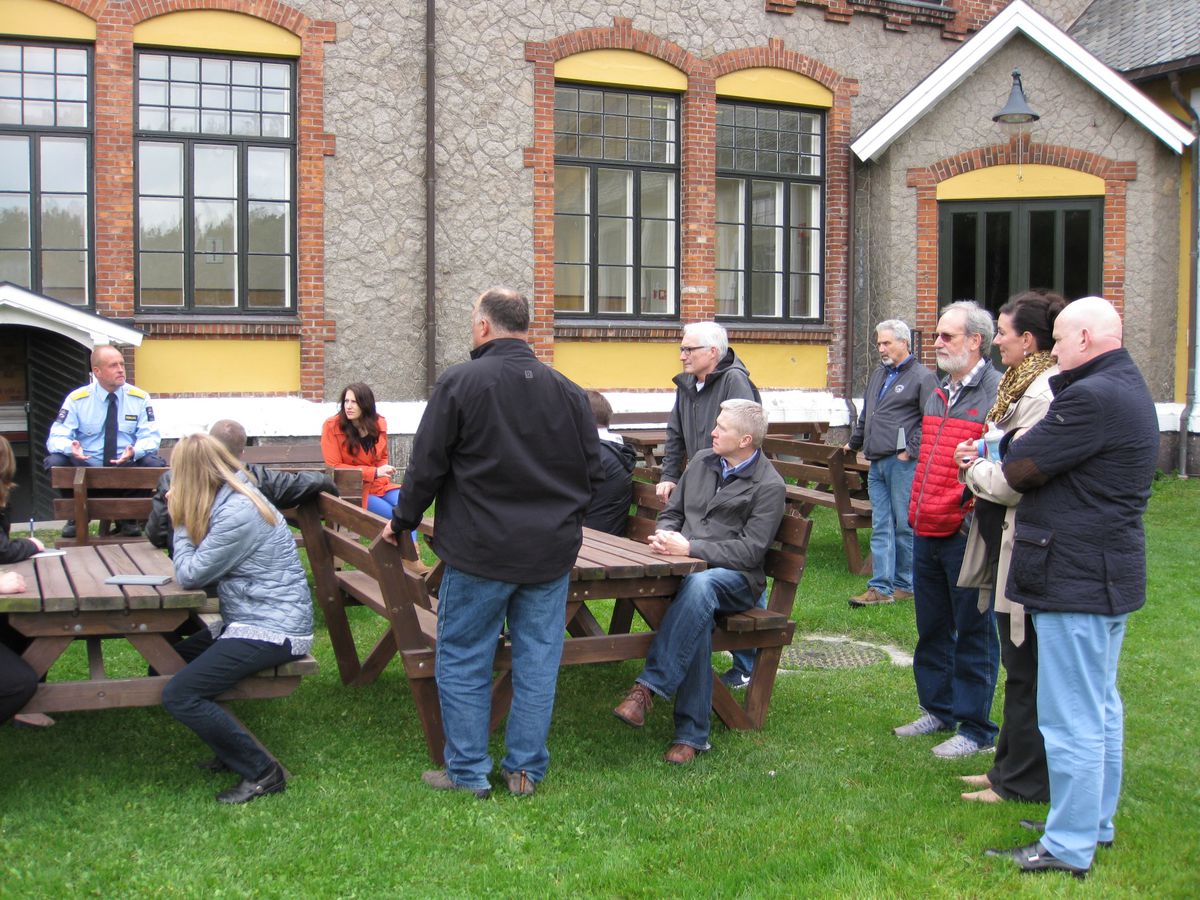 An Alaska delegation visited the Bastøy Prison in Norway at the end of September 2017. (Criminal Justice & Health Program at UCSF)

An Alaska delegation visited the Bastøy Prison in Norway at the end of September 2017. (Criminal Justice & Health Program at UCSF)

At the end of September, six Alaska state officials — including the two top ranking lawmakers and the head of the Alaska Department of Corrections — spent a week touring Norway's prisons to see if the country's "radically humane" approach to incarceration might hold lessons for Alaska's ongoing efforts to reform the criminal justice system.

The trip has raised eyebrows among critics who've asked what prisons like Halden — a maximum-security lockup in a forest abundant with wild blueberries where cells look more like Ikea-decorated dorm rooms than an American jail — could offer Alaska.

At a time when the state is wrapped in an intense debate about criminal justice reform and budgets are tight, Alaska Department of Corrections Commissioner Dean Williams acknowledged that such a trip might be a tough sell to the public.

No state funds were used to pay for the travel, he said.

"This is far from any sort of junket," he said. "I've been on junkets and this wasn't one of them."

Williams said he applied for Alaska to send a delegation on the trip to see "if there was something we were missing here" about how to run prisons in a way that doesn't routinely deposit most inmates back in cells within two years.

Williams made a pragmatic pitch for why Alaskans should care about what jails are like there: Norway, he said, has something figured out that we don't. The recidivism rate in the country is about 20 percent, compared to more than 60 percent here. Norway's system works, he said.

"It is not a radical liberal hug-a-thug approach," he said.

The delegation — Williams; House Speaker Bryce Edgmon, a Democrat from Dillingham; Senate President Pete Kelly, a Fairbanks Republican; Corrections director of institutions Bruce Busby; and two other officials from the department — found the experience a revelation, he said.

"All six of us came back and said 'yeah, we're missing something,' " Williams said. "It reset what you think is normal inside a prison system."

The trip was paid for by the Prison Law Office, a Berkeley, Calif.-based nonprofit law firm that sues for better conditions for prisoners.

Firm founder Donald Specter said he had grown frustrated with the limits of litigation to prompt prison reform.

After a trip to see European prisons with college students, "my jaw dropped. I said, 'holy mackerel, there's a way to imprison people and not be mean and abusive to them,' "  he said.

Specter decided to use the firm's proceeds from attorney fees on several major wins to influence the policy debate in a new way. In 2013, he started taking delegations of prison officials and lawmakers from U.S. states on all-expenses paid trips to see inside Norway's prisons, in hopes they would be inspired to change things at home.

So far, groups from Idaho, Pennsylvania, North Dakota, Colorado, Hawaii, Oregon and now Alaska have made the trip. Some of the states have made changes based on what they saw, like increasing prison industries or changing training practices to allow guards to act more casually with inmates. One system ended a ban on guards shaking hands with inmates.

Specter traveled to Alaska this summer to tour prisons around the state. He said he saw traditional, stark, overcrowded facilities and halfway houses with big problems, where people were crammed into facilities with little to do all day but make trouble.

He was impressed with Hiland Mountain Correctional Facility, the sole women's prison, with its views of mountains and trees and extensive activities for inmates, ranging from running club to orchestra. Wardens he met also seemed open to change.

In Norway, the group toured a different prison every day. One highlight was Halden, which received intense media attention when it opened due to its edgy art and furnishing that resemble a "boutique hotel" housing rapists and murderers, the U.K.'s Guardian newspaper wrote.

Williams said he was struck by the industriousness of Norwegian prisons. Every inmate has a daily job and purpose, and inmates cook some of their own meals and buy groceries with money they earn from working.

A plastic coffee cup in one prison emblazoned with the phrase "Just don't sit there" in Norwegian seemed to sum up the ethos, Williams said.

"Nobody sits idle," he said.

Relations between guards and inmates are also different. While correctional officers in Alaska spend most of their limited training time on security, Norwegian guards spend more time learning to interact with inmates and are free to have conversations, Williams said.

The goal is building normalcy within prison walls, so inmates become better adjusted neighbors when they get out — which all of them will because of Norway's sentencing structure, which caps a prison sentence at 21 years in almost all cases. About 95 percent of inmates in Alaska will eventually be released into the community.

Senate President Pete Kelly wrote in an email that Norway "may have the most successful prison system on the planet," pointing out the country's low recidivism rate.

But, "we're not Norway and we have huge challenges to change our system," he wrote.

The officials agree that Norway and Alaska are very different. The Scandinavian country, with 5 million residents, has a lower total prison population than Alaska. It also has a robust economy and a fundamentally different way of looking at its penal system, Specter said.

Norway's system diverges from Alaska in a few fundamental ways, Williams said. Sentences are much shorter, which is not something the state would emulate. Alaska's already-built facilities are made for security and confinement, not mimicking normal life.

Beyond that, there's a deep philosophical difference underpinning everything about the Norwegian system, Specter said: Norwegians don't expect or demand harsh conditions of imprisonment, because they see being isolated from family and deprived of freedom — the prisons still have locks and walls — as enough, he said.

"There's a different philosophy, which is that the loss of freedom is the punishment. And that's it."