After one of the Fairbanks Four brings wrongful conviction suit, the others file their own 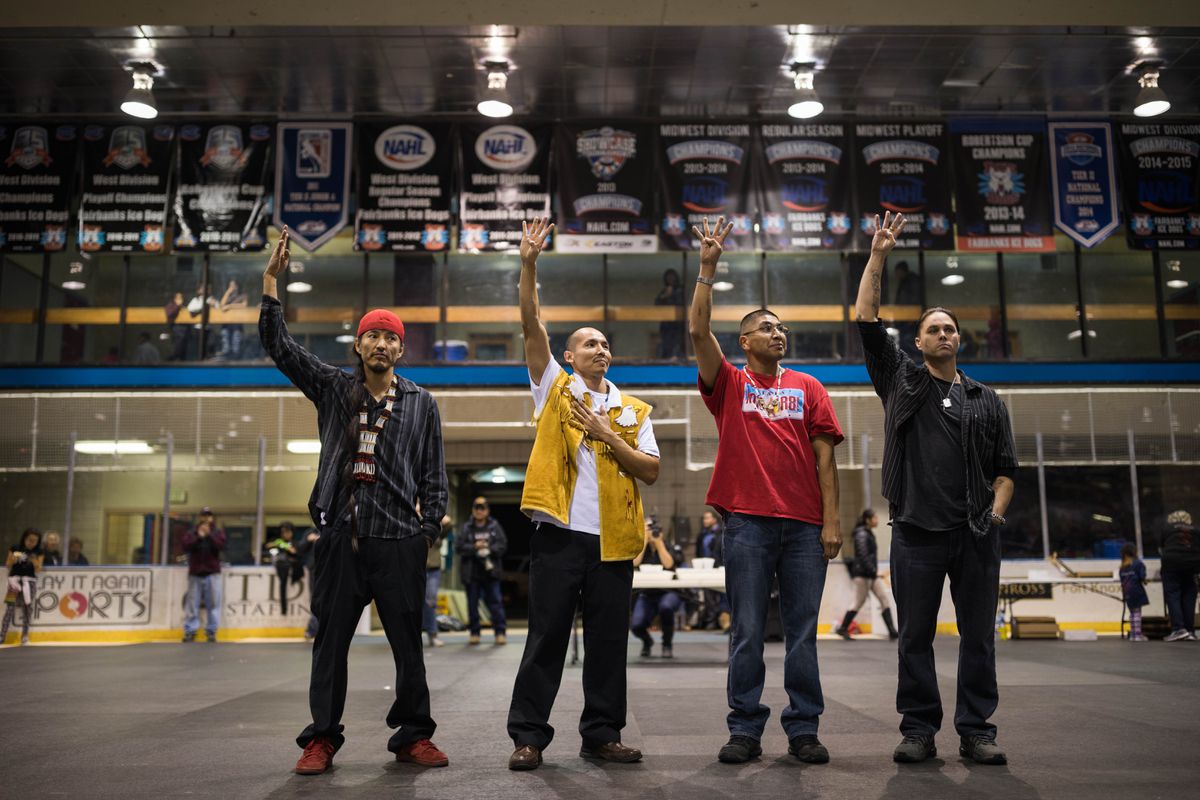 The Fairbanks Four, from left, George Frese, Marvin Roberts, Eugene Vent and Kevin Pease, raise four fingers, displaying the symbol of their struggle, during a potlatch held in their honor at the Big Dipper arena in Fairbanks on Oct. 19, 2016. (Loren Holmes / ADN)

The Fairbanks Four, from left, George Frese, Marvin Roberts, Eugene Vent and Kevin Pease, raise four fingers, displaying the symbol of their struggle, during a potlatch held in their honor at the Big Dipper arena in Fairbanks on Oct. 19, 2016. (Loren Holmes / ADN)

Call them the Fairbanks Three.

Eugene Vent, George Frese and Kevin Pease are suing the city of Fairbanks and two dozen of its police officers, less than two weeks after Marvin Roberts filed his own lawsuit.

The men make up the Fairbanks Four, a group of Alaska Native and Native American men convicted in the 1997 beating death of 15-year-old John Hartman, who was white.

Roberts was already out of prison two years ago when he and he three others signed a settlement with Fairbanks and the state. The four men, who say they were wrongly imprisoned for 18 years, agreed not to sue in exchange for having their murder convictions vacated; Vent, Frese and Pease were also released from prison.

Roberts, represented by Fairbanks attorney Michael Kramer, filed his lawsuit Dec. 7. Roberts' complaint says his settlement was "coerced" because — even though he was already out of prison — the state would only let the other three men go if Roberts also agreed not to sue.

Vent, Frese and Pease, who are representing themselves, filed their lawsuit Dec. 18. Their 24-page complaint includes many of the same passages as Roberts'; it says the state negotiated the Fairbanks Four settlements "for the purpose of preventing civil claims that it knew were valid."

"It is not good public policy to coerce a citizen to give up something valuable in exchange for vacating wrongful convictions and releasing innocent men," their complaint says.

The two lawsuits each ask for the settlements to be set aside, as well as for a jury trial and damages.

A spokeswoman for the city of Fairbanks, Teal Soden, couldn't immediately be reached for comment.

The Fairbanks Daily News-Miner reported Sunday that the city hasn't been served with Roberts' lawsuit.

Fairbanks' municipal attorney, Paul Ewers, told the newspaper he expects that the city will deny "many, many of the allegations" in Roberts' suit — particularly connected to an alternative explanation of the events that led to Hartman's death.