DA: Teens shot into a home, then into a party bus. Now they’re facing charges in a woman’s death. 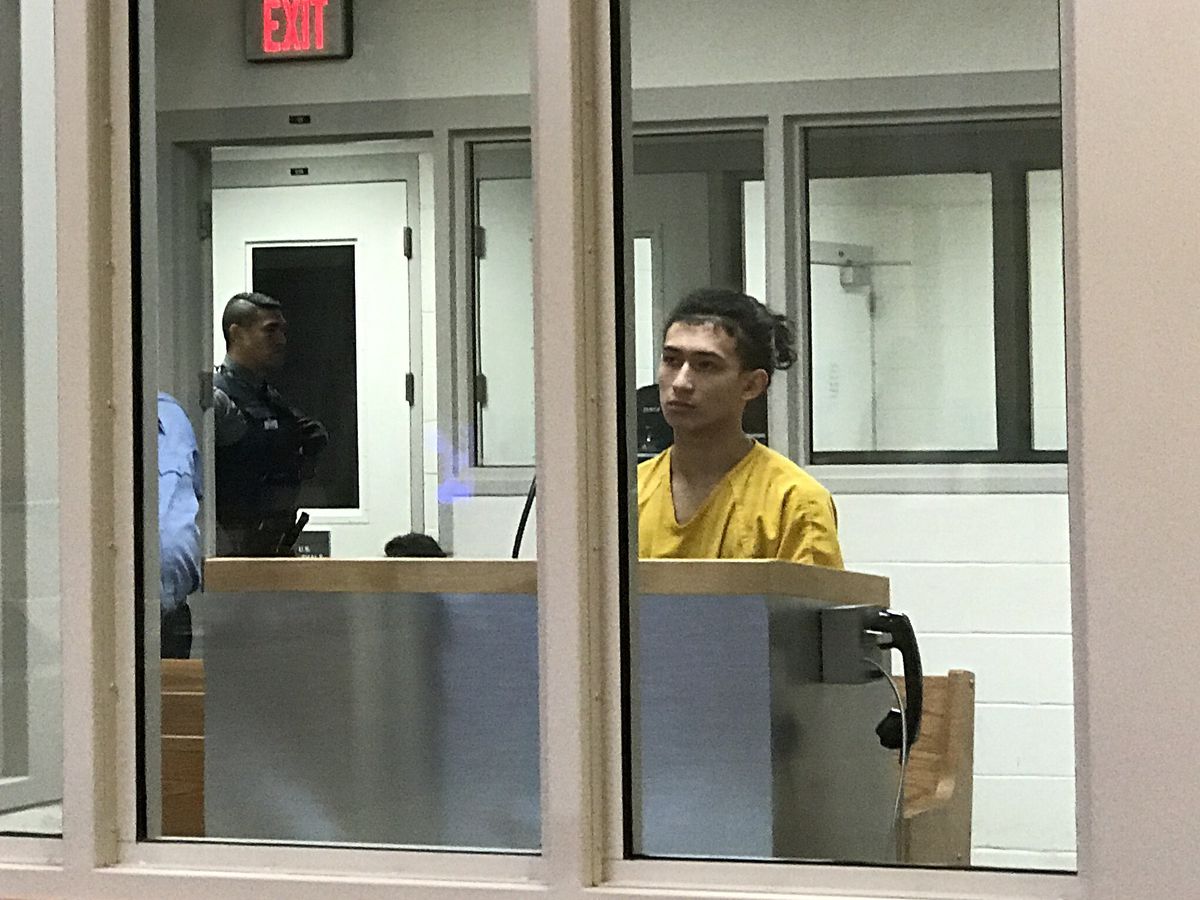 Christopher Wayne Espiritu-Simpson, 19, at Anchorage Jail Court on Sunday where he was arraigned on charges related to the shooting death of Juanita Lolesio, 19, on December 30. (Julia O’Malley/ADN)

Christopher Wayne Espiritu-Simpson, 19, at Anchorage Jail Court on Sunday where he was arraigned on charges related to the shooting death of Juanita Lolesio, 19, on December 30. (Julia O’Malley/ADN)

Two teenagers shot into an occupied triplex and, a few days later, into a rented party bus, striking a teenage woman in the head and killing her, according to a criminal complaint filed in state court over the weekend.

Christopher Wayne Espiritu-Simpson, 19, appeared in court at the Anchorage Correction Complex on Sunday, facing charges of second-degree murder, assault and misconduct involving a weapon related to the two incidents.

Investigators said that he and another teenager, who is a juvenile, shot into a house on Stella Place where people were sleeping in South Anchorage on Dec. 27 and at a rented Ford "party bus" full of people celebrating a birthday on Oklahoma Street in East Anchorage on Dec. 30. Juanita Lolesio, 19, who was riding in the bus, was shot and died later in the hospital.

Charges against the juvenile are still pending, said MJ Thim, spokesperson for the Anchorage Police Department.

"As far as who actually did the shooting, that's part of the investigation," Thim said.

The shooting was related to a "love triangle," Thim said. The two teenagers were acting on behalf of a friend who had a dispute with another man over a woman, he said. Lolesio wasn't connected to the dispute.

"The victim had nothing to do with it," Thim said. "She was just out with her friends."

Lolesio, who graduated from West High School in 2016, worked at Sephora, her parents said. She is the oldest of eight siblings between her divorced parents' two families, said her mother, Erica Lolesio.

"I had her young, she was my rock through a lot of ups and downs," Erica Lolesio said.

Juanita was in the bus with her boyfriend, close friends and her younger sister, Erica Lolesio said. They were dressed up to celebrate a birthday and were on their way home. Juanita's sister, who is still in high school, witnessed the shooting and rode with Lolesio to the hospital, Erica Lolesio said.

"She can hardly sleep, she dreams she smells the gun smoke, she sees everything like it's still there," her father, Juan Lolesio, said.

"It's an image you are never going to get out of your head," Erica Lolesio said.

Juanita Lolesio wanted to be a make-up artist from the time she was a little girl, her mother said. She also loved to dance, her father said. She was a football cheerleader for Bartlett High School.

[Anchorage set a disturbing homicide record in 2017. Why?]

"Man, that girl, very energetic, independent," Juan Lolesio said, forgetting to speak in past tense." She speaks her mind when she knows that something's not right, she's very outgoing, very lovable."

When Espiritu-Simpson and the juvenile shot at the triplex in December, their bullets struck a car and pierced the walls of a room where juveniles were sleeping, according to charging documents. Police were able to connect that shooting to the party bus shooting using bullet evidence and tracked Espiritu-Simpson's cell phone to both locations, the charges said.

Juanita Lolesio lived with her mother. Erica Lolesio said her daughter got dressed to go out the night she was shot and posed with her friends for photos in front of the Christmas tree.

"I gave them a kiss and told them to be safe," she said.

Erica Lolesio followed her daughter's evening through Snapchat posts, she said. On the way home, Juanita called to ask if she needed anything.

Minutes later, Juanita was in the bus's passenger seat when bullets pierced the doors and windows, court documents said.  One of them hit her in the back of the head.

Erica had just settled into bed when she got a call saying her daughter had been shot. She rushed to the emergency room.

"That's when I saw all the kids, they were in the E.R., covered in blood," she said. "They pulled me to the back and she was on the table. I just prayed."

On Jan. 15, her mother said, the family took her off life support. A memorial for her was held in Anchorage earlier this month and over the weekend in Texas, where her father lives. Mourners released balloons in her honor.

"She was a very good person," her mother said.