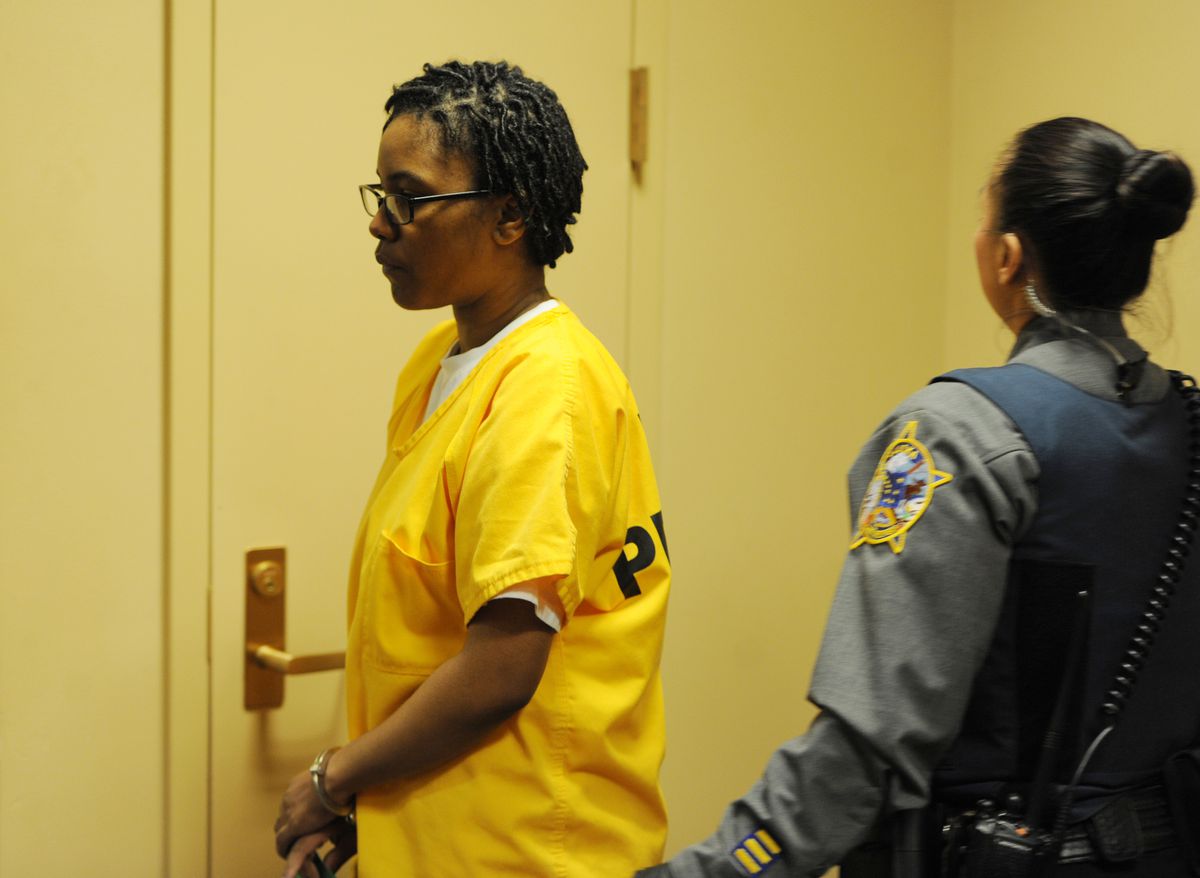 Ashley Ard walks into a courtroom at the Nesbett Courthouse on Wednesday. (Bill Roth/ ADN)

Ashley Ard walks into a courtroom at the Nesbett Courthouse on Wednesday. (Bill Roth/ ADN)

On Oct. 14, 2013, Ashley Ard gave birth to a baby girl in her bathtub. On Wednesday, she was sentenced to nine years in prison for the newborn's death.

Ard, who has been out on bail for several years, has since remarried, taking the last name Brown, according to court filings.

As Brown gave birth that night in October, her husband was at the airport picking up a relative. He didn't know that she was pregnant, according to Superior Court Judge Kevin Saxby, who outlined some facts of the case before announcing his sentence Wednesday.

The baby was not her husband's. Brown, then an Army specialist based at Joint Base Elmendorf-Richardson, had hid the pregnancy from nearly everyone, Saxby said.

Brown cleaned off the baby, wrapped her in a towel and got in her car. After briefly trying to nurse her daughter, Brown began driving around Eagle River.

She abandoned the child in Turner Park, under some bushes behind a transformer. When she returned home, she lied to her husband about the blood in the bathtub, Saxby said.

At Turner Park that night, a man heard the child crying but, unable to find the source of the noise, he gave up.

The next morning, the child was found dead by a dog walker.

On Wednesday, Brown was sentenced to nine years in prison with five years of supervised release. She will be eligible for parole in six years.

"I give the glory to God," her mother, Barbara Holland, said after the sentencing. "It could have been worse."

Brown has two daughters and is now 29 years old. Her husband was on active duty in the Middle East on Wednesday, her attorney Rex Butler told the court.

In July, Brown pleaded guilty to manslaughter. She faced a minimum sentence of five years and a maximum of 20 years.

Brown was initially charged with murder in the second degree. On Wednesday, Saxby said that her case qualified for the second-degree murder charge — which has a 20-year minimum prison sentence — so by pleading to manslaughter, her sentence was already substantially reduced.

Brown's case had two "aggravators" — details of a crime that allow a judge to impose sentences above normal ranges — that increased her possible maximum sentence.

Before her sentence, Brown addressed the judge. "I am not the same woman I once was," she said.

Brown apologized to family and friends and promised never to return as a defendant in court.

"I hope that you can see the transformation that God has done in me as well," Brown said.

In his ruling, Saxby found that Brown had acted with extreme indifference when she abandoned her daughter.

There were "literally dozens" of other places Brown could have left the baby. The child was not in an obvious location. Brown didn't make any attempts to help the child afterwards, Saxby said.

"Even in your mind you didn't want to acknowledge her existence," Saxby said.

Alaska's safe haven law allows for parents to give up a baby at a hospital, fire station or police station, no questions asked. But Brown had only just moved to the state in 2013 and was unaware of the law, Butler said. Butler said Brown did not want the child to die.

Testimony from family and friends painted a picture of a woman capable of change, Saxby said.

"If you're half the person your friends think you are, then you have some good prospects for rehabilitation," Saxby told her. "It is clear to me you've taken a number of positive steps in that direction."

Daisy Woko was one of four people to speak in support of Brown on Wednesday. Woko said she met Brown while Brown was out on bail through church.

"Within a short period of time I deduced this young lady has great potential," Woko said.

State prosecutor Jenna Gruenstein asked for a 15-year sentence. Gruenstein said that Brown had shown dishonesty and manipulation in her statements to mental health professionals, which could affect potential rehabilitation, Gruenstein said. The tragic case — the death of one of society's most vulnerable, a newborn — was entirely preventable, Gruenstein said.

Brown had gotten four different mental health evaluations which gave different opinions about her mental state. One doctor said she had persistent depression disorder and post-traumatic stress disorder, and didn't know what she was doing the night she abandoned her child. Another found that she had no psychological disorders but "maladaptive features."

Butler, Brown's attorney, asked for a sentence on the lower end of the range. "She really wasn't trying to hurt the baby," Butler said. "(Brown) had poor judgment."

"She'd like to get out in time to save her marriage," Butler said.

"It is possible to be a shining light in prison," Saxby said. "Your goals can be met."