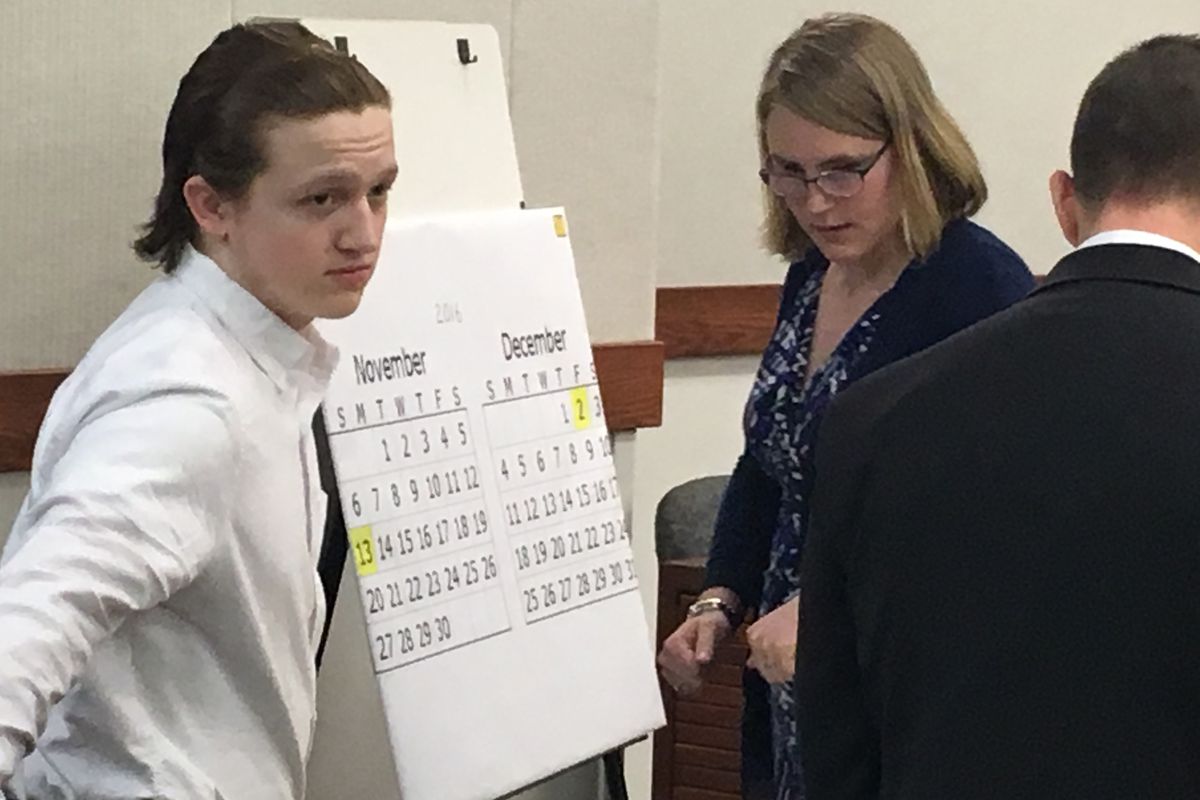 Erick Almandinger turns to leave the courtroom at the end of testimony in his murder trial Thursday in Palmer Superior Court. Almandinger and three other teens have been charged in the death of 16-year-old David Grunwald. (Zaz Hollander / ADN)

Erick Almandinger turns to leave the courtroom at the end of testimony in his murder trial Thursday in Palmer Superior Court. Almandinger and three other teens have been charged in the death of 16-year-old David Grunwald. (Zaz Hollander / ADN)

It was Dec. 2, two and a half weeks after the popular 16-year-old vanished. His 1995 Ford Bronco was found torched near the Talkeetna Mountains the next day.

The details of that day crystallized during testimony Thursday in Palmer Superior Court as the trial of 18-year-old Erick Almandinger — the first teen arrested in Grunwald's killing — continued into its second week.

Grunwald had dropped off a friend at Almandinger's earlier the evening of Nov. 13 and came back to drink and smoke marijuana, authorities say. He was savagely pistol-whipped in a camper behind the Palmer house and then driven to a remote spot near the Knik River where he was shot and killed.

Alaska State Troopers lured several of the teen suspects to Valley Hotel in Palmer that early December morning and then questioned them, Sgt. Tony Wegrzyn, the lead investigator in the case, testified this week.

Wegrzyn paid for Bradley Renfro, one of the suspects, to stay at the downtown hotel with his girlfriend after Palmer police reported them there at 2 a.m. trying to get a room, he testified Wednesday. The other teens later charged in connection with the killing showed up too: Dominic Johnson, Austin Barrett and Devin Peterson.

The investigator knew the teens would scatter if he told Renfro he wanted to talk to him the morning of Dec. 2, Wegrzyn testified. They did. Troopers were waiting to detain them.

That afternoon Johnson, accompanied by Wasilla attorney Jon Marc Petersen, helped investigators find Grunwald's body, frozen to the ground and covered in snow near a pullout along Knik River Road.

Armed with photos of the body and a new understanding of the crime, Wegrzyn brought in Almandinger. He'd interviewed him three times before with little success.

Starting around 6 p.m., Wegrzyn spent more than three hours in a small interrogation room at the Palmer post, grilling Almandinger as his grandmother and divorced parents urged him to come clean.

Wegrzyn showed the family photos of the trailer behind the Almandinger home where Grunwald was pistol-whipped so violently the silhouette of his body left a blank space in a pool of blood, according to video of the interrogation shown in court Thursday.

Sitting close in the small room at the post that early December night, Wegrzyn told Almandinger his friends had already talked. He showed Almandinger a photo of Grunwald's body.

Almandinger, until then argumentative and defiant, broke down and asked for a garbage can to throw up in.

Then, with grandmother Myler Almandinger holding his hand across the table and after his father, Rodney, could be heard sobbing loudly outside the door, Almandinger started to talk.

"To do what?" his grandmother asked.

"To beat the s— out of David," Almandinger said.

"Because he was sitting out there … he sat there and smoked all my weed and Dominic didn't like it," he said. Johnson "just didn't like" Grunwald.

Almandinger said Johnson — described as 6 feet, 3 inches and 250 pounds — asked in Facebook messages that he bring his heavy Ruger .40-caliber pistol out to the camper.

He said he initially refused but then brought it out, opened the door a crack, handed Johnson the gun, and closed the door because he didn't want to be part of what was going to happen. Within a few minutes, however, Almandinger said, he went inside.

The teens locked Grunwald in the bathroom, then beat him after they turned off all the lights and let him out, he said. Grunwald initially thought it was a joke.

Johnson hit him once, and Grunwald started begging him to stop, Almandinger told the investigator. Barrett hit him once "and then Dom, he just kept going."

The teens loaded Grunwald into the Bronco, Almandinger said. They couldn't find the key. Grunwald, bleeding heavily, had to show them the right one.

They drove to Butte, looking for a secluded spot to execute Grunwald because "he knows too much," he said, repeating what he said the others said.

Grunwald was unconscious at times but at the end "he was kind of coming back to reality" and pleading to be dropped at his girlfriend's father's house in Butte. The others told him they were taking him to "Nurse Joyce" to get fixed up, Almandinger said.

As Almandinger on the video began describing the shooting, Grunwald's parents Ben and Edie left the courtroom.

All four teens walked Grunwald out of the Bronco from Knik River Road in the dark, Almandinger said.

He first said Johnson was the one who fired the shot and then said it was Barrett, a contention disputed by the others in various accounts provided to investigators.

"I just remember his legs giving out and his head falling backwards … he just dropped," Almandinger said.

Prosecutors acknowledge no evidence directly links anyone to the shooting. Grunwald was shot with a 9 mm pistol, prosecutors say. That was Barrett's gun.

Both guns were stolen, according to testimony this week. The same Fairbanks teenager supplied them to Almandinger and Barrett.

The four teens drove to Peterson's house near Big Lake and asked for advice, Almandinger said. Peterson, who gave them gas cans and took the guns they used, is scheduled to be sentenced in August in a plea deal.

All but Barrett and Peterson drove the Bronco to a trail past Schrock Road and set it on fire, Almandinger said. They drank and smoked marijuana from a makeshift can pipe as they walked away and waited for a taxi.

Back at his house, Almandinger said he made pizza pockets and chimichangas while some of the others cleaned up the trailer. He spent the next several days in a shed nearby with the others.

['That was the last time': David Grunwald's final moments play out in social media messages]