Suspect in shooting outside Anchorage school had just dropped off a student, police say 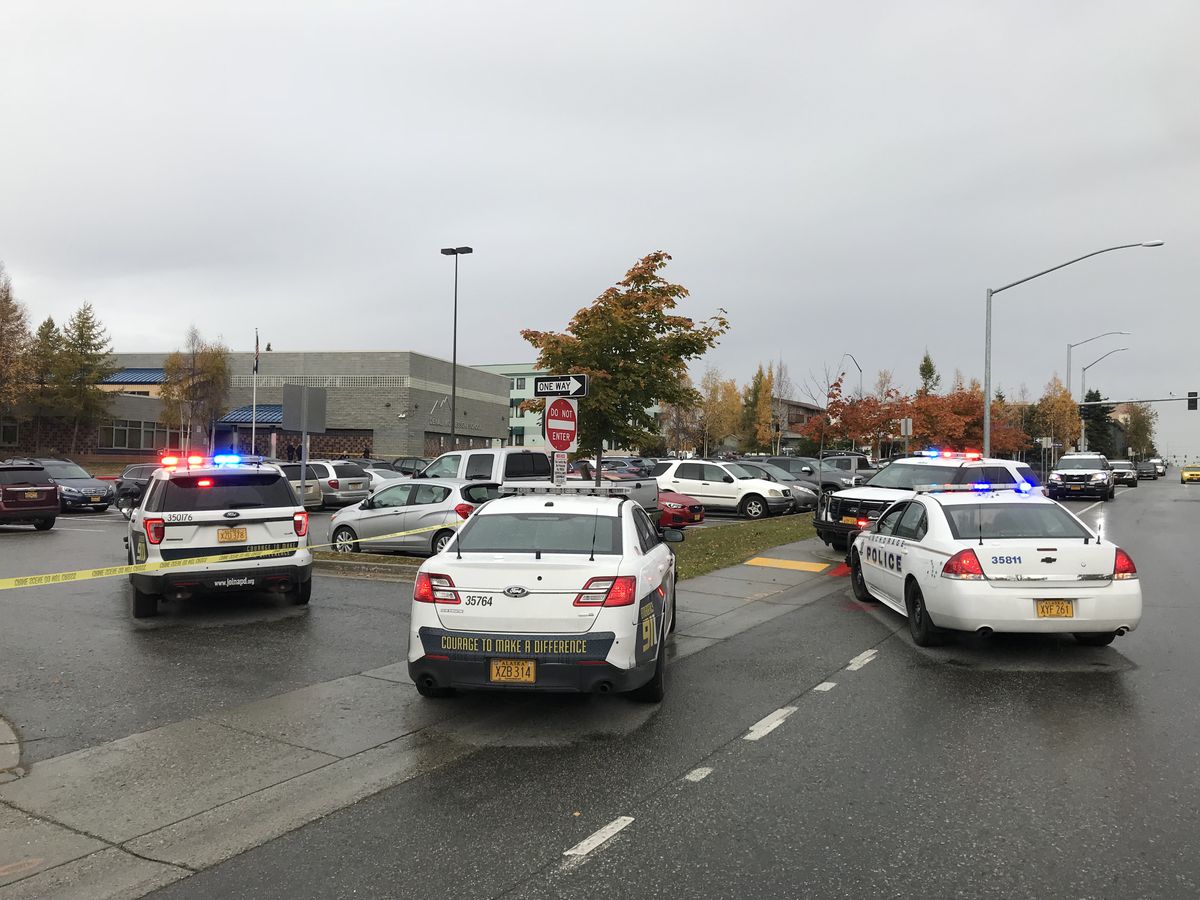 A shooting Wednesday morning in the parking lot of an elementary school near downtown Anchorage left one man in jail, one man wounded and hundreds of students in a lockdown.

Police say 26-year-old Laquinton Robbins dropped a student off at Denali Montessori Elementary School and walked back to his vehicle in the school's parking lot, where he got into an "altercation" with a man. Robbins shot the man once in the upper body and ran, police said.

Police were notified about the shooting around 9:30 a.m. and officers arrived within minutes, said Anchorage Police Chief Justin Doll. Police found the victim near the school's front doors and also found Robbins in the area.

"When situations like this happen, it's all hands on deck and we just flood the area with officers," said MJ Thim, police spokesman. "The suspect really had no place to run. We caught him really quickly."

The shooting happened about 30 minutes after school started at Denali Montessori, a public school near Cordova Street and East Ninth Avenue. Students and staff went into lockdown. As police responded and investigated, parents learned about the shooting through cellphone alerts or text messages from their children.

"I texted him that there was a lockdown at school and I was really scared and I wanted him to pick me up," said fifth-grader Audrey Pittsenbargar, describing a message to her dad.

Police said the shooting was confined to the parking lot.

The man shot was able to speak with officers, Doll said. He was taken to the hospital with life-threatening injuries, Thim said. No one else was injured in the shooting.

Police haven't identified the man shot. Thim said the man and Robbins knew each other, but declined to go into further details. He described the shooting as a "domestic dispute."

Robbins was questioned by detectives Wednesday and taken to jail. He faces charges of first-degree assault and fourth-degree misconduct involving a weapon, police said.

Police vehicles remained parked around the school building late Wednesday morning. Crime scene tape surrounded parts of the parking lot. Some parents decided to pick up their children from school. They walked together out of one of the building's side doors.

Brian Pittsenbargar picked up his two children, Audrey and Dylan. Both had sent him text messages about the shooting. Dylan, a sixth-grader, told his dad in the messages that he was in a lockdown and there were a lot of police.

"I don't like it right now please come get me," Dylan wrote.

Pittsenbargar said he called the school and picked up his children.

Jennifer Hazen has two children at Denali Montessori, ages 7 and 9, and she's the president of the Parent Teacher Student Association. After a workout class Wednesday morning, she checked her phone and had nearly 50 text messages, she said. That's how she learned about the shooting.

"I was just immediately sobbing because I feel like we're all nervous in this country that we're next," Hazen said while crying outside the school. "It's just really close to home."

Hazen went to the school Wednesday to help answer calls coming into the office. She also checked on her children. Her 7-year-old told her she hid under a table when the school went into lockdown.

The Denali Montessori principal sent an email and text message to parents soon after the shooting to inform them about what happened, Esary said. Police sent out an alert too.

Anchorage schools Superintendent Deena Bishop also issued a statement. Bishop wrote that she regrettably needed to notify the community about the shooting. Students and staff were safe inside the school and the suspect was in custody.

"We appreciate the work of APD, our school administrators, and staff to keep our children safe," Bishop wrote.

About 430 students in kindergarten through sixth grade attend Denali Montessori.