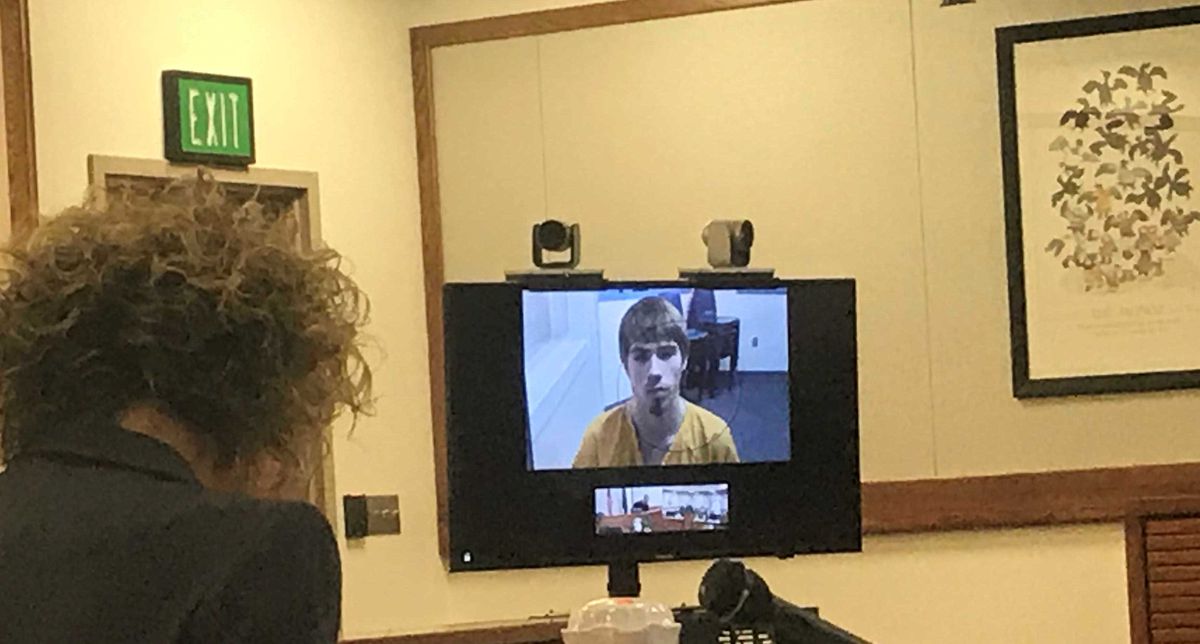 PALMER — A 19-year-old from Wasilla is accused of killing his friend early Sunday morning as they sat in a Jeep, then running from the scene only to be caught an hour later.

Jordan Flowers put his face in his hands as a judge set his bail at $100,000 cash-corporate for manslaughter and assault charges on Monday afternoon. Flowers participated in the arraignment hearing via closed-circuit television from Mat-Su Pretrial Facility.

Flowers is accused of shooting 19-year-old Gunnar Swan in the neck with a semi-automatic Glock and fleeing until Alaska State Troopers found him an hour later, cold and wet and about to get a ride from his father, court documents show.

Allen told Palmer magistrate judge Craig Condie that the high bail amount reflected the fact that the family “would like to see the defendant remain in jail.”

He also said that, given additional information that’s come in since charges were filed, it’s “very, very likely” that Flowers will be charged with murder instead of manslaughter.

Several people attended the hearing on behalf of Flowers. They declined to comment afterward.

A friend in the Jeep with Swan and Flowers told investigators he called 911 around 2:30 a.m. Sunday after the shooting, according to a sworn affidavit filed with the charges by Alaska State Troopers Sgt. Tony Wegrzyn. The friend said he did CPR on Swan but Flowers and three others in the car fled.

The friend, 18-year-old Allen Hodgson, told troopers that Flowers — a friend of Swan and Hodgson’s — shot Swan as he sat in the driver’s seat of his 2014 Jeep Patriot SUV. Hodgson sat in the passenger seat.

The three teens in the back of the Jeep showed up at the Wasilla police station within an hour of the shooting, according to the affidavit: Kyler Ince, 18; Nathaniel Hale, 19; and an unidentified 17-year-old.

All three told investigators that Jordan “produced a semi-automatic handgun from his waistband, pointed it at Gunnar’s neck in the space between the headrest and seat back, and then he fired the handgun,” Wegrzyn wrote. They said they ran because they were afraid Flowers would shoot them, too.

Hodgson, who said he didn’t know the three teens, told troopers that Flowers returned a short time after the shooting still holding the pistol, which Hodgson said he retrieved and secured before troopers arrived, the affidavit said. Then, he said, Flowers left again.

At 3:45 a.m. Sunday, patrol troopers found Flowers as his father was about to pick him up, about a mile from the scene of the shooting on Angel Drive in Wasilla, the document said. He displayed signs of drunkenness.

A message to a number Flowers gave as his father’s was not immediately returned Monday.

Flowers, during an interview at the Palmer troopers post, told Wegrzyn he couldn’t remember details of the shooting and blacked out for a second after the gun went off, according to the affidavit. Flowers said he’d known Swan for a few years and got a ride to his Big Lake house earlier that night. After drinking three or four beers, he left there with Swan and Hodgson and ended up at the Wasilla address.

He said the witnesses were involved in a conspiracy and trying to blame him.