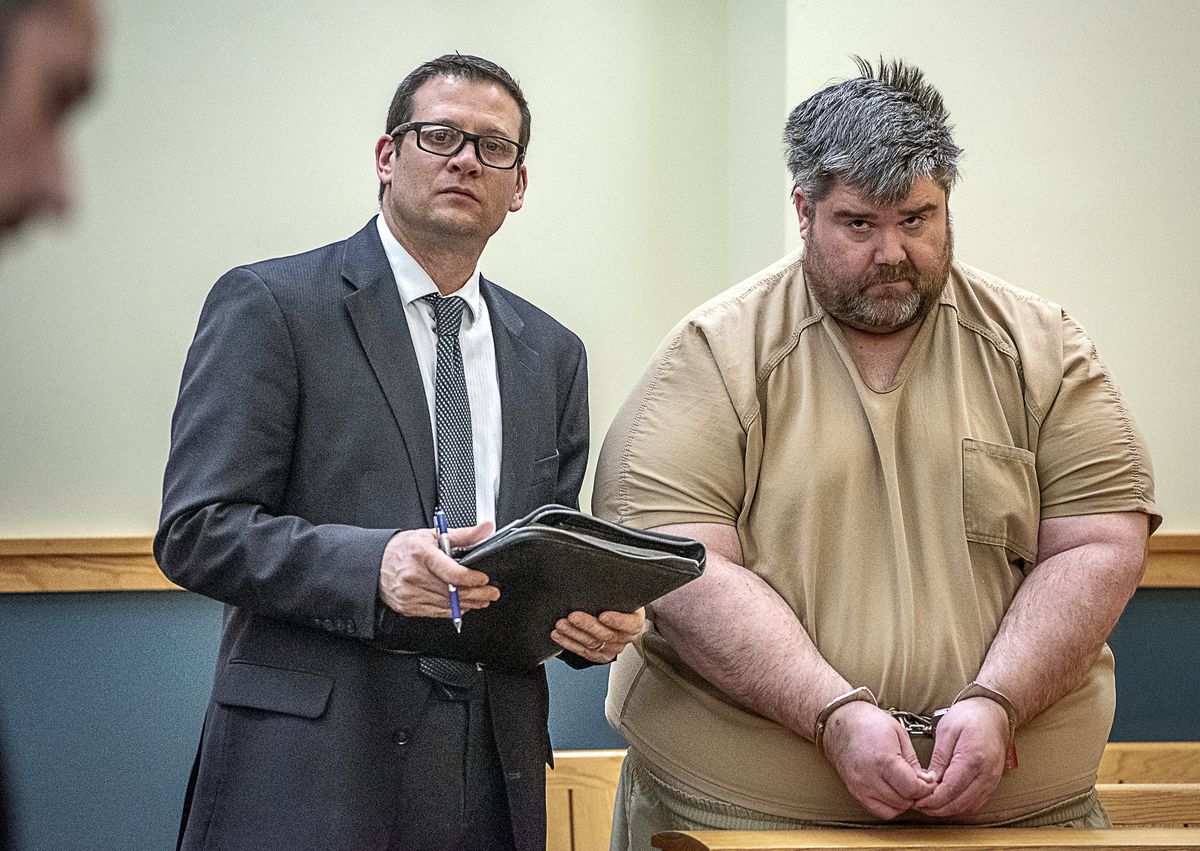 Steven Downs, 44, of Auburn, Maine, right, stands for his initial appearance in 8th District Court in Lewiston, Maine, on Tuesday, Feb. 19, 2019. Downs has been charged with the 1993 rape and murder of 20-year-old Sophie Sergie at the University of Alaska Fairbanks. Standing with Downs is Attorney Richard Charest. (Andree Kehn/Sun Journal via AP)

Steven Downs, 44, of Auburn, Maine, right, stands for his initial appearance in 8th District Court in Lewiston, Maine, on Tuesday, Feb. 19, 2019. Downs has been charged with the 1993 rape and murder of 20-year-old Sophie Sergie at the University of Alaska Fairbanks. Standing with Downs is Attorney Richard Charest. (Andree Kehn/Sun Journal via AP)

Multiple women who had worked with the man charged last week in a 25-year-old Fairbanks killing say he made them uncomfortable on the job, causing him to be fired from at least one workplace.

Steven H. Downs, a 44-year-old nurse living in Auburn, Maine, was charged with murder and sexual assault last Friday in the killing of Sophie Sergie, who was stabbed and shot before her body was found in a bathtub at the University of Alaska Fairbanks in 1993.

Nearly three years before his arrest, in 2016, he was fired from his position at the Harris House, a 12-bed intermediate care facility, for “a totality of substandard performance," according to records from the Maine state Board of Nursing.

The Harris House, which is in Livermore Falls, Maine, complained to the nursing board that Downs had made comments to at least two female co-workers while he was working there that had made the women uncomfortable.

Downs apologized to the first woman who complained, saying that “it was not his intent" to make her uncomfortable, according to the board’s records. A second woman made a similar complaint two months later, but Downs argued that his behavior had not been inappropriate.

Kelly Ellingwood, who worked under Downs as a certified nursing assistant at the Harris House, said he would sometimes "hit on” one of the younger CNAs at the facility, though she didn’t remember any specific comments he had made.

“I always felt uncomfortable having to go to him for things and being around him,” Ellingwood said in an email.

Downs would also make mistakes in the course of his job, Ellingwood said, like accidentally spilling water on a resident’s sheets without cleaning up the mess.

The Harris House also noted that Downs mishandled medication on more than one occasion, documenting doses he hadn’t yet given, pouring medications into unlabeled cups and and giving a pill to one patient too early, according to the state nursing board’s records.

Downs signed a consent agreement in March 2017 certifying that he had completed a course called “Professional Boundaries in Nursing" in exchange for a warning from the nursing board.

Messages left for North Country Associates, the company that owns the Harris House, were not returned.

At least two women who had worked at a different residential care facility, the Marshwood Center in Lewiston, Maine, said Downs had worked there as well. A spokeswoman for Genesis HealthCare, the company that owns the facility, would not confirm whether Downs had been an employee, saying the company “does not comment on employment status.”

Jaime Mathers, who worked at the Marshwood Center as a CNA, said she had seen Downs mistreat at least one resident in April 2018, hurting her and making condescending comments while he was treating her wound.

That resident said she was afraid to report Downs’ behavior because “she didn’t think anyone would listen,” according to an an incident report Mathers filed.

Another resident asked Mathers that same month to be in the room when Downs was treating her because she was “scared of him and felt he would hurt her or give her medicine she doesn’t need,” Mathers said. The same resident confided in Mathers that Downs had told her “no one will believe you over me," she said.

“I believe it is also important to mention I have never heard or seen him treat males these ways,” Mathers said in an email. “Only females he feels he has power over.”

Misha Smith, who was formerly a member of the Marshwood Center’s kitchen staff, said she had worked with Downs between 2017 and 2018. He was often “rude” to co-workers and to family members of patients, she said.

“I didn’t even like being in the same room as him because I felt weird being around him,” Smith said in an email.

A Facebook comment thread on an article published in the Lewiston, Maine Sun Journal is filled with similar stories.

Downs was first licensed as a registered nurse in July 2011, according to state nursing board records from Maine. His nursing license is still active, though his attorney said at his extradition hearing Tuesday that he isn’t currently working.

Downs, who was born in Auburn, Maine, was a student at the University of Alaska Fairbanks between 1992 and 1996. He had lived in the same dormitory building where Sergie’s body was found, according to his charges.

Investigators linked him to the killing using genetic information his aunt had entered into a public genealogical database. A direct DNA sample taken from Downs matched DNA evidence recovered from Sergie’s body.

Downs, who is being held at the Androscoggin County Jail in Maine, contested his extradition to Alaska at his first court appearance Tuesday. His lawyer had said that “there must be some kind of mistake.”