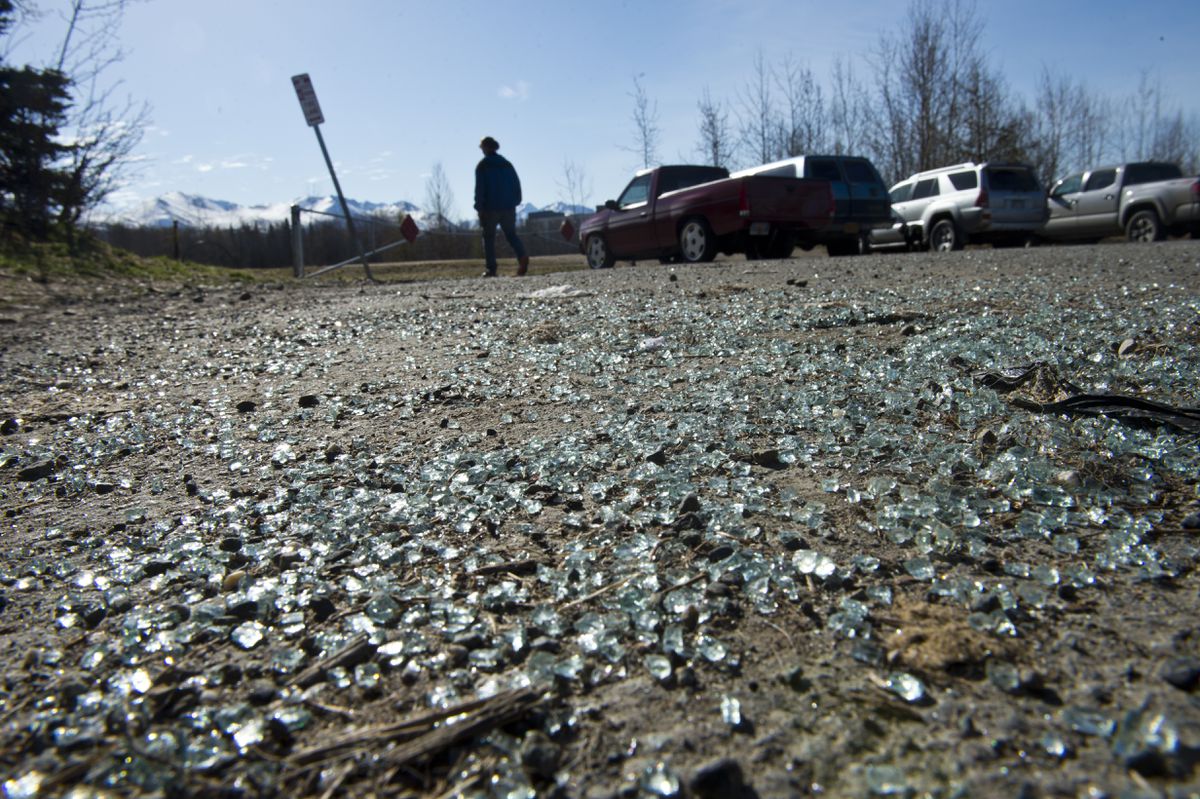 Broken glass on the ground in a parking area at University Lake on May 1, 2019. (Marc Lester / ADN)

Broken glass on the ground in a parking area at University Lake on May 1, 2019. (Marc Lester / ADN)

Serena Kraft was gone from the University Lake parking lot for only 20 minutes.

When she returned from walking her dog Saturday, her car window had been shattered, her credit cards were missing, and several charges — which, by the time she managed to cancel the cards, totaled more than $3,500 — had been made to her account.

It was the second time in less than two months that Kraft, who lives on the Hillside, had been the victim what police call a “smash and grab."

“It makes me want to take it into my own hands,” she said Thursday, echoing the feelings of a growing number of recreators who say they’re fed up with car break-ins on the trail system in and around Anchorage.

“It is a problem,” Oistad said. “There are a high number of break-ins at trailheads.”

In Chugach State Park, the numbers are even shakier. Park users who have their cars broken into often don’t report the theft to the state parks division, Chief Ranger Ben Corwin said, and often, the only indication rangers have that a break-in even happened is a telltale pile of broken glass on the ground.

A community crime map publicly available online offers some of the only data on the issue. The map shows that between April and September 2018, when hikers and bikers were more likely to be using the trails, there were at least 16 thefts reported near the Prospect Heights trailhead, 16 near Kincaid Park, 10 near Thunderbird Falls in Eklutna, and additional handfuls scattered across the trail system.

Between October 2018 and March 2019, during the fall and winter recreation seasons, things seemed to slow a bit. Prospect Heights saw at least seven thefts, while Kincaid saw at least six and Thunderbird Falls had four.

[Protecting your property – and yourself – in Southcentral Alaska: Troopers and police share their tips]

Anchorage trailhead lots don’t have consistent security monitoring, which can make them easy targets for thieves. Concealed trailheads with heavy tree cover that makes it easier for thieves to avoid being seen, as well as popular trailheads that offer more potential victims, are especially vulnerable, Oistad said.

Only a few lots, like the Kincaid Park Chalet parking lot, have surveillance cameras. A handful of crime-heavy parks have limited security measures as well, like gates that can be locked at night, according to Anchorage Parks Superintendent Josh Durand.

“A bigger long-term approach that we’ll be working towards as technology improves, as infrastructure allows, is to provide video surveillance in the parks,” Durand said.

For now, though, vehicle break-ins remain difficult to investigate, and thieves are very often successful, according to Oistad.

“If there’s no suspect information, if no one sees it, there’s no evidence left behind,” she said.

That means the burden of protection most often falls to trail users. The standard advice, according to officials, is not to leave anything in your car that could entice thieves — don’t leave valuables out in the open, or better yet, don’t have them in your car at all.

Hiker Michael Vance said he did everything right when his car was broken into last year. He doesn’t keep anything in his car that he can’t take with him when he leaves, but even so, he still had to shell out $500 for his broken window, he said.

“It’s sad that it’s being done, because for a lot of us outside, the physical aspect — well, it’s peaceful, it’s relaxing, and you kind of get that taken away from you,” he said.

Vance, who works as a security guard, spent the past week sitting at trailheads around Anchorage, keeping watch over other hikers’ cars.

He said he doesn’t plan to interfere if he sees any suspicious activity — though he may record or take pictures before reporting the incident to police — but said he hopes his presence will help other recreators feel more secure.

“Somebody just being there is a natural deterrent anyway,” he said.

On Wednesday, Vance parked at the Campbell Airstrip trailhead in Far North Bicentennial Park and propped up a white board on an overturned milk crate. On it, he had written “Mat Su to Anchorage Trailhead Crime Watch" in the hopes that highlighting the name of the Facebook group for crime-weary hikers might spark questions from passersby — and deter thieves.

The Facebook group, barely a month old, is filled with pictures of shattered car windows, stolen property and vehicles that the group’s members thought looked suspicious.

The group was originally intended to build vigilance against trail crime, group administrator Nicole Smith said, but some of its 1,100 members, like Vance, have begun using it as a platform to organize watches.

“Something is going to morph out of this, and it’s going to be grassroots,” Smith said.

Smith, who works as a house cleaner in Palmer, said she used to hike at Lazy Mountain almost every day before the theft at that trailhead became severe enough to make her give up the hobby altogether. She’d been hiking for eight years.

She started again only recently, she said, after a group of hikers in the Valley began volunteering to take their own trailhead-watching shifts on the weekends. She wouldn’t reveal when or where the shifts were scheduled, so as not to tip off thieves.

A similar, city-sanctioned group also exists in Anchorage. Hundreds of people are listed as volunteers in the Parks and Recreation Department’s Trail Watch database, Anchorage natural resources manager Brad Muir said. (That list goes all the way back to 2003, though, when the program started.)

After watching a brief training video and receiving their city-issued vest or armband, volunteer trail watchers are free to patrol the trail system as their schedule allows, Muir said. They report criminal activity to police and report other issues, like trail maintenance needs or homeless camps, to the city.

The one thing they don’t do, Muir said, is interfere.

“It’s basically to be another set of eyes and ears on the trail," Muir said. "It’s not to interject; it’s not to enforce any laws.”

It’s hard to say how many of those hundreds of volunteers are still active, but Muir said 125 people signed up in 2017, the year after two people — whom police later discovered had been murdered by a serial killer — were found dead on the Chester Creek Trail in Valley of the Moon Park. Volunteer numbers dropped off after that year, he said.

As far as what police are doing to combat trail crime, Oistad wouldn’t say.

“It won’t work if people know what we’re doing,” she wrote in an email, though she did mention that some of the police department’s school resource officers, who don’t need to be at their usual posts during the summer, patrol the trail systems on bikes during that break period.

Development also seems to help, officials said. Durand, from the city Parks Department, pointed to playground renovations at Campbell Creek Park in East Anchorage and Balto Seppala Park in Turnagain as examples of projects he said halted “nefarious activity” in those areas.

And Ben Corwin, chief ranger at Chugach State Park, claimed that the Basher trailhead in East Anchorage saw a dramatic drop in vehicle break-ins when a brush-clearing project there made the trailhead more open and visible.

But for residents who use the trails — like Serena Kraft, who said she found four more piles of broken glass at the Hilltop Ski Area this week — the question of whether that’s enough still remains.

“The message is, you can do whatever you want here because you will not get in trouble,” she said.