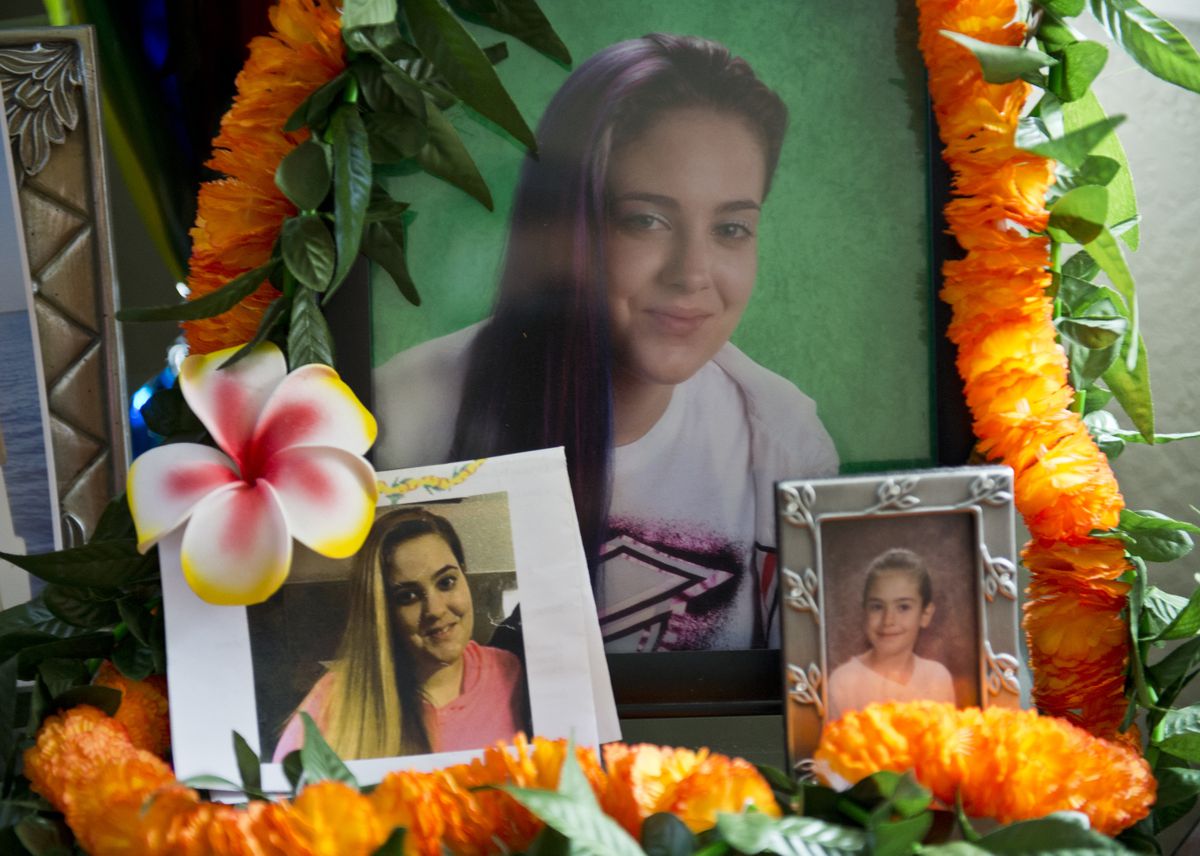 Photographs of Brittany-Mae Haag are displayed in her mother's Eagle River home. Haag died in April 2017 when she was struck by a bullet during her boyfriend's failed suicide attempt. Photographed August 2, 2017. (Marc Lester / ADN)

Photographs of Brittany-Mae Haag are displayed in her mother's Eagle River home. Haag died in April 2017 when she was struck by a bullet during her boyfriend's failed suicide attempt. Photographed August 2, 2017. (Marc Lester / ADN)

A man who pleaded guilty last year to accidentally shooting his girlfriend during a suicide attempt was sentenced to 9 years in prison Wednesday.

Victor Sibson, then 21, was originally charged with second-degree murder in the 2017 death of his girlfriend, Brittany-Mae Haag, 22. Prosecutors said a single bullet Sibson fired into his own head hit his girlfriend in the chest, killing her.

A November plea agreement downgraded Sibson’s murder charge to manslaughter, which carries a maximum 20-year prison sentence. In that plea agreement, prosecutors and the defense suggested a sentence of 14 years with five years suspended, for a total of nine years to serve. Superior Court Judge Erin Marston ruled in line with the agreement.

“This is such an unusual event that it’s hard to imagine it ever happening again," Marston said at the sentencing hearing Wednesday. "However, I do think that until such time as he’s been treated for the mental illness that he does pose a danger to the public.”

Prosecutors said Haag was trying to stop Sibson from killing himself with a handgun early on April 19, 2017 when Sibson shot himself in the head. The bullet passed through Sibson’s skull and exited out the other side, striking Haag below her left armpit and hitting several major organs and blood vessels, prosecutors said.

A wounded Haag ran to a neighboring apartment yelling, “He shot himself, and I’m shot too,” according to Sibson’s plea agreement, before returning to her own apartment with a neighbor in tow. She then lay down on the floor by Sibson and died before emergency responded arrived, the agreement says.

Sibson, who had been critically injured, was treated at the hospital and recovered.

At his sentencing hearing on Wednesday, Haag’s mother, Sheila Lopez, asked Assistant District Attorney James Fayette to read a statement on her behalf. In it, she alluded to what she perceived as a lack of empathy on Sibson’s part after her daughter’s death.

“I would like people to know that when Victor was released from the hospital, his concerns were ‘where is my bike and Nintendo?’” Lopez had written.

When Sibson was given the opportunity to address the court, he apologized to Haag’s family, who filled the first row of the gallery wearing black T-shirts with pictures of Haag’s face printed on them.

“I still haven’t been able to forgive myself, and I don’t know when I will be able to,” he said.

The justice system will give Sibson, now 23, credit for the two years he’s already spent in jail, meaning he will effectively serve seven years, according to Fayette. He won’t be eligible for parole until the end of that time, Fayette said.