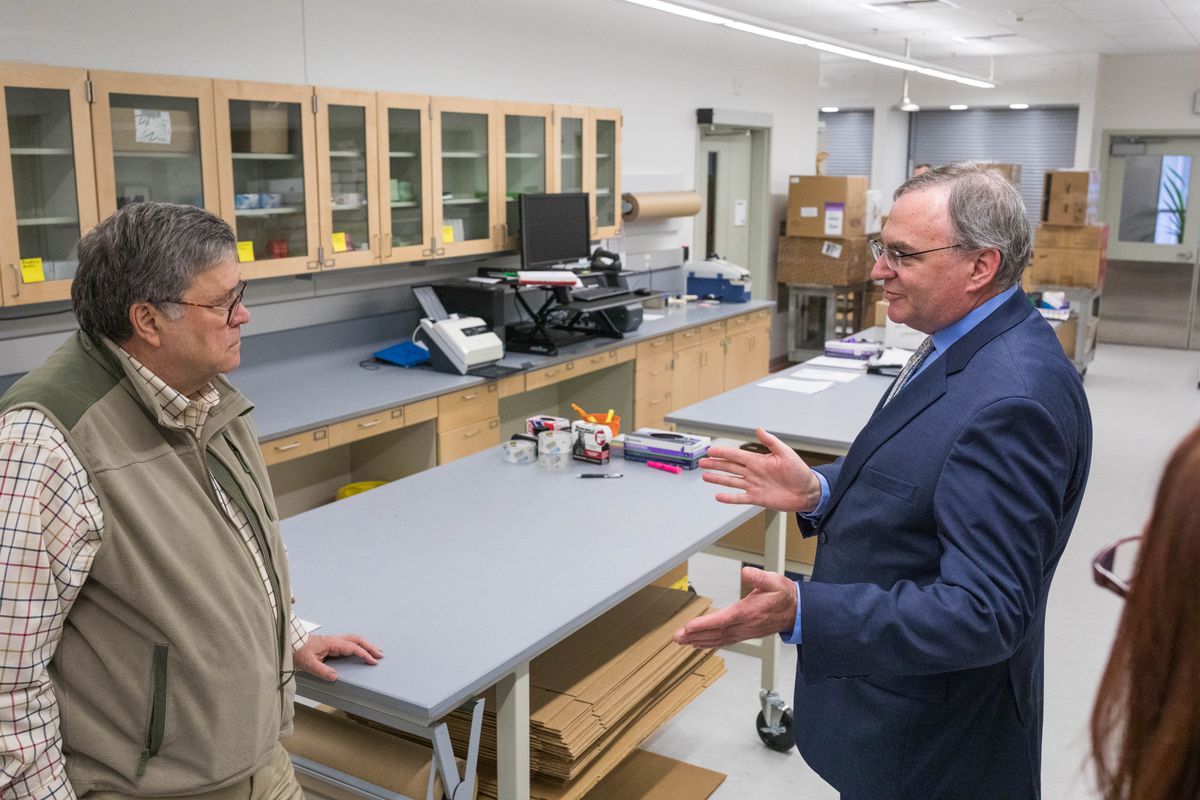 On his way to tour the indoor shooting range at the Alaska state crime lab in Anchorage on Thursday, U.S. Attorney General William P. Barr walked through a sterile room stacked with rape kits. Anchorage police send 25 kits — textbook-sized collections of notes and DNA samples from victims of sexual assaults for use as evidence in criminal cases — here each week for testing, lab chief Orin Dym told him. Other evidence boxes are decades old.

In a state with a sexual assault rate that is the highest in the nation and rising, Barr is nearing the end of a four-day visit to Anchorage, Bethel and two rural villages at the invitation of U.S. Sens. Lisa Murkowski and Dan Sullivan. The goal: Introduce the chief law enforcement officer of the federal government to the unique problems of Alaska, up close and as described by survivors, Alaska Native leaders and frontline first-responders.

Barr said he was struck by the sense of urgency and the “range of ideas” he heard in a roundtable talk with Native representatives of 13 regions who described a shortage of police, prosecutors and public safety infrastructure in the Bush.

Sometimes plans change and you have to take a military transport plane to your next round-table discussion. Thanks for the lift, @AKNationalGuard! #AdventuresWithAGBarr @TheJusticeDept pic.twitter.com/C46S97Y61T

“I’ve heard a number of specific proposals that aren’t necessarily resource intensive. But obviously money is an important part of the solution,” Barr told the Daily News after a 90-minute tour of the crime lab Thursday. “The important thing is to figure out where we are headed, where those resources are going to be spent and what kind of system they are going to support.”

Several regional leaders called on Barr to support and expand efforts to allow village tribal courts to handle certain criminal cases. A pilot program in the U.S. House version of Violence Against Women Act would hand such authority to up to five villages. Tanana Chiefs Conference Chairman Victor Joseph said the idea should be expanded to as many as 100 communities where the populations are mostly Alaska Native.

In a brief interview, Barr did not rule out Department of Justice support for tribal court authority.

“When I was up at Galena I heard about some of the tribal courts and what they’re up to,” Barr said. “I need to explore that further. Exactly, where they are functioning and what their record is. But as I said today up in Galena, I’m open to all ideas.”

Barr is expected to visited Bethel and possibly the nearby village of Napaskiak today. This story will be updated with reports from Western Alaska as Barr meets with service providers and residents.