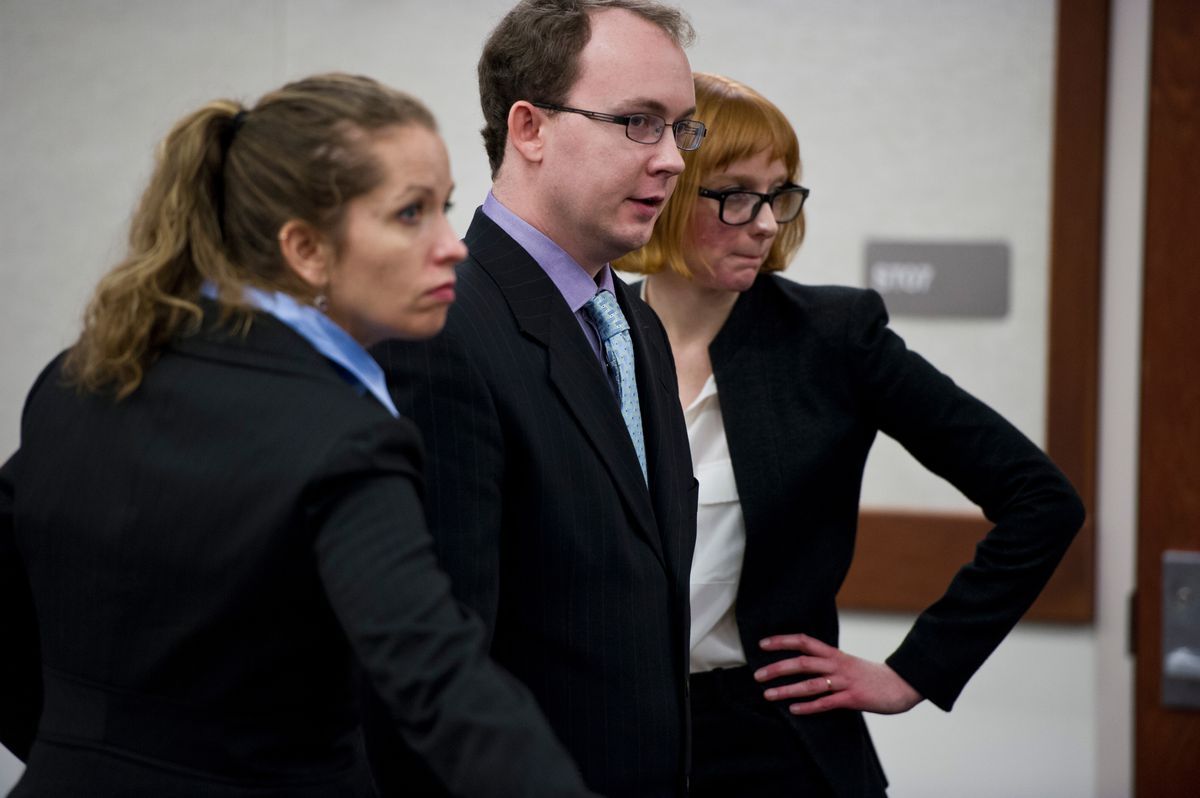 A jury began hearing testimony in the murder trial for Clayton Allison, center, on January 15, 2015, in Palmer. Allison was charged with homicide in the death of his 15-month-old daughter, Jocelynn Allison, who died in 2008. He is pictured with lawyers Hannah Thorssin-Bahri, left, and Ariel Toft, right, both of the state public defender's office. (ADN archive)

A jury began hearing testimony in the murder trial for Clayton Allison, center, on January 15, 2015, in Palmer. Allison was charged with homicide in the death of his 15-month-old daughter, Jocelynn Allison, who died in 2008. He is pictured with lawyers Hannah Thorssin-Bahri, left, and Ariel Toft, right, both of the state public defender's office. (ADN archive)

The Alaska Court of Appeals on Friday overturned the murder conviction of a Wasilla man who was sentenced to 30 years in prison in the death of his toddler daughter, saying information about a potentially fatal medical condition the child could have had was wrongly forbidden from trial.

Clayton Allison, 36, was convicted in 2015 of second-degree murder in the 2008 death of his daughter, Jocelyn, who died of traumatic brain injuries that Allison claimed happened when she fell down the stairs.

Prosecutors argued the 15-month-old’s injuries — old and new bleeding in the brain, rib and leg bruises, and dislocated neck vertebrae, among others — were the result of abuse.

Physicians also hadn’t identified any other medical condition that could have caused her injuries, they argued.

According to the appeals court’s opinion, though, Jocelyn had multiple unexplained health problems that her family was seeking genetic testing for. During the trial, the court forbade Allison’s witnesses from discussing a particular genetic condition she might have had that could have made her prone to the internal bleeding that caused her death.

If that information had been allowed at trial, Allison’s attorney’s argued on appeal, the jury might have reached a different verdict.

Ehlers-Danlos syndrome, as it’s called, is a group of nervous system disorders affecting the body’s connective tissues. It can cause those who have it to bleed and bruise more easily, and in its most severe form, it can cause blood vessel and organ walls to rupture.

Those complications have sometimes been mistaken for child abuse, according to one of Allison’s physician witnesses.

Christiane “CJ” Allison, Clayton Allison’s wife and the child’s mother, was diagnosed with a form of the disorder after her daughter’s death.

But during the trial, Palmer Superior Court Judge Vanessa White sided with prosecutors, who argued the potential diagnosis was too speculative to allow as evidence, according to the appeals court’s opinion.

White also threw out a 2009 admission of abuse from Allison, finding it coerced.

The information about Ehlers-Danlos syndrome would only be admissible if the defense could produce experts in the condition who could explain Christiane Allison’s diagnosis and also diagnose Jocelyn “to a reasonable degree of medical certainty,” White ruled.

The appeals court found that standard wrongly placed the burden of proof on Allison to prove his innocence. Additionally, barring evidence that might have cast doubt on Allison’s guilt restricted his ability to defend himself, the appeals court said in its opinion.

“Evidence that there were other possible medical explanations for her excessive bleeding was something that the jury should have heard,” wrote Chief Judge Marjorie K. Allard.

If prosecutors don’t appeal the decision, Allison’s case will be remanded back to state Superior Court, where the state can choose whether or not to retry him.

For Christiane Allison, who maintained her husband’s innocence throughout his trial, the decision comes as a long-awaited relief.

“It’s like a new death every morning,” she said Friday, speaking about her 10-year separation from her husband. “It’s indescribably difficult, but we have soldiered through and we have fought hard.”

Christiane, who maintains a website called freeclaytonallison.com, has spent that time advocating for prisoners’ rights and improved prison conditions. When she called her husband at Goose Creek Correctional Center to tell him about the decision, "he sounded like he was going to fall over,” she said.

“We’re over the moon excited."