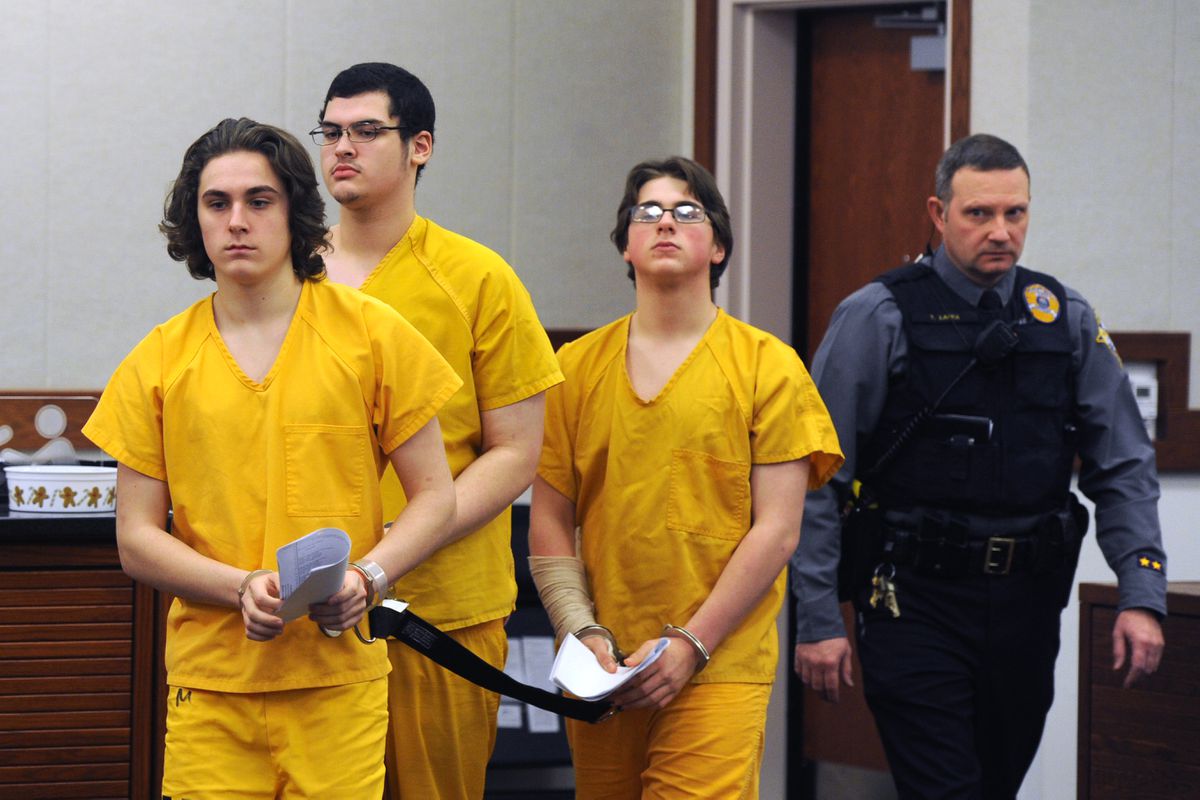 From left, Austin Barrett, Dominic Johnson and Bradley Renfro leave a December 2016 hearing in Palmer Superior Court. Renfro is on trial for the murder in Fairbanks. (Erik Hill / ADN archive)

From left, Austin Barrett, Dominic Johnson and Bradley Renfro leave a December 2016 hearing in Palmer Superior Court. Renfro is on trial for the murder in Fairbanks. (Erik Hill / ADN archive)

The jury deliberation phase began Friday afternoon in the murder trial of the third of four teens accused of beating and killing another teenager near Palmer in 2016.

Bradley Renfro, 19 now, faces charges including first-degree murder, assault, kidnapping, arson, evidence tampering and vehicle theft. His trial began with jury selection in late August in Fairbanks Superior Court after the trial was moved from Palmer to ensure an impartial jury. He spent several days testifying in his own defense.

Authorities say Grunwald came to one teenager’s Palmer home to smoke marijuana and was bludgeoned with a heavy pistol, then driven in his Ford Bronco to a spot near the Knik River and shot in the head. The Bronco was found torched the next day near the Talkeetna Mountains.

Prosecutors say Renfro was part of a group of gang-obsessed teens who acted together. They are applying the legal theory of accomplice liability to argue Renfro is guilty of killing Grunwald because he chose to participate rather than leave.

Renfro’s attorney says his client stayed with the group because he was afraid. Renfro didn’t know about any plan to beat Grunwald before it happened — he testified that Johnson did the pistol-whipping — and went along with the others because he couldn’t leave. Renfro admitted he burned the Bronco.

Two of the others have already been convicted: Erick Almandinger — the beating occurred in a camper behind his house and his tablet contained damning messages — and Dominic Johnson, who messaged Almandinger about some kind of plan and asked for his gun before the beating.

The fourth defendant, Austin Barrett, faces his own trial next year. Renfro testified it was Barrett who fired the fatal shot, and also said Barrett threatened Renfro and the others with the same fate if they talked about the crime.

The jury will start actively deliberating on Monday morning.