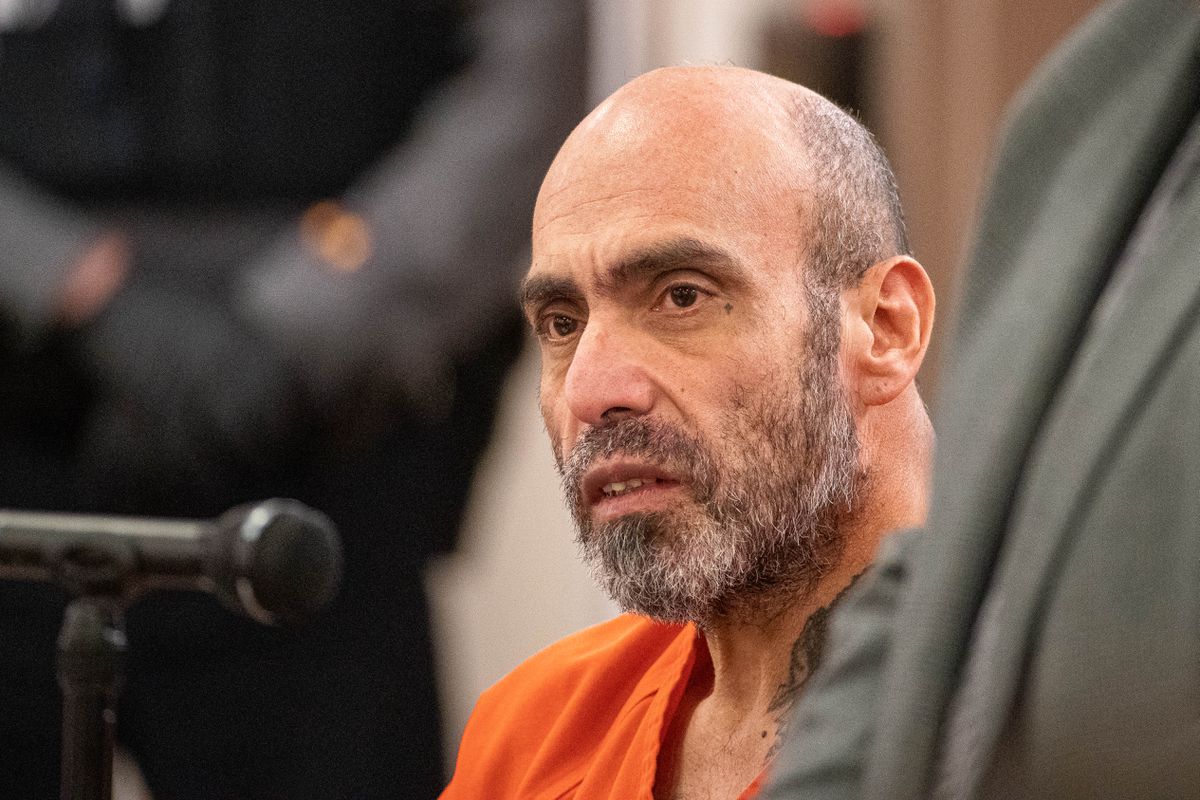 Juan Camarena is arraigned on charges of sexual assault, sex trafficking and assault Tuesday, Nov. 26, 2019 at the Palmer courthouse. Camarena is also a "person of interest" in an early November triple homicide near Wasilla, according to Alaska State Troopers. (Loren Holmes / ADN)

Juan Camarena is arraigned on charges of sexual assault, sex trafficking and assault Tuesday, Nov. 26, 2019 at the Palmer courthouse. Camarena is also a "person of interest" in an early November triple homicide near Wasilla, according to Alaska State Troopers. (Loren Holmes / ADN)

PALMER — The only person in the courtroom to support 51-year-old Juan Camarena during his arraignment on felony sex assault charges Tuesday was a woman who described herself as his girlfriend — and wrongly described victim.

The woman, 29-year-old Kimberly Kidrick, said in an interview with reporters after the hearing that Camarena “didn’t do any of it” and the sex acts were consensual.

Camarena, a convicted felon out of California, is described by Alaska State Troopers as a person of interest in a Nov. 2 triple homicide near Wasilla.

Camarena has not been charged with any crimes directly related to the killings.

During Tuesday’s hearing, he asked to plead not guilty in the sexual assault case and then was assigned a public defender. He said he made less than minimum wage doing “different jobs for different people.”

When the hearing ended, Kidrick walked out behind assistant district attorney Krista Anderson, saying, “You guys are f---ed up.” She entered a room for a closed-door conversation with the prosecutor.

“They’re trying to make him the bad guy,” Kidrick said after she emerged. She said she hopes the charges will be dropped.

Anderson did not immediately respond to a request for comment. The troopers declined to answer questions.

“This matter is going through the courts at this point,” Department of Public Safety spokeswoman Megan Peters said in an email. “We are not able to provide you with any commentary regarding a witness’ or victim’s potential statements.”

Camarena is also in federal custody after being indicted last week on federal weapons charges. Troopers found 16 live rounds throughout a fifth-wheel trailer near Wasilla where several people said Camarena lived. The ammunition matched the .40-caliber shell casings found by the bodies of the homicide victims.

Camarena has multiple felony convictions out of California and served time in prison there, prosecutors say. As a felon, he is prohibited from purchasing firearms.

Camarena was previously convicted for participation in a street gang, methamphetamine trafficking, assault with a deadly weapon and evading a police officer, according to an alert from Anchorage police last week.

The state case against him came last week after a Palmer grand jury indicted him on sexual assault, sex trafficking and assault charges.

The indictment accuses Camarena of sexually assaulting the victim in the living room of a trailer near Wasilla in September and forcing them to have sex while others watched in exchange for drugs. He is accused of hitting the victim in the head with a rock the next month and holding a gun next to their head and firing.

Kidrick says she’s the person described as the victim in the charges, and that Camarena did nothing criminal. The Anchorage Daily News does not identify victims of sexual assault without their permission.

Kidrick said she’s known Camarena, whom she met through a friend, for a period of months. They shared a trailer near Wasilla. She’s from Mat-Su. She said he’s lived in Alaska for some time.

Asked directly about the gun fired near her head, she said Camarena was protecting her from a rabid squirrel and shot past her. She said it wasn’t a real gun, suggesting it was a pellet or BB gun.

Kidrick said she was engaged to Attwood at one time, and knew all three of the homicide victims. She said Camarena knew Atwood, who was considering living near them but changed his plans. She several times said Camarena is not responsible for the killings and was in Big Lake when they occurred.

Kidrick is on an ankle monitor, she said. She faces separate trials on felony theft and domestic violence assault charges from 2018 and 2019, according to a state courts database.

Palmer Superior Court Judge William Estelle at Tuesday’s hearing set Camarena’s bail at $500,000 cash — $250,000 each appearance and performance — after Anderson requested that amount due to his flight risk and lack of ties to the community.

As Camarena left the courtroom, he could be heard saying something to Kidrick.

“I love you too,” she replied.