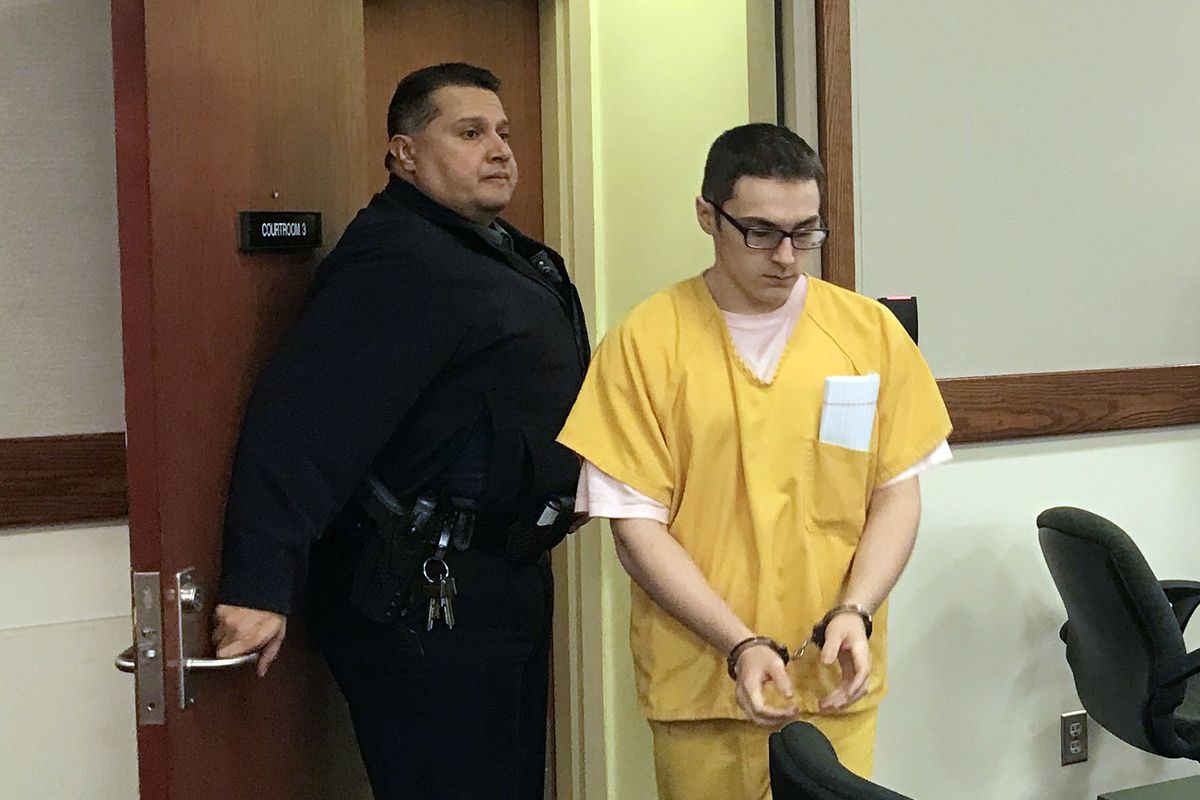 Austin Barrett enters a Palmer courtroom Thursday during a hearing to decide what evidence a jury will hear during his trial for the 2016 murder of 16-year-old David Grunwald. Barrett is the last of four to stand trial. (Zaz Hollander / ADN)

Austin Barrett enters a Palmer courtroom Thursday during a hearing to decide what evidence a jury will hear during his trial for the 2016 murder of 16-year-old David Grunwald. Barrett is the last of four to stand trial. (Zaz Hollander / ADN)

Grunwald’s murder in November 2016 drew national attention for its combination of teenaged defendants, lack of specific motive and clean-cut victim. Grunwald was beaten in a trailer behind a Palmer home, then driven in his Ford Bronco to the Knik River, where he was shot and killed. His body wasn’t found for more than two weeks.

Austin Barrett, 19 at the time and the oldest of the four eventually arrested in the murder, originally agreed to answer questions when Alaska State Troopers picked him up for questioning a few weeks later near Wasilla, put him in handcuffs and brought him to the troopers post in Palmer.

But fairly early in the session, a transcript shows, Barrett said he “wanted to plead the fifth” or refuse to answer a question to make sure he didn’t incriminate himself.

The investigators continued talking to him, though the lead trooper on the case testified in court this week that he stopped asking specifically about the murder.

Barrett’s attorney, Craig Howard, contends a jury shouldn’t hear a significant portion of Barrett’s statements because investigators violated the rights expressed in the Miranda warning given to criminal suspects in custody, which includes the right to remain silent.

The investigators also did not tell Palmer District Attorney Roman Kalytiak, the lead prosecutor on the case, that Barrett had mentioned pleading the fifth or that he had been read his Miranda rights, according to testimony during a hearing in Palmer this week.

The troopers took Barrett to the nearby DA’s office that day once it became clear he might be looking for a deal in exchange for his testimony. Kalytiak met with them, and Barrett made a fairly lengthy statement.

“He’s engaging a suspect who has invoked his right to remain silent,” Howard said.

At the district attorney’s office, Barrett admitted he was at the trailer, in the Bronco and at the Knik — enough to convict him on felony murder charges, his lawyer said.

Juries in Palmer and more recently Fairbanks have convicted three of the defendants on first-degree murder, kidnapping and other charges: Erick Almandinger, Dominic Johnson and Bradley Renfro. They have yet to be sentenced.

Barrett’s trial is scheduled for April. Both Almandinger and Renfro have identified him as the shooter. He told investigators Almandinger fired the fatal shot.

A hearing in Palmer court that started last week will determine what evidence the jury will hear. The hearing is expected to end Friday.

Wegrzyn testified this week that Barrett was bright and willingly agreed to answer questions after the investigator read him his Miranda rights that December day. The troopers made it clear Barrett could leave anytime, the transcript shows, and told him he’d be going home no matter what he said that day.

When Barrett later paused after a question and said, “I guess I want to plead the fifth” and wait until a grand jury proceeding the next day, Wegrzyn said he understood the remark to mean Barrett didn’t want to incriminate himself.

He testified this week that he thought the teen was willing to keep going with general questioning, as evidenced by the fact that Barrett kept talking.

Howard also called Kalytiak to the stand, only the second time in his 40 years practicing that he’s called a prosecutor to testify.

Kalytiak said he didn’t think Barrett needed to be read his Miranda rights at his office because the troopers said he wasn’t in custody and could leave at any time. He said he took steps to make sure Barrett’s statement was voluntary.

Judge Gregory Heath, who is retired but continues to handle the case, will issue a ruling on whether all of Barrett’s statements are admissable in court.