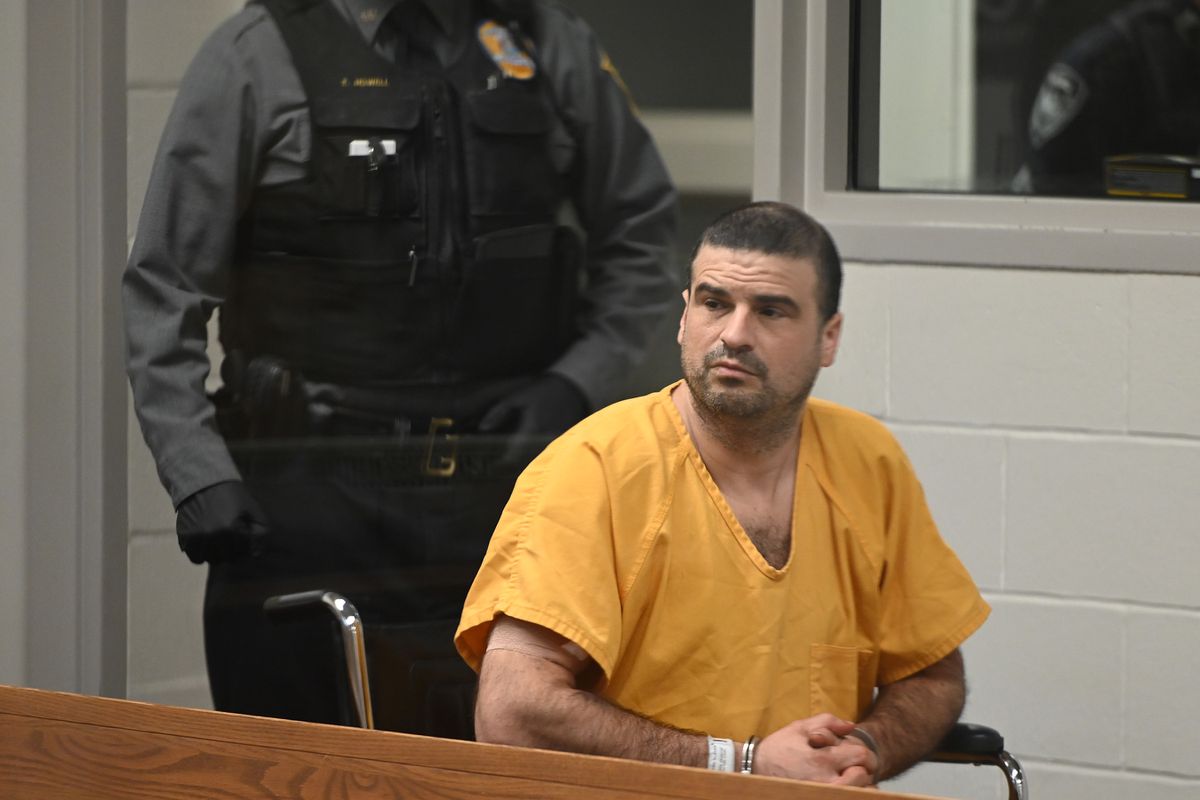 Dustin Folse was arraigned in the Anchorage Jail Court on Monday, Jan. 13, 2020, they day after being shot by Anchorage Police after he pointed a crossbow at responding officers at the intersection of Huffman Road and Industry Way in South Anchorage on Sunday. (Bill Roth / ADN)

Dustin Folse was arraigned in the Anchorage Jail Court on Monday, Jan. 13, 2020, they day after being shot by Anchorage Police after he pointed a crossbow at responding officers at the intersection of Huffman Road and Industry Way in South Anchorage on Sunday. (Bill Roth / ADN)

Folse was indicted by a grand jury in Anchorage for the attempted murder of two Anchorage police officers.

Folse is scheduled to appear in court on January 21.

He may face as many as 99 years in prison per attempted murder charge if he’s convicted, according to the release.

Anchorage police said officers Theodore Freitag and Kylie Baker fired shots at Folse. Freitag has been with the department since 2008 and Baker has been there since 2017, police said.

A man who pointed a crossbow at police before they fired shots at him Sunday in South Anchorage may be facing an additional charge of attempted murder, according to a prosecutor.

Dustin Folse, 35, appeared in a wheelchair for his arraignment hearing Monday afternoon on charges of reckless endangerment and assault on a police officer. He was shot multiple times in the leg, police said.

Officers were called to 36th Avenue and Spenard Road around 9:30 a.m. Sunday because a man in dark clothing and a ski mask was pointing a crossbow at passersby, Chief Justin Doll said Sunday. Officers didn’t find him at the scene, but Doll said a caller reported at 11:30 a.m. that the man was targeting vehicles with the crossbow near Huffman Road and Brandon Street.

A witness told investigators Folse “made a beeline” toward an officer as she got out of her vehicle at the intersection of Huffman Road and Industry Way. He raised the weapon, appearing to point it at the officer as she tried to take cover behind her vehicle, the charging document said. A second officer fired his or her gun at Folse, and the other officer also shot at him, charges said.

Folse fell to the ground, where “it appears he discharges the crossbow and is shot again,” charges said. He dropped the weapon before running south across Huffman Road, according to the charges.

Officer-Involved Shooting Investigation Update: APD Case 20-1384 Update: The preliminary investigation found that around 9:30 a.m. Dispatch received reports of a suspicious person pointing a weapon at people in the area of Spenard Road and 36th Avenue. He was described as an adult male who was wearing all black clothing, a ski mask and carrying a cross bow. When officers arrived, the suspect has left the area. Around 11:27 a.m., Dispatch received reports of the same suspicious person with the cross bow in the area of Huffman Road and Brandon Street. The reports were the adult male suspect was pointing the weapon at people and motorists as he was walking in the area. When officers arrived on the scene, they immediately located the suspect in the area of Huffman Road and Industry Way. The suspect pointed the weapon at the officers and two officers fired their weapons, hitting the suspect in the leg. The suspect fled on foot and was taken into custody at apartment complex on Silver Fox Lane. He was transported to a local hospital with non-life threatening injuries. No officers were injured. No citizens were injured. The two officers involved have been placed on mandatory administrative leave. Their names will be released in 72 hours per protocol. The case will be given to the Office of Special Prosecution for review. An Internal Affairs investigation will be conducted as well. The Crime Scene Team and detectives are assisting with this investigation. Anyone with information about this investigation, including video, is asked to call Dispatch at 311. Road closures in the area will continue to several more hours. Please follow officer’s commands if you need to be in the area.

A witness recorded the incident on his cellphone camera, and charges said the incident was also partially captured by a police cruiser’s dashboard camera.

Folse was treated at the hospital for two gunshot wounds, charges said.

A stray bullet pierced the window of a laundromat in the Huffman Square Shopping Center across the road.

Folse spoke at length during his arraignment hearing Monday and repeatedly told the court he was “badly being digitally imaged by felons" and had been brainwashed.

A prosecutor said the state may pursue an attempted murder charge against Folse as the investigation continues. He is being held on a $20,000 bond.

Folse has outstanding warrants in Louisiana for a misdemeanor charge of sexual battery and is wanted in Oregon on charges of unlawfully purchasing a firearm.

Both officers who fired shots at Folse were placed on a mandatory administrative leave and their names will be released after a 72-hour waiting period, Doll said.