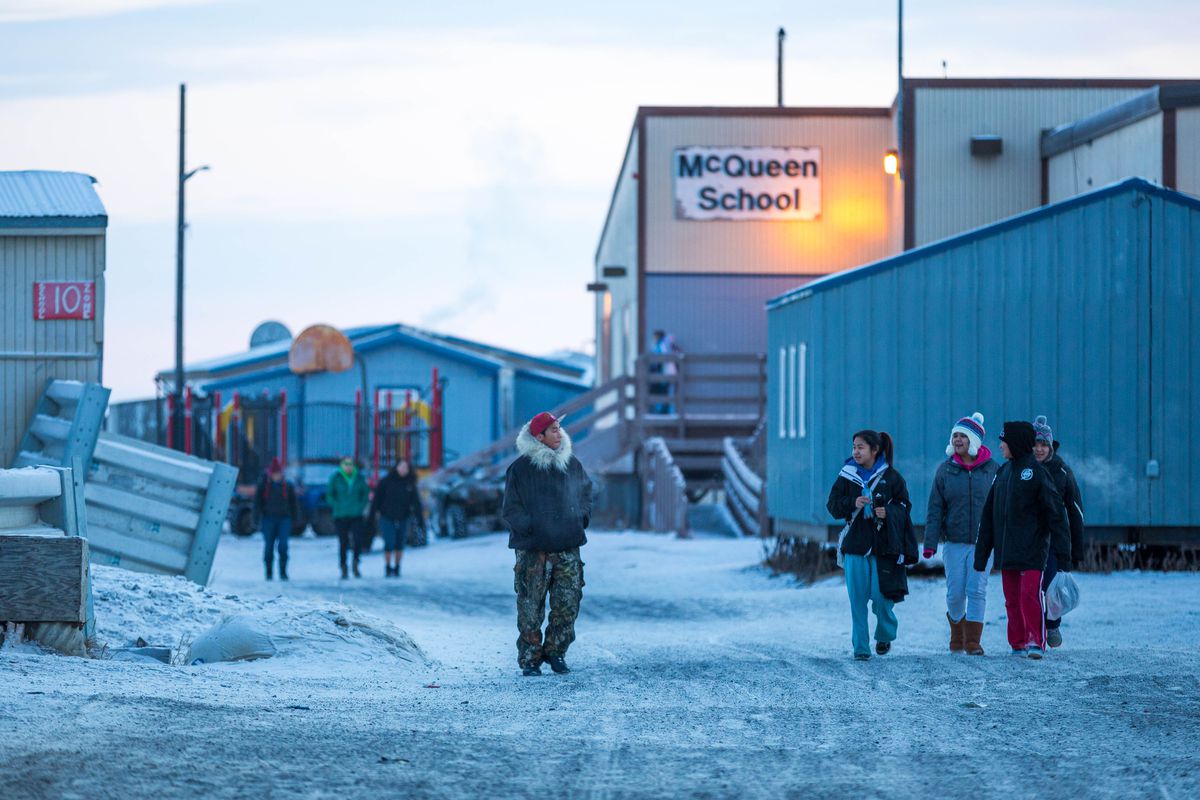 Officials from a northwest Alaska school district would not comment Friday on their policies for hiring substitute teachers after the FBI arrested a 21-year-old former substitute for the district this week on child exploitation charges.

Jayson Knox, who worked as a substitute teacher at the McQueen School in the village of Kivalina, is accused of sending and asking for naked pictures from several girls at the school, according to an affidavit submitted by FBI special agent Jolene Goeden that was filed with the charges on Thursday.

The FBI is also accusing Knox, who is from Kivalina, of attempting to meet with girls for sexual interactions, according to the affidavit.

In total, Knox is accused of inappropriately communicating with 10 children, according to a statement from the U.S. Attorney’s Office for the District of Alaska.

Knox, known by the nickname “Birdie,” started working at the school as a substitute teacher in 2018, the FBI agent wrote in the affidavit.

The McQueen School has around 140 students, according to its website.

It’s unclear when Knox stopped working at the school. It is also unclear how often and for how long he substituted there. Asked by email about Knox’s arrest and work history at the McQueen School, the school’s principal, Lyle Melkerson, declined to comment on Friday morning.

Sondra Meredith, administrator for teacher education and certification at the Alaska Department of Education, said that there’s no statewide policy for hiring short-term substitute teachers.

The choice to conduct background checks for short-term substitutes is left up to individual Alaska school districts, Meredith said.

“I can’t say 100% sure, but most districts have an onboarding process for their substitutes that include background clearances at the local level,” Meredith said.

Knox does not appear to have any criminal record in state and federal databases.

Long-term substitute teachers — those who work at a school for more than 20 days — do have to be licensed as a teacher in the state, Meredith said.

“If somebody had a medical issue and they were going to be gone for more than three weeks, the district would be obligated by regulations to look to find a fully certified teacher to take over that classroom,” Meredith said.

Full-time teachers are required by the state to have a bachelor’s degree or higher and to have completed a teacher preparation program. They are also required to pass a competency exam and go through certain training. Additionally, they are subject to a multi-step background process, Meredith said.

Several students told a McQueen School teacher about Knox’s behavior in September, according to the FBI agent’s affidavit. They told the teacher that he’d asked for nude pictures and also asked to meet with them.

In January of this year, an Alaska State Trooper interviewed Knox and several children in Kivalina, the FBI agent wrote in the affidavit.

During the interview, Knox said that he’d communicated with “several girls, texting them to go do fun stuff with me," and also that he knew what he’d done was wrong, according to the document.

He told the investigators that his communications with the girls started after he began working at the school, the affidavit says.

The FBI is reviewing his cellphone, according to the document.

In a Feb. 7 interview with FBI special agent Goeden, Melkerson, the school’s principal, said a girl had told him that Knox “was looking at her weird,” the affidavit said.

Days later, several girls told a teacher at the school that Knox had asked them for naked pictures, according to the affidavit.

Knox was arrested on charges of attempted exploitation of a child, transfer of obscene material to a minor and attempted coercion and enticement of a minor.

If convicted, Knox could be sentenced to life in prison and a minimum of 10 years behind bars, according to the U.S. Attorney’s Office.

The FBI is requesting that if the public has any further information regarding Knox’s activities, they should call (907) 276-4441.