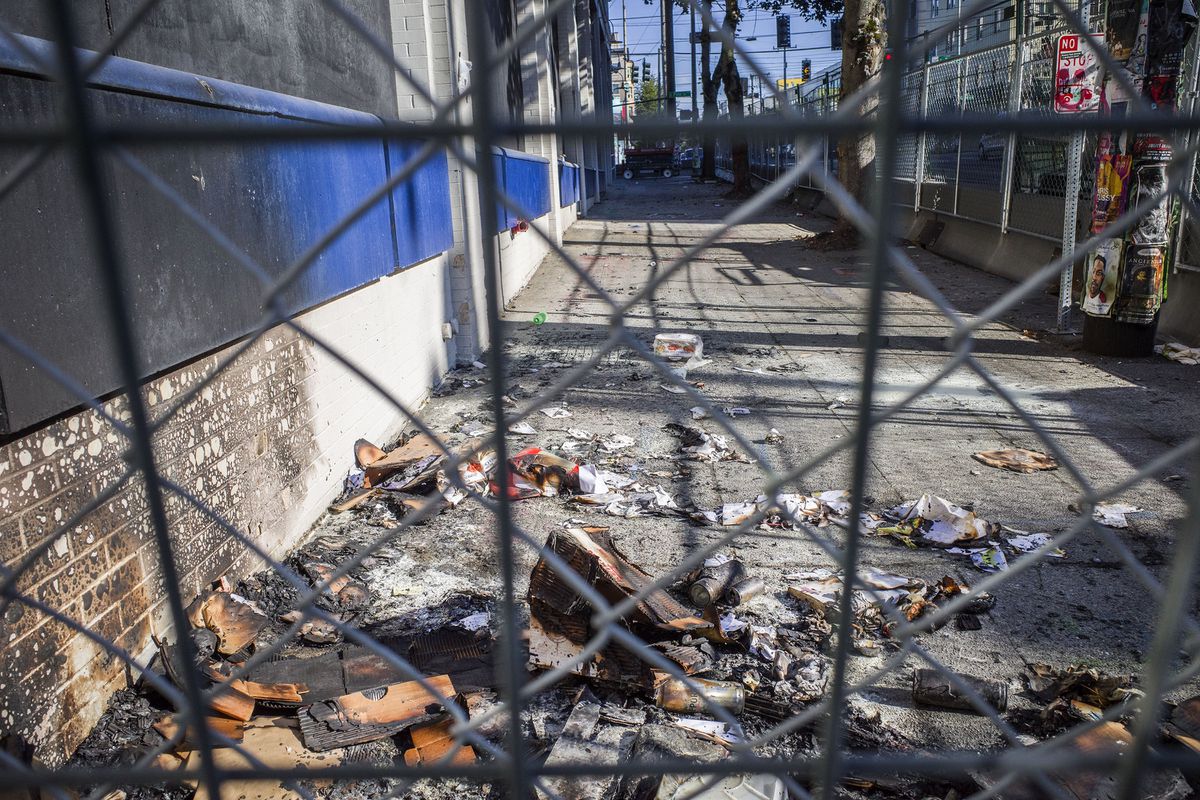 A fire was set outside by protesters at the Seattle Police East Precinct on the sidewalk against the building, shown on Aug. 25, 2020. (Steve Ringman/Seattle Times/TNS)

A fire was set outside by protesters at the Seattle Police East Precinct on the sidewalk against the building, shown on Aug. 25, 2020. (Steve Ringman/Seattle Times/TNS)

A 19-year-old Anchorage resident whose younger brother died in a shooting by police in February now faces a federal arson charge for setting a fire outside a Seattle police station with officers inside.

Desmond David-Pitts was arrested early Tuesday morning in Seattle during protests over Sunday’s police shooting that paralyzed Wisconsin resident Jacob Blake. Police broke up a crowd of protesters in the Capitol Hill area, the Seattle Times reported. Some climbed over a chain-link fence and set a fire next to the building, the Seattle Police Department said in an online post. “Individuals also placed quick-drying cement in exterior precinct door locks.”

A video shows a number of officers leaving the building almost immediately. Some start to put out the flames.

David-Pitts was arrested within an hour, without incident, after police spotted him yelling obscenities at them and wearing the same distinctive clothes he wore when he was captured on video setting trash on fire next to a secure garage door, according to a complaint federal prosecutors filed Thursday in U.S. District Court in Seattle.

David-Pitts admitted he started the fire after he told police he arrived in Seattle three days earlier to participate in the ongoing protests, according to the complaint. Surveillance video showed him piling trash against a door at the precinct, then lighting it on fire and adding more trash. He was also seen communicating with two other groups of protesters, one that tried to barricade a door and the other that broke through a chain-link fence and started another fire.

During a subsequent interview, David-Pitts described having “bad experiences with police,” according to an affidavit filed by Special Agent Michael Collier, with the Bureau of Alcohol, Tobacco, Firearms & Explosives.

“He stated that as the protest went on, ’My stupid ass got angry. So that’s exactly why I was acting the way I did. I’m accountable,’” Collier wrote.

David-Pitts answered “Yes ma’am” to several questions from Magistrate Judge Mary Alice Theiler before she appointed a federal public defender to represent him during a brief court appearance Thursday. He is scheduled for a federal detention hearing on Tuesday. If convicted, he faces a mandatory minimum of five years in prison up to 20 years, a fine up to $250,000 and up to three years supervised release, Assistant U.S. Attorney Todd Greenberg said during the hearing.

His arrest marks the fourth time that a protester has been charged with federal crimes in connection with civil unrest this summer in Seattle.

David-Pitts participated in Black Lives Matter protests over the summer in Anchorage and Palmer. At an Anchorage event in June, he told the story of his brother, 16-year-old Lufilufilimalelei “Daelyn” Polu, who was shot and killed during a traffic stop near Merrill Field early the morning of Feb. 16. The officers said Polu fired on them before they used their weapons, and one of the officers was hit and injured.

David-Pitts questioned the findings of an official report about the fatal encounter.

An investigation into the incident by the state Office of Special Prosecutions resulted in no charges being filed against Officer Jason Cusack, who fired the shots that killed Polu. Another officer involved, Brian Vanderbunt, was hit during the encounter but not seriously injured.

According to a use of deadly force review report filed by assistant attorney general Jenna Gruenstein, Vanderbunt pulled over a car after it made an illegal U-turn and started suspecting it was stolen when the driver had no paperwork and couldn’t name the registered owner. Cusack happened to be patrolling nearby and helped.

The officers described Polu as uncooperative and said he refused to identify himself or step out of the vehicle. Then, they said, he produced a handgun from his jacket after reaching for his right side.

“The officers can be heard on the audio telling (Polu) ‘don’t reach for it,’” Gruenstein wrote.

An in-car video shows the officers struggling to pull the teenager out of the car and two gunshots fired in rapid succession — one hitting Vanderbunt and the other going between the officers, according to the report. The others in the car during the traffic stop described Polu being uncooperative and asking the driver to flee, but said they didn’t see him firing a gun.

Vanderbunt, trying to pin the teen’s arms, said he heard gunshots and then saw the gun in Polu’s hands, according to the report. He said he tried to grab the gun close to his chest so any bullets would hit his vest. Polu fired again and the officer continued to struggle with him for control of the teenager’s gun, the report states. A bullet was later found to have hit and damaged the officer’s metal badge.

Cusack said he saw Polu’s arm extend from the car holding a gun and moved to the rear of the vehicle, then heard the first shot. He said he fired two shots at the back of Polu’s head before he fired a third time.

Polu was declared dead at the scene. Police say they found a black metal magazine in his hand and a black and silver Taurus handgun in a snow berm without a magazine.

Family members continue to question the report. A change.org petition demanding the case be reopened had nearly 6,000 supporters as of Thursday.

David-Pitts has a brief criminal history in Alaska that includes a misdemeanor conviction in 2019 on charges of assault by words or conduct, and disobeying a lawful order of a public officer.

That plea deal stemmed from an incident in April 2019 near East Ninth Avenue and Karluk Street, according to a probable cause statement municipal prosecutors filed with charging documents. A male driver saw a van stopped at an intersection and honked as he passed, according to the statement. A woman started kicking his vehicle and David-Pitts jumped onto the hood and pulled on the wiper blades. The woman opened the passenger door, the male driver told police, and he drove off with David-Pitts on the hood, though he fell off. David-Pitts was described as combative during his arrest.

The only other court charges on file are several traffic violations this year for speeding and driving without a license and insurance.