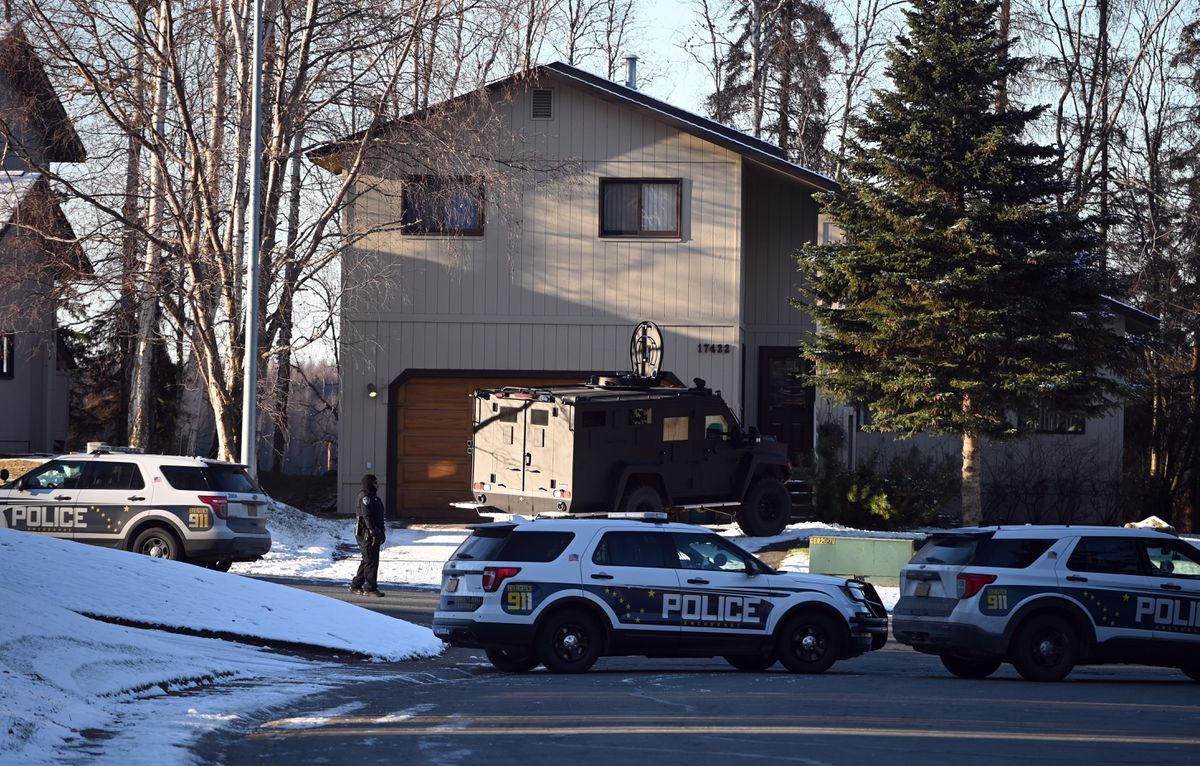 An Eagle River neighborhood was the scene of a SWAT standoff and an officer-involved shooting October, 22, 2020. (Bill Roth / ADN)

An Eagle River neighborhood was the scene of a SWAT standoff and an officer-involved shooting October, 22, 2020. (Bill Roth / ADN)

Anchorage police fatally shot a man who they say was armed with a shotgun Thursday morning in a SWAT standoff at an Eagle River home.

Officers were called to a home on the 17400 block of Toakoana Drive around 5:47 a.m. for a domestic disturbance between a man and other family members, police wrote in an online alert.

The three family members were able to leave the home before police arrived, but Police Chief Justin Doll said that the man refused to leave and barricaded himself inside the home. Police spoke with the family and the suspect, and Doll said they determined there was probable cause to arrest the man for domestic violence assault.

Doll said it was not clear if any of the three family members were injured or to what extent they may have been injured. Police believe all of the family members involved live at the home, Doll said.

After attempts by police to talk the man into coming out of the home were unsuccessful, police called in the SWAT team to respond, Doll said. The department deploys the SWAT team when suspects are known to be armed, believed to be in a position of tactical advantage, are a threat to the public and are suspected of having committed a crime, Doll said.

Members of the SWAT team reached the man by phone and determined he had been and was continuing to consume alcohol, Doll said. The man threatened to kill himself several times, including mentions of suicide by police force, Doll said.

After roughly two hours of attempted police negotiations, Doll said, the man hung up the phone at 10:09 a.m. and walked outside the home with a shotgun.

“Five SWAT officers fired their weapons; the suspect was hit and declared deceased at the scene,” police said in an updated alert Thursday afternoon. No officers were injured, according to police.

Doll said it was not immediately clear if the man had pointed the shotgun at officers or fired toward them before he was fatally shot.

APD said it will identify the man once next of kin has been notified.

The officers were placed on four days of administrative leave and will be identified after 72 hours, police said. The Office of Special Prosecutions will determine whether the officers' use of force was justified, and Internal Affairs will evaluate whether APD policy was followed.

The 17400 block of Toakoana Drive was closed early Thursday as police cars surrounded the residential street. A black SWAT vehicle was parked in front of a home on the block.

Doll said the department is continuing to investigate the shooting.

This is the fifth time in 2020 that officers have fired at suspects within the Municipality of Anchorage, and the second police shooting this year to turn deadly. Officers fatally shot 16-year-old Lufilufilimalelei “Daelyn” Polu in February during a traffic stop. Police said Polu fired at officers before they fatally shot him.