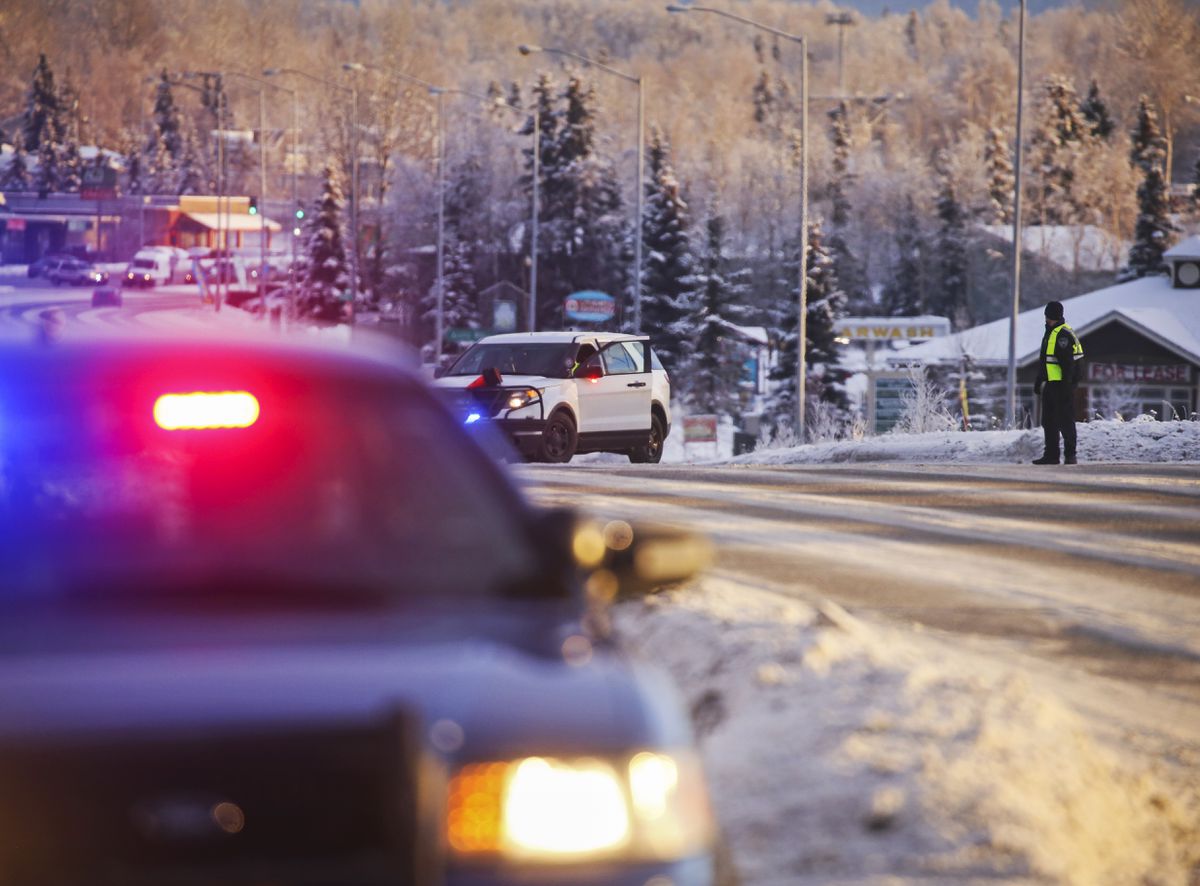 A 45-year-old man has been charged with murder after an apparent fatal dispute over his wife with another man, who was found dead following a single-vehicle crash on Dimond Boulevard on Thursday morning. The victim was identified Monday as 49-year-old Maataua Manogiamanu.

The man found dead in the crash appeared to have a gunshot wound, Anchorage police said Friday.

A charging document filed by prosecutors in the case reveals more details about the events leading to the fatal shooting and crash, including the argument over the suspect’s wife, who had recently left him.

The suspect, Patrick Leu Tauanuu, faces two murder charges in the first and second degrees in state court, according to the charging document. His arraignment is scheduled for Saturday afternoon.

Anchorage police received multiple emergency calls Thursday morning about a serious crash at Dimond Boulevard and Minnesota Drive about 8:00 a.m., according to the charging document.

Patrol officers arriving at the scene found a 2007 blue Chevrolet Tahoe “disabled” at the southeast corner of the Minnesota Drive overpass with a single occupant inside who appeared dead, according to the document.

While investigating, officers reviewed traffic surveillance videos, which show that immediately before the crash, the Tahoe’s driver was involved in a “disturbance” with someone driving a white truck, the document says.

In an online alert, police said that officers found what they believed to be a gunshot wound on the driver, an adult male.

Police will release the driver’s name after completing next of kin notification procedures, police spokeswoman Kendra Doshier said in an emailed statement.

Police said surveillance videos of the area near Dimond and Minnesota Drive showed “suspicious activity” involving a Toyota Tundra pickup and a Chevrolet Tahoe SUV before the crash around 8:30 a.m., according to the online alert.

“There appeared to be a conversation or exchange between the two vehicles before the Tahoe ran the red light and turned west on to Dimond Blvd,” the document says. “The white truck executed a U-turn and followed the Tahoe through the intersection.”

Police later found a “spent shotgun hull” and broken glass near where the two vehicles were stopped.

The video shows the truck following the Tahoe west on Dimond, appearing to be side-by-side as they near Minnesota Boulevard, the document says.

The Tahoe then accelerated west, “veering across the median and hitting a traffic pole on the southwest corner. The impact caused severe damage to the Tahoe and the driver,” according to a sworn statement from a police officer in the charging document.

The investigation showed that the Tundra driver, later identified as Tauanuu, fired multiple times at the SUV driver, police said.

Officers found “apparent impacts” from gunshots on the driver side of the Tahoe, according to the charging document.

Tauanuu’s wife, Tuvalu Tauanuu, recognized her vehicle as it was being towed during the traffic investigation and contacted officers at the collision scene.

During an interview with police, she told officers that she is married to Tauanuu but had separated from him eight days previously, and that she had been staying with her ex-husband, Maataua Manogiamanu, according to the charging document.

Tauanuu had been calling for her and begging for her to come back, she told police.

Manogiamanu had driven Tauanuu’s wife on Wednesday morning to Tauanuu’s house, where she dropped off her granddaughter, according the the charging document.

Tuvalu told police that on Wednesday she saw that her white truck, a Toyota Tundra, was parked at Tauanuu’s house and said the keys were left inside the house, according to the charging document.

Her vehicle matches the description of the suspect’s vehicle, appearing to be the same white truck in the surveillance video, according to the charging document.

After dropping off the granddaughter, Tuvalu left and went to her workplace, which is about a block from where police found the empty shotgun shell, according to the document.

The charging document does not explain how the violent incident between Tauanuu and Manogiamanu began.

Officers arrested Tauanuu, but the charging document and police statement do not specify where he was apprehended.

Officers asked him about Manogiamanu, and Tauanuu responded that they don’t “see eye to eye,” according to the charging document. He also said that his wife often leaves him for her ex-husband, comes back, and leaves again, the document says.

Tauanuu said he hadn’t meant to do “it,” and that he was sorry, also telling police that he’d fired four times at Manogiamanu using a friend’s shotgun, firing twice at the Dimond and Arctic intersection, and twice again while on Dimond.

At first, he told officers that he’d thrown the gun out of the vehicle window, but later told them it was at his home, according to the charging document.

“Patrick told officers that he’d only wanted to scare Maataua. Patrick asked officers if Maataua was okay,” according to a sworn statement from a police officer in the charging document.

Dimond Boulevard was closed between Arctic Boulevard and Minnesota for much of the day Thursday during the investigation.

“Detectives determined this to be an isolated incident as the suspect and the victim were involved in a domestic dispute,” police said.

Tauanuu has faced multiple previous charges between 1995 and the present, including four previous assault charges, two charges of driving without a license or with a suspended license, two property damage charges, leaving the scene of an accident, and violating conditions of release.