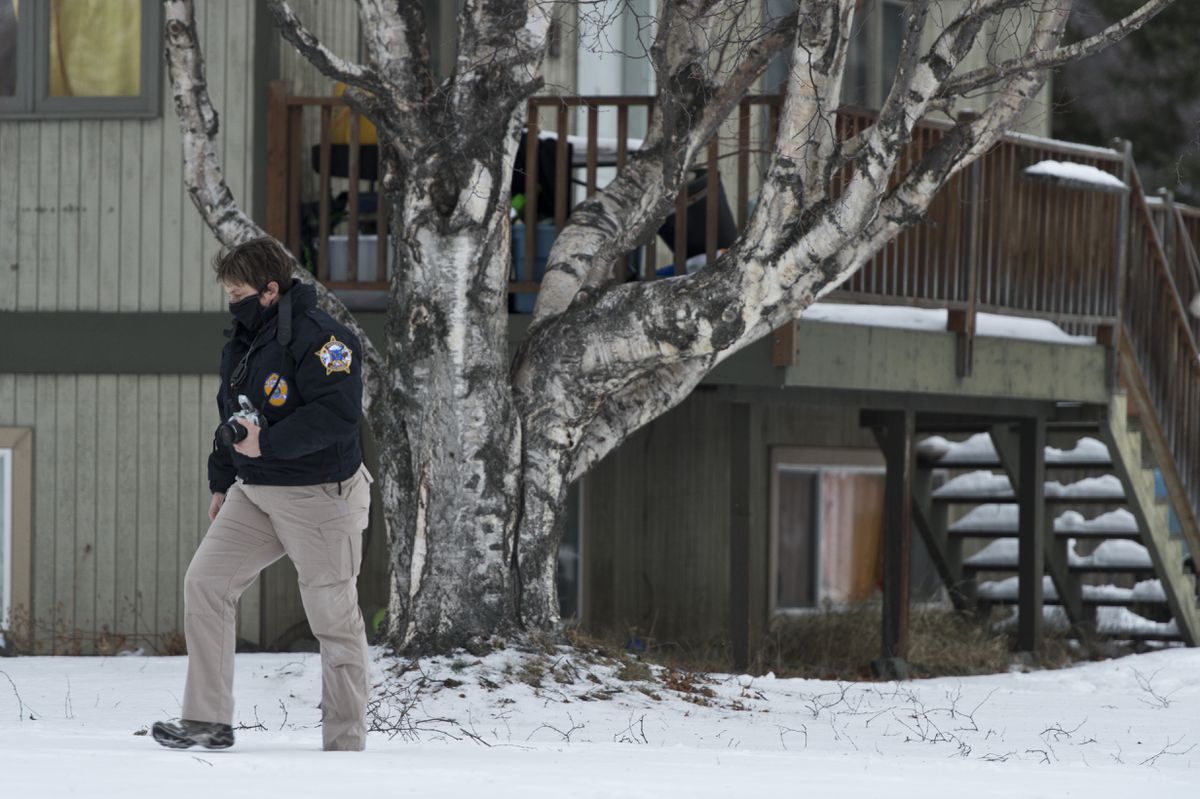 A Palmer teen charged with first-degree murder in shootings that took the lives of his aunt and three cousins appeared in a telephonic court hearing Thursday, but refused to participate.

Prosecutor Melissa Wininger-Howard called Maxon a danger to his family and the community.

“The defendant shot and killed four people in cold-blooded murder, including two young children as they slept in their bed, and their mother,” she said.

Friends this week remembered Buster as an adventurous, positive person with a knack for sewing and crafting who doted on her children. Representatives of the Roehl family declined to comment for this story.

Investigators have not identified a motive for the shootings. Alaska State Troopers were first called early Monday morning to a home near Wasilla where they said Roehl had been shot while sitting on the couch. He died at the hospital from the injuries.

Family told investigators that Maxon had been at the home that evening but went missing after Roehl was shot. A Jeep was also gone from the garage and they believed Maxon had taken a Glock pistol.

About a half-hour later, officers were called to a Palmer apartment and found that Buster and her two children had been shot. Kimora and Ellison died at the apartment and Sienna died at a hospital. Police said Maxon shot the children while they slept in their beds. Spent cartridge casings indicated that he had tried to shoot their youngest brother while he slept against the wall in Ellison’s bed, the charges said. The child was not harmed.

Police said Maxon had been living at the Busters’ apartment just before the shootings.

He was released from jail a week before the killings and was on electronic monitoring after an arrest for an alleged family assault. The electronic monitoring helped investigators locate Maxon. Wininger-Howard said it provides solid evidence for the state’s case because Maxon’s location could be traced from one crime scene to the next.

Maxon was arrested on the Glenn Highway about an hour after the Busters were shot. Maxon tried to escape from custody as he was being moved and grabbed for a trooper’s pistol before he was subdued, court documents say.

Maxon has a criminal history that includes accusations of violent assaults against his family members. He’s facing three assault charges from incidents beginning in July. Court documents show investigators’ references to the possibility the teen suffered from mental illness or substance abuse.

Maxon’s arraignment was continued twice this week when he refused to appear for court. On Thursday, a representative from the correctional system was on the line with Maxon at the Mat-Su Pretrial Facility. Court hearings are being held over the phone during the pandemic.

Maxon refused to participate in the hearing, remaining silent throughout. His public defender, Evan Chyun, answered several of the judge’s questions on his behalf. Chyun was appointed to the case Wednesday and is representing Maxon in his previous assault charges.

Maxon was charged with another count of assault after getting to jail.

Wininger-Howard said that he knocked a correctional officer against the wall when she delivered food to his cell door on Wednesday. The officer had minor injuries and Maxon will face a fourth-degree assault charge for the attack, troopers said.

“Basically every chance the defendant gets, he fights law enforcement and attempts to run,” Wininger-Howard said. “And basically, he has nothing to lose at this point.”

The grandmother of the children who were fatally shot pleaded for Maxon to be detained Thursday.

“I do not want him out,” she said. “I want my grandson protected.”

Buster’s friend and neighbor Kelli Marina Iverson took the time Thursday to write a tribute on social media to Buster and her children, who played with Iverson’s kids.

Iverson described Buster’s motorcycle adventures, her understanding and love of God, and “most of all” her love for her children.

“She would untangle their curls and grab their faces and just breathe them in pressing her nose to their cheeks. She loved them deeper than I’ve ever seen a mother love her children,” Iverson wrote.

Buster was a talented seamstress — she sold handcrafted kuspuks — with a workspace that “was an incredible eclectic assortment of patterns and fabrics,” she wrote.

The 10-year-old, Sienna, baked with Iverson and talked about the different anime she liked, about how she wanted to learn Japanese and about “My Hero Academia,” a Japanese superhero manga series. She liked to sing along to Billie Eilish music videos on YouTube.

“Sienna had the most beautiful voice,” Iverson wrote.

The 7-year-old boy, Ellison, played with her son and they laughed about internet memes, played with Roblox action figures and “played pretend in their own little world,” she wrote. “They all jumped on the trampoline and enjoyed each other’s company.”

The youngest child, who survived, loves pancakes with peanut butter and blueberries, stuffed animals and plushies including his favorite, Mario.

The boy “would cling to Kimora’s arm and press his face in it as a pup nuzzles their mom,” Iverson wrote.

Kim Thorp, a longtime friend of Kimora’s and her boss at Arctic Herbery, said she was endlessly positive and filled her free time with crafting and sewing. She dreamed of being a fashion designer and opened a “Thriftique” in Wasilla several years ago, according to the Mat-Su Valley Frontiersman.

Kimora would go out of her way to help others, Thorp said, especially when it came to her family.

“If you needed something, she would find a way to give it and that’s what made her so special,” Thorp said. “She just always looked on the positive side of things and would help you in any way that she could.”

Thorp said Kimora constantly talked about her children and was a doting mother. She had recently reduced her hours at Arctic Herbery, where she had worked for the last few years, so that she could help her children more as they navigated online learning during the pandemic.

Iverson described the family as good, genuine, caring and compassionate people and urged others to say prayers for the lost family and the youngest boy.

“I could go on and on about what an amazing friend, mother and person Kimora was, I could go on and on about how beautiful and heartwarming her children were,” Iverson wrote. “Our hearts are heavy. The world is a lot darker without them. Their souls are within us and living on in the mountains she would admire and the sky she would look up to, appreciate, and breathe in. Her and her children need to be remembered by the incredible people they were not by the horrific moment that took place Monday morning.”

The Buster family said they are grieving the tragic loss and started an online fundraiser to support surviving family members. Another fundraiser was started by the Roehls.