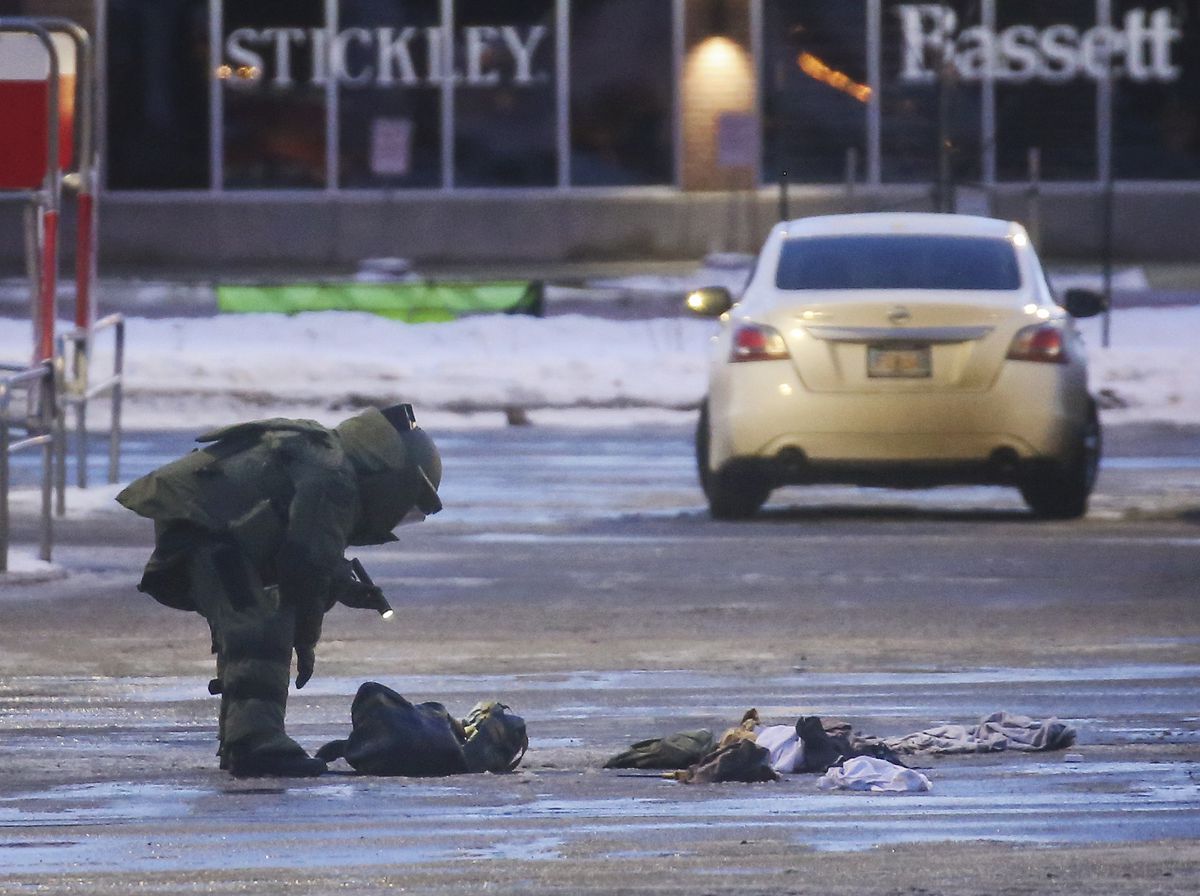 A man investigates items that a robot removed from a bag in a vehicle in the parking lot east of the Midtown Mall in Anchorage on Monday, Jan. 11, 2021. The surrounding area and roads remained closed until roughly 5 p.m. that night. (Emily Mesner / ADN)

A man investigates items that a robot removed from a bag in a vehicle in the parking lot east of the Midtown Mall in Anchorage on Monday, Jan. 11, 2021. The surrounding area and roads remained closed until roughly 5 p.m. that night. (Emily Mesner / ADN)

An hourslong FBI investigation into a “suspicious vehicle” parked outside the Midtown Mall on Monday in Anchorage was spurred on by threats a person made to federal buildings nearby, according to an agency spokeswoman.

Anchorage police said in an alert Monday evening that “nothing suspicious was found.” FBI spokeswoman Chloe Martin said the investigation was launched “in response to reports of an individual who made threats against federal buildings in the area.”

It wasn’t immediately clear whether law enforcement had taken a suspect into custody. Additional questions sent to the FBI on Monday evening were not immediately answered.

Early Monday afternoon as the investigation was underway, the FBI said there did not “immediately appear to be a public safety threat” though some of Alaska’s busiest roadways and access to a congested business district were blocked for hours while police deployed robots to inspect a parked Ford Explorer.

Caption
A pair of robots inspect the contents of a duffle bag after removing it from a suspicious vehicle parked at the Midtown Mall on Monday, Jan. 11, 2021. (Bill Roth / ADN)
Wait 1 second to continue.

Martin could not immediately confirm if the robots were used to check for explosive devices, but said in a statement Monday evening that FBI Special Agents had conducted a threat assessment on the vehicle and determined it not to be dangerous.

Police initially warned about a law enforcement presence in the parking lot east of the Midtown Mall around 11:30 a.m. Monday.

About an hour later, police had shut down busy traffic arteries including Northern Lights and Benson boulevards, between Latouche and Denali streets. The New Seward Highway was closed in both directions between 36th Avenue and Fireweed Lane.

The roadways did not reopen until about 5 p.m.

The FBI was in charge of the investigation and Anchorage Police Department officers were assisting, APD spokesman MJ Thim said.

Police through the day also blocked access to parking lots in the vicinity, including those at “Fred Meyer, Walgreens, Qdoba, Subway, and others in that immediate area.”

Roughly 35 people, including two customers, were told to take shelter in the back of the Midtown Carrs around 11:15 a.m., said Tim Severson, a store employee. Businesses on the other side of the mall had not been evacuated by about 12:30 p.m., said John Sagaco, who works for the mall’s security team.

As of about 2:45 p.m., law enforcement at the scene appeared to have deployed robots inside the Ford Explorer, parked facing south in a spot east of the entrances of Nordstrom Rack and Guitar Center. The robotic probes rifled through the vehicle for hours and could be seen pulling a bag and what appeared to be clothing from the SUV.

Just before 5 p.m., a person donning protective gear sorted through items extracted by the robot and looked through the vehicle.

Law enforcement was still examining the vehicle when roads reopened. Entrances to the mall remained blocked at that time.

Police said the parking lot where the Ford Explorer was located — on the eastern side of the Midtown Mall — would remain closed to the public as the investigation continued.