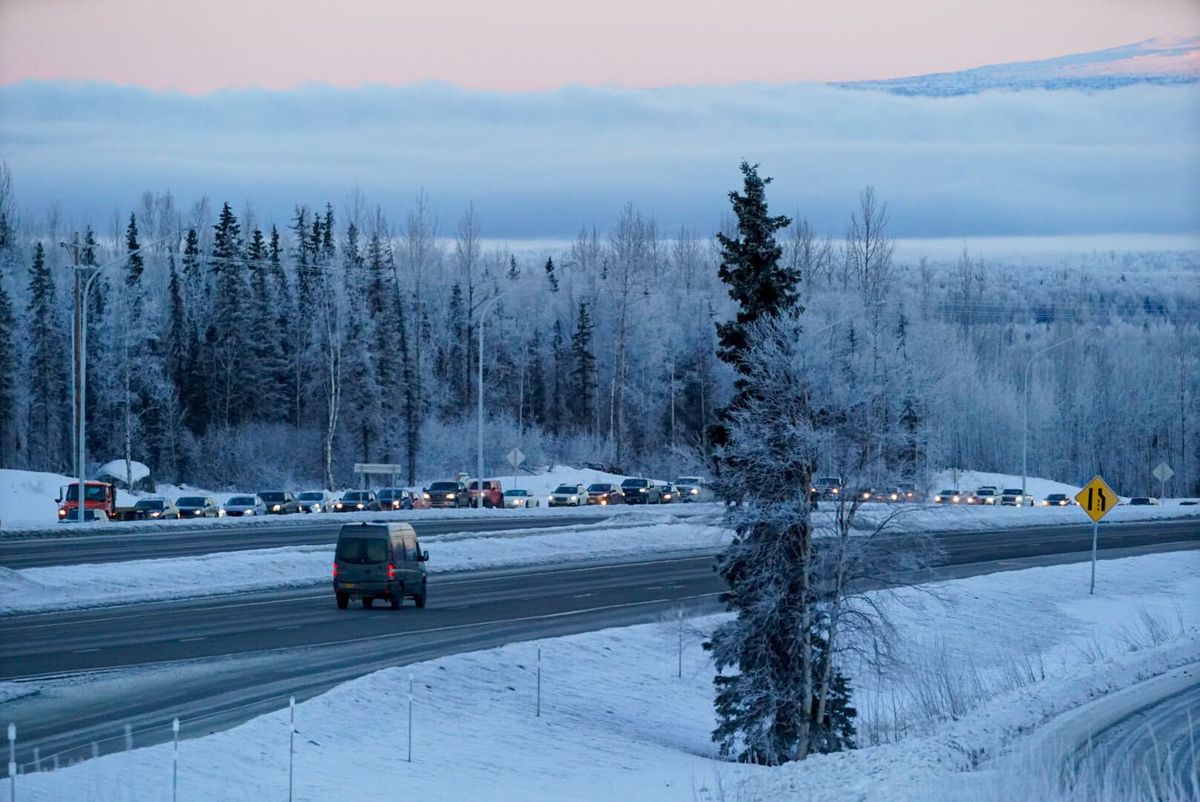 Traffic was backed up on the southbound frontage road between the south Eagle River and Hiland Road exits on the Glenn Highway on Jan. 2 while Anchorage police conducted a death investigation. (Loren Holmes / ADN archive)

Traffic was backed up on the southbound frontage road between the south Eagle River and Hiland Road exits on the Glenn Highway on Jan. 2 while Anchorage police conducted a death investigation. (Loren Holmes / ADN archive)

A 25-year-old man is now facing a charge of second-degree murder after he stranded his friend alongside the Glenn Highway in frigid weather before returning and hitting him with his car earlier this month, according to court documents.

Brian McGee was charged last week with an aggravated count of failure to render aid and has since been held at the Anchorage Correctional Complex. On Tuesday, police said he was served an arrest warrant on the new charge.

On Jan. 2, McGee had picked up his friend, 26-year-old Chase Bowerson, from his home in Chugiak and headed to an Eagle River bar, according to a criminal complaint filed by Anchorage police detective Jeff Bell. When the bar closed, the two men headed to Wasilla in McGee’s Ford Taurus to continue drinking, the charging document said.

Although McGee initially denied drinking, Bell wrote in the charging document that McGee was seen on surveillance video consuming at least seven drinks. After leaving Wasilla, McGee drove toward Anchorage but eventually turned around so he could drop Bowerson off at home, the charges said.

“Brian McGee stated that Bowerson became belligerent and attacked Brian McGee as he drove down the Glenn Highway,” the charges said.

McGee told officers he stopped alongside the highway and “baited” Bowerson out of the vehicle before speeding away, the detective wrote in the complaint. McGee headed to Bowerson’s home and left his belongings on his doorstep, according to the court documents.

Meanwhile, Bowerson was wearing only a T-shirt and jeans in temperatures hovering around minus 8 degrees along the highway, the charges said. Police received several reports starting around 3:48 a.m. Saturday describing a man walking along the roadway, according to a charging document filed against McGee last week. Police responded that morning and saw footprints along the highway but were unable to locate a person, according to charging documents.

Police were called back to the highway near the Hiland exit around 8:40 a.m. for a report of a body on the shoulder of the far left southbound lane against the median, according to the charges. McGee’s license plate and several other car parts were also at the crash, the detective wrote.

During the investigation, traffic fatality investigators determined that McGee had swerved sharply toward Bowerson and struck him while driving about 65 mph, Bell wrote.

When officers arrived at McGee’s house that morning, they noted extensive damage to his silver Taurus, the charges said.

During an interview, McGee told investigators he thought he’d hit a moose, the charges said. He also conceded that he feared he may have hit a person and said he “didn’t see him until it was too late,” according to the charges. Instead of stopping, McGee continued 14 more miles to his home, police said in the complaint.

At the time, police said additional charges were possible. In the second-degree murder charge filed Tuesday, police said McGee knowingly swerved toward Bowerson “after consuming alcohol and having an altercation with him.”

McGee is scheduled to appear in court Thursday morning.