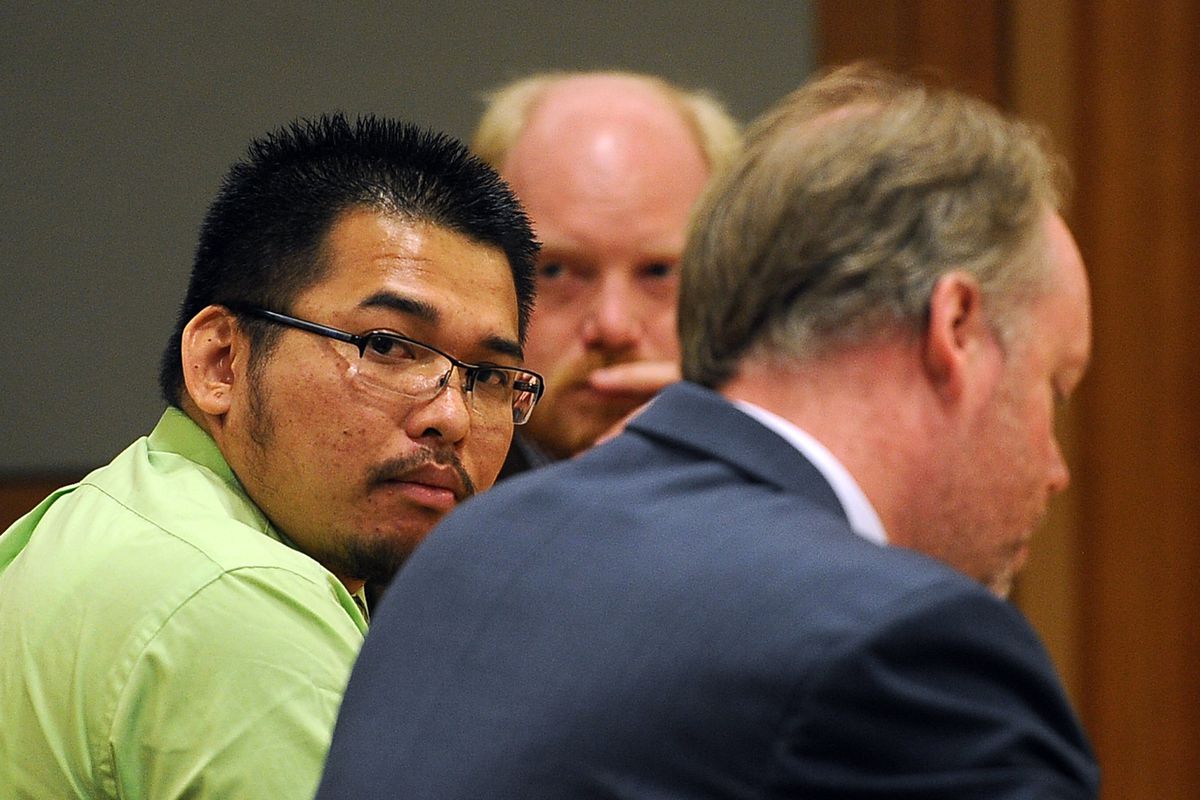 Korakanh Phornsavanh looked around the courtroom before an Anchorage jury found 28-year-old guilty on first- and second-degree murder charges for shooting Said Beshirov, 27, to death outside the Platinum Jaxx bar on Oct. 28, 2012.

Korakanh Phornsavanh looked around the courtroom before an Anchorage jury found 28-year-old guilty on first- and second-degree murder charges for shooting Said Beshirov, 27, to death outside the Platinum Jaxx bar on Oct. 28, 2012.

An Anchorage judge must weigh a new trial for a man convicted of a fatal shooting in a street brawl outside the Platinum Jaxx club in 2012, under a long-awaited state appeals court decision.

The shooting occurred during a Halloween party at the now-defunct nightclub. Evidence was complicated by alcohol — the brawl occurred at 2:30 a.m. after bar break — as well as costumes worn by bargoers and numerous conflicting witness statements.

A jury in 2015 convicted Korakanh Phornsavanh, now 33, of of first-degree murder for fatally shooting 27-year-old Said Beshirov. He was sentenced to serve 45 years in prison.

The verdict came after a monthlong, high-profile trial in Anchorage Superior Court Judge Michael Wolverton’s courtroom. Police originally considered another person involved in the brawl to be the main suspect. At the time of the incident, no eyewitnesses described Phornsavanh as the shooter.

Phornsavanh’s public defender appealed the decision five years ago. It’s not clear why the court’s ruling took so long.

The January 2016 appeal was based on three claims: Wolverton didn’t provide appropriate instruction on eyewitness identification; the judge should have granted a motion for a new trial because the verdict wasn’t supported by the evidence; and that Wolverton “failed to apply the correct legal standard” when he evaluated the motion for a new trial.

The three-judge Alaska Court of Appeals last week handed down an opinion that rejected the first two claims but agreed with the last.

“Accordingly, we remand this case to the Superior Court for reconsideration of Phornsavanh’s motion for a new trial under the correct legal standard,” states the opinion, written by Chief Judge Marjorie Allard.

Daniel Lowery, the public defender who represented Phornsavanh, said in an email he couldn’t comment on any specifics but said he was “gratified” the appeals court agreed his client “should be given an opportunity to argue why he deserves a new trial, and I look forward to making that argument on his behalf.”

Prosecutors declined to comment until the judge makes a decision.

The appeals court wants Wolverton, who retired last year, to return his findings for review within 90 days, according to the opinion. It’s possible the judge could decide whether to hold a new trial without holding more hearings.

Phornsavanh will remain in prison. Alaska law requires anyone convicted of first-degree murder remain in custody while an appeal is pending.

The appeals judges faulted Wolverton’s reluctance to apply his own discretion to the decision about a new trial, saying that’s what a judge in that situation needs to do to “prevent injustice.”

Wolverton acknowledged in his order rejecting the new trial motion that he needed to assess the evidence and witness credibility without deferring to the jury’s view, the opinion states. But in his analysis of a new trial, Wolverton “repeatedly referred to an abstract ‘fact-finder’ and what the fact-finder could ‘reasonably infer’ from the evidence.”

The judge also wrote in a footnote that if he was deciding the case instead of a jury, the opinion states, he “might well have not found that the state had proven its case beyond a reasonable doubt” -- the standard for a criminal conviction.

Wolverton did not expand on the footnote, and at sentencing was “adamant” that he wanted “to make it clear (his) personal opinion has never been expressed and will not be,” the appeals judges found.

In the opinion, the judges also took the step of disavowing any prior appeals cases that erroneously confused the separate legal standards for trial judges and appeals judges when deciding retrial motions. Appeals judges have to find the evidence “so slight and unconvincing as to make the verdict plainly unreasonable and unjust.”

Because it’s possible Wolverton relied on that earlier interpretation, the appeals court can’t determine what he would have ruled had he understood “the singular importance” of his role “in independently assessing the motion for a new trial in the interest of justice.”

So, Allard wrote, “the reconsideration of Phornsavanh’s motion for a new trial under the correct legal standard is required.”