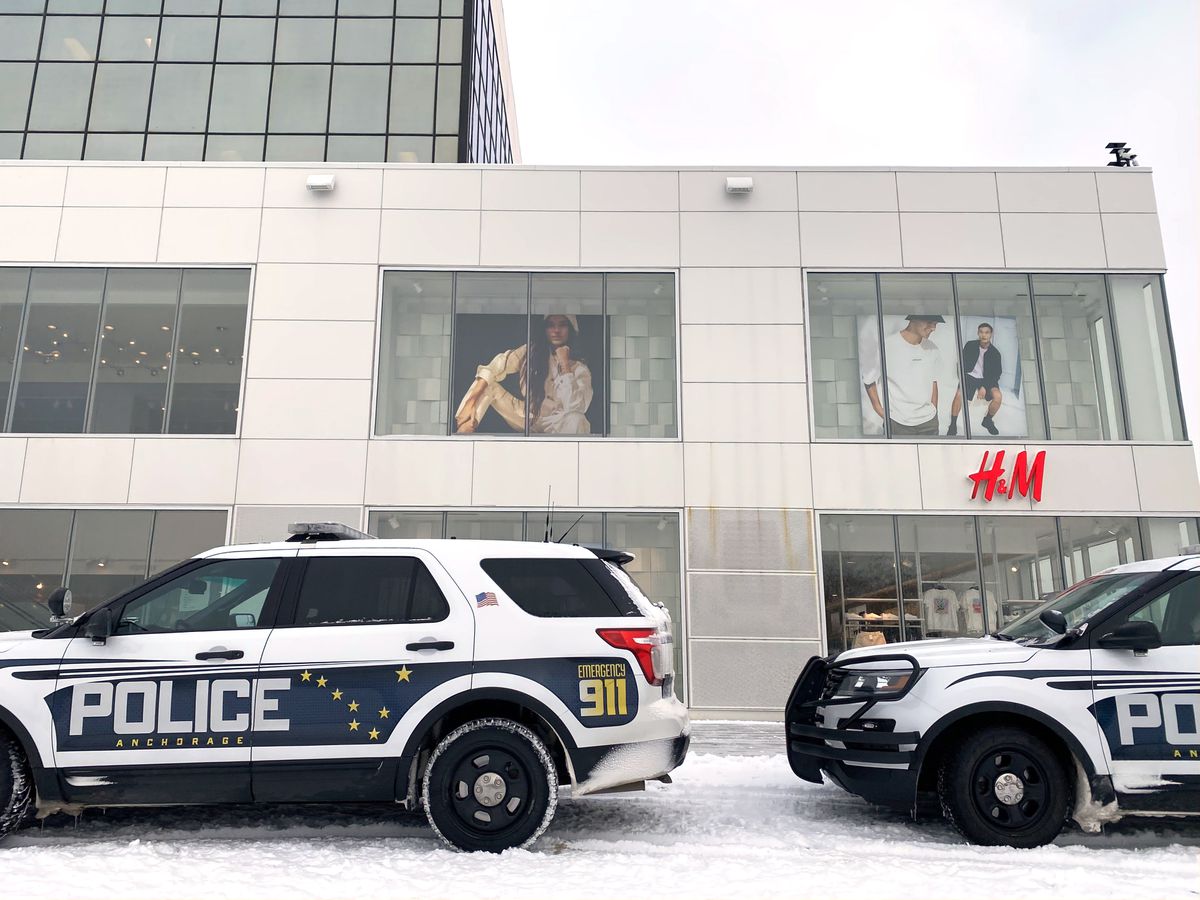 Anchorage police respond to a bomb threat at the Dimond Center on Tuesday. (Loren Holmes / ADN)

Anchorage police respond to a bomb threat at the Dimond Center on Tuesday. (Loren Holmes / ADN)

Anchorage police say they found nothing suspicious during an investigation of bomb threats at the Dimond Center and Midtown Mall on Tuesday morning.

This is the second time in as many months that the Midtown Mall has endured a safety threat.

Police had responded to the malls Tuesday morning and a bomb disposal trailer was seen at the Dimond Center parking lot, but law enforcement began to clear the area by 11:30 a.m. The Anchorage Police Department investigated the threats with assistance from the FBI.

The threat regarding Dimond Center was called in to police and law enforcement arrived at the mall around 10:30 a.m., general manager Bob Dye said. Police issued an alert just before 11 a.m. asking the public to avoid the area around both malls as they investigated.

The Dimond Center did not ask customers or stores to immediately evacuate, and Dye said he was told it would not be necessary unless something suspicious was found. Some of the stores did evacuate and temporarily close down during the incident due to corporate policies, he said.

Dye said he expected all stores to reopen shortly after police cleared out.

“The person later called back and told police that they gave the wrong location and that the bomb was actually at the Midtown Mall,” she said over email. “The FBI and APD did not find either threat credible, but they did a full sweep of both malls to be sure.”

Gail Gurke, manager at the Hallmark Gold Crown store in the Midtown Mall, said investigators indicated they were looking for something inside a Valentine’s Day teddy bear when they searched the store Tuesday morning.

Gurke was also working last month when a bomb threat closed the Midtown Mall and some of Alaska’s busiest streets for hours. The store closed early that day and Gurke said she was able to leave the mall.

In that incident, several robots searched a car in the parking lot for hours but did not find anything suspicious. FBI spokeswoman Chloe Martin said the January incident did not result in an arrest.

The threats at the Midtown Mall left Gurke feeling confused and alarmed, she said.

“It’s really a shame that our police officers, FBI and everybody has to waste their time on stuff like this,” Gurke said. “But now we’re back to business as usual and I’m just hoping the third time is not the charm. I wish they would find out who’s doing this stuff.”

The bomb threat in January was an isolated incident and unrelated to Tuesday’s threat, Martin said.

Last month, the Dimond Center temporarily closed after it was listed online as the location for an armed protest in the weeks following the deadly uprising at the U.S. Capitol by a violent group of pro-Trump rioters. Online reports showed that organizers confused the mall with Juneau’s Dimond Courthouse, and no protesters showed up at the Dimond Center the day of the scheduled protest. Dye said he does not believe the threat made Tuesday is related.

It was not immediately clear whether police had identified a suspect in Tuesday’s threats, but spokeswoman Renee Oistad said no charges had been filed by about 2 p.m.