A Bethel woman reported she was raped. After months of delays in the case, she publicly protested inaction by police and prosecutors. 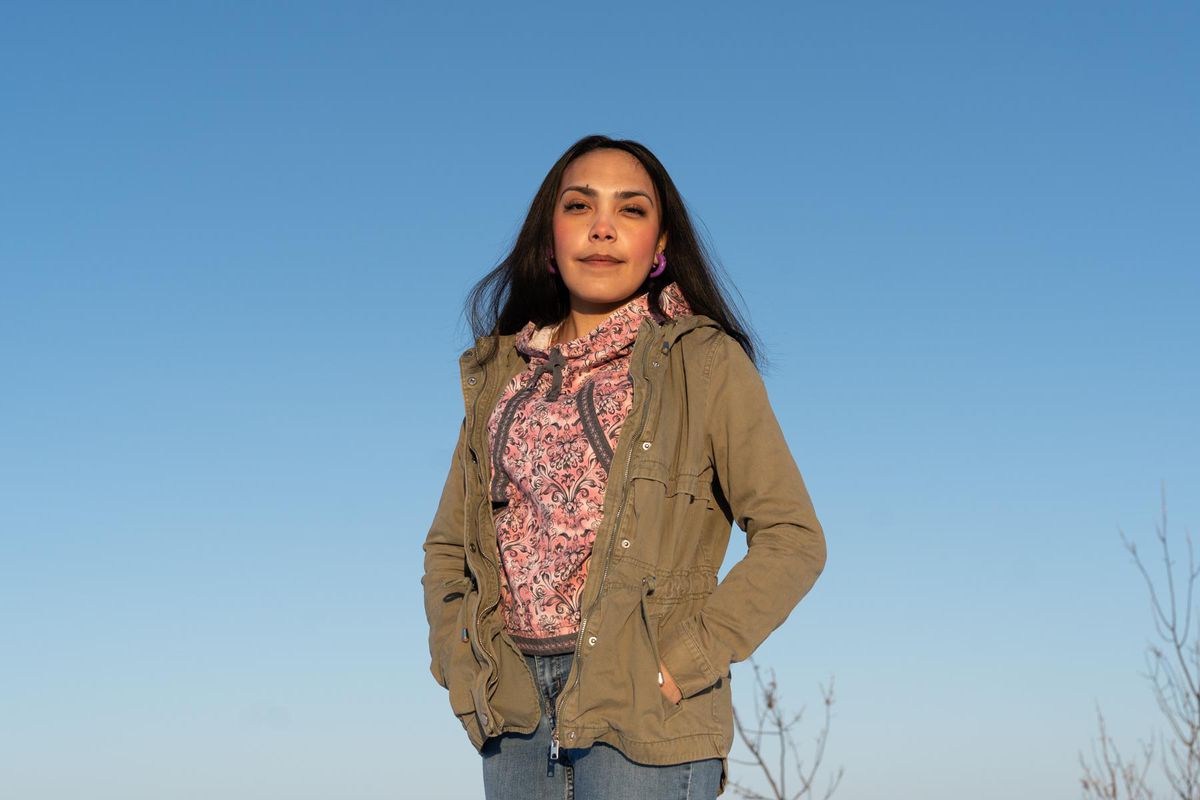 Juanita Nick of Bethel has waited months for the investigation into her rape case to move forward, and she doesn't want this to happen to anyone else. (Katie Basile / KYUK)

Juanita Nick of Bethel has waited months for the investigation into her rape case to move forward, and she doesn't want this to happen to anyone else. (Katie Basile / KYUK)

This article was first published at KYUK.org and is republished here with permission.

BETHEL -- On March 4, a Bethel woman protested outside the Bethel courthouse. She said she was raped and wanted to draw attention to what she claimed was the criminal justice system’s slow response in investigating her case.

Days after that protest, the woman said, she received a call from Bethel’s district attorney’s office saying that her case would be looked into. The protest has ignited community dialogue on how local rape cases are handled, and if victims are receiving timely justice.

“I was assaulted and raped in Bethel, Alaska. I survived,” said Juanita Nick in a recording that she sent to KYUK. “My case wasn’t handled appropriately by Bethel Police Department, and I don’t ever want this kind of situation to ever happen to anyone.”

Nick said her assault occurred the night of Dec. 18. Screenshots from her phone show that she called Bethel police the following morning at 3:41 a.m. to report that she had been raped. Five hours passed and police did not respond to her call, so she called again, and again at 10:06 a.m.

Nick said Bethel police arrived more than seven hours after she first called. She said she was told that the reason for their delay was because there hadn’t been an officer available. In October 2020, Bethel Police Chief Richard Simmons stated that his department was understaffed for the number of calls they receive.

Simmons declined to say what time an officer responded to Nick’s call. He wrote in an email to KYUK that “answering these questions, even if it is because of the victim’s own comments, violates her right to privacy and impacts the impartiality of the trial.”

“They are certainly hiding behind the guise of protecting the victim,” Nick said. “They know the case was not handled appropriately.”

Nick said that Bethel police continued to delay their response to her sexual assault case. After her initial report, she started asking police for updates.

“At one point, when speaking to an officer, he asked me if my rape kit had been picked up by his department,” Nick said.

A rape kit, or sexual assault kit (SAK), is administered by a medical provider following a sexual assault to collect evidence from the victim, including DNA samples. Police generally then pick up the kit and submit it to a laboratory for analysis, which can then be used in court as evidence.

Nearly two weeks after the assault, Nick contacted her medical provider and learned that her rape kit had not been picked up by police. She said that her medical provider later informed her that Bethel police picked up her kit on Jan. 22, 34 days after it was administered. Asked to confirm when Bethel police submitted Nick’s rape kit to a laboratory for processing, Chief Simmons declined to comment.

State law requires law enforcement agencies to submit sexual assault kits to a crime lab within 30 days of collecting them. However, Alaska Department of Law spokesperson Maria Bahr said that no court has been asked to rule whether the law requires police to collect the kits from the medical providers within a certain timeframe. Three months before Nick’s alleged assault, on Aug. 20, the Bethel Police Department reported in an annual audit to the Alaska Department of Public Safety that it had zero sexual assault kits on-site that were over 30 days old.

Nick said that she believes her case may have been mishandled because relatives of her alleged rapist work in the Bethel Police Department. She said the officer who asked if his department had picked up her rape kit is related to her alleged rapist, and she is concerned that officer was in custody of her kit at some point. Simmons declined to say what policies Bethel police have to prevent officers from working on cases that involve family members.

Bethel City Manager Pete Williams said that the delay in picking up Nick’s sexual assault kit was due to lack of communication between Bethel police and the Yukon-Kuskokwim Health Corp., which administers the kits. He said Bethel’s Sexual Assault Response Team met March 18, and members of the police department and YKHC exchanged phone numbers and email addresses, which he said neither party had before the meeting.

YKHC spokesperson Mary Horgan declined to address Williams’ comments, but said that when the health corporation administers a sexual assault kit, it is ready for pickup within 24 hours. She said police can call YKHC’s Sexual Assault Response Team’s on-call phone number that is staffed 24 hours a day to arrange a pickup.

Williams added that another issue seemed to be the handoff process between Bethel police officers, some of whom work a two-weeks-on, two-weeks-off schedule. He said that it is easy for matters like Nick’s rape kit to fall through the cracks when an officer leaves for a two-week break. Simmons did not respond to KYUK’s questions about Williams’ comments.

Williams said as of March 19, he had not asked the police chief about a possible delayed response to Nick’s initial call to police, or about her claims that relatives of her alleged rapist were involved in handling her case.

At least one part of Nick’s complaint, the delayed processing of rape kits, is a longstanding problem statewide. In 2016, an audit conducted by the governor’s office and state troopers uncovered 3,800 rape kits across the state that were never submitted for processing. Alaska has since spent millions of dollars trying to get through the backlog, but over 800 kits remained unprocessed as of October 2020.

Nick, an Alaska Native woman in Bethel, is part of a group that faces some of the highest rates of sexual violence in the nation. Western Alaska has twice as many felony sex offenses as the statewide average, and Alaskans as a whole report four times more sexual assaults than the national rate. Alaska Native females are disproportionately the victims of this violence, making up 42% of the felony sex offense victims in the state while making up less than 8% of the state’s population.

Sexual assaults reported to police seldom get referred to prosecutors, and even fewer lead to a conviction.

In Alaska, if victims of a crime believe that their case has been mishandled, they can contact the state Office of Victims’ Rights. Director Taylor Winston said that her office can audit the work of police and prosecutors.

“We can’t force them to prosecute; they have full discretion. But we have had cases where we’ve gotten involved and said, ‘Here’s what we found is viable evidence,’ and they’ve gone ahead and charged the case,” Winston said.

Nick said that she didn’t know about the Office of Victims’ Rights until mid-March, but said that she plans to reach out to them about her case.

But before that, Nick took a different approach to ensuring that her case received justice. On March 3, she said that she called the district attorney’s office and was told that Bethel police had not referred her case to the DA. The next day, on March 4, 75 days after she said she was sexually assaulted, she protested outside of the DA’s office with a few friends and family members.

The group held signs and chanted phrases like “Don’t let rape kits collect dust,” “Arrest the rapist on the loose,” and “Her testimony counts too.” Nick said that she hoped to spur the criminal justice system to act on her case. She documented the protest on Facebook, writing that her alleged rapist continues to walk free and threaten her.

“I live in fear each day as I go to the store or post office that my rapist will hurt me,” Nick said.

Her protest worked. Six days after her demonstration, she said that she received a call from the DA’s office saying that her case would be looked into. Asked why Nick’s case had been delayed in prosecution and when Bethel police had referred her case to the DA’s office, a spokesperson for the Bethel District Attorney declined to comment, saying they wanted to avoid tainting the investigation or affecting the jury pool. KYUK has not been able to confirm whether the DA’s office has chosen to prosecute Nick’s case.

Nick’s decision to go public with her case has invigorated community dialogue about how sexual assault cases are handled. Her Facebook post documenting her experience has been shared more than 300 times. In the last Bethel City Council meeting, two members of the public spoke during the public comment section, criticizing the criminal justice system’s handling of her case.

“Hello world. This is 2021, and women are still fighting for their basic rights,” said Bethel resident Ruth Miller at the last council meeting. “Indigenous women are fighting for freedoms from forced sexual acts. Wake up. This has to stop.”

Nick’s protest has also drawn some backlash from community members. She said she received Facebook messages saying “Every victim is not a victim” and “Other things are going on in the world.”

But for Nick, her protest was about more than her own case.

“Since the protest, I have had other victims reach out to me and share their story,” Nick said. “I am standing up now because I believe victims should not be shamed. I believe all reported sexual assaults should be investigated.”

While Nick’s case has received attention following her protest, she said that she shouldn’t have had to share her traumas publicly to move her case forward. But now that she has, she hopes her case moving ahead will push others toward justice as well.