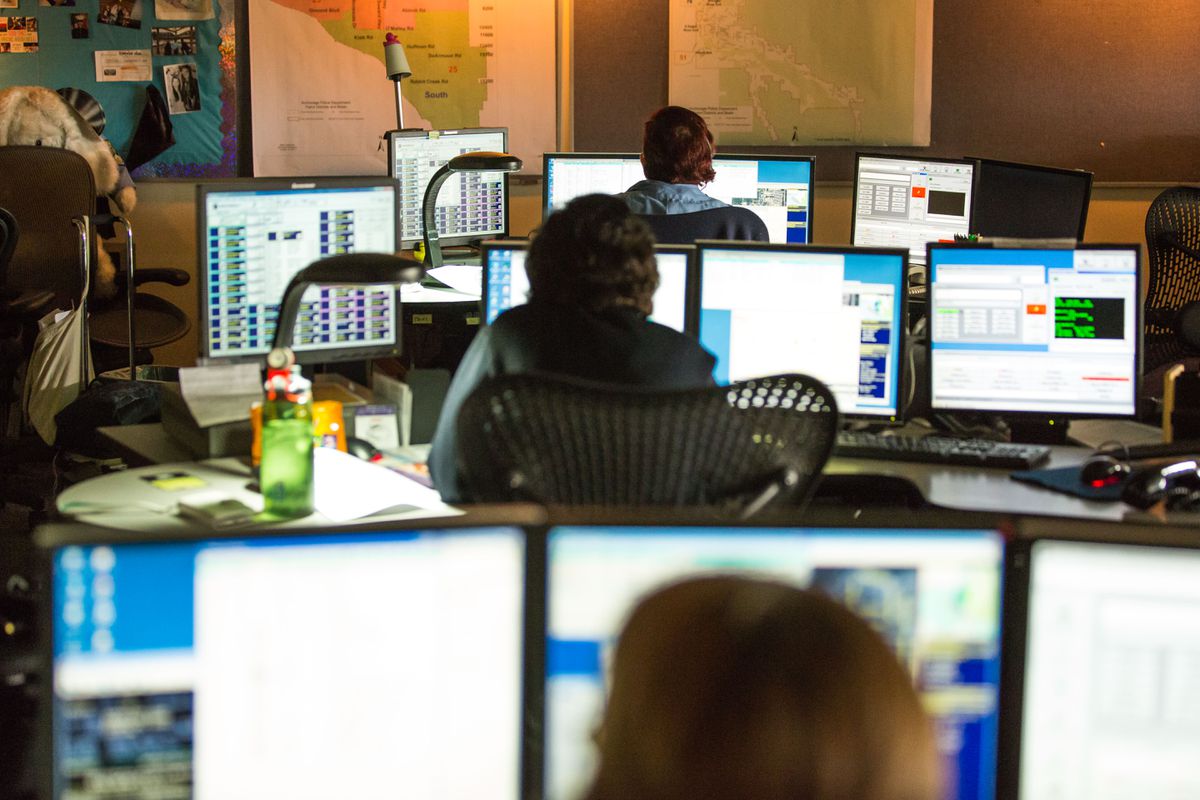 It now takes about half as much time for police dispatchers to answer 911 calls as it did during recent peaks just a couple years ago, officials with the Anchorage Police Department said this week.

Wait times began to rise after 2015 and peaked in late 2018 and mid-2019, when it took up to 21 seconds on average for dispatchers to answer incoming 911 calls, according to data provided by the department. The average wait time has steadily decreased since last summer and was about 8.6 seconds in February, according to APD.

“If you’re the citizen and someone’s having a heart attack in front of you, or your baby’s not breathing, or your house is on fire, you expect to call 911 and have a voice on the other end of the phone. ... The quicker we can answer the call, the quicker we get the help that people need,” said Amy Foraker, the department’s dispatch manager.

The department saw an influx of sworn law-enforcement officers in recent years when former Anchorage Mayor Ethan Berkowitz infused additional funding for the department in response to a rising crime rate in 2016. But the influx of officers did not immediately translate to additional support staff.

While the city was experiencing increased levels of crime, like a surge in car thefts that gripped the city from 2016 until 2018, more calls were also coming in, Anchorage Police Chief Justin Doll said in a phone interview.

The heavier workload coincided with several planned retirements, and Foraker said that employees in the dispatch center were frequently working overtime, which was leading to burnout and decreased morale.

The training process for dispatch employees is lengthy, she said, which meant there wasn’t a quick fix. Employees generally undergo about 10 to 12 months of training, she said.

“It’s a stressful job. ... It takes a really special skill set to be able to be compassionate but also handle it with the urgency that it needs to be handled with, but then being able to set that aside and move on to the next call,” Foraker said. “A lot of times, we’re talking to people on what could potentially be the worst day of their life.”

The department launched a 311 line in 2018 for non-emergency calls, which Foraker said also helped dispatch operators prioritize emergency calls and improve 911 wait times. APD doesn’t track the average wait time for 311 calls because it varies widely depending on what other calls are being handled and how long dispatchers need to remain on those calls.

The Anchorage Assembly has added more funding to the department budget over the past three years to increase support staffing, Foraker said. There were 42 dispatch employees in 2018 compared to 50 this year, the department said. Six positions are still open. The increase in staffing has significantly reduced the amount of overtime hours that dispatch employees are working, Doll said.

The department aims to keep the wait time for 911 calls under 10 seconds, and both Foraker and Doll said they anticipate additional staffing will help maintain the trend going forward.