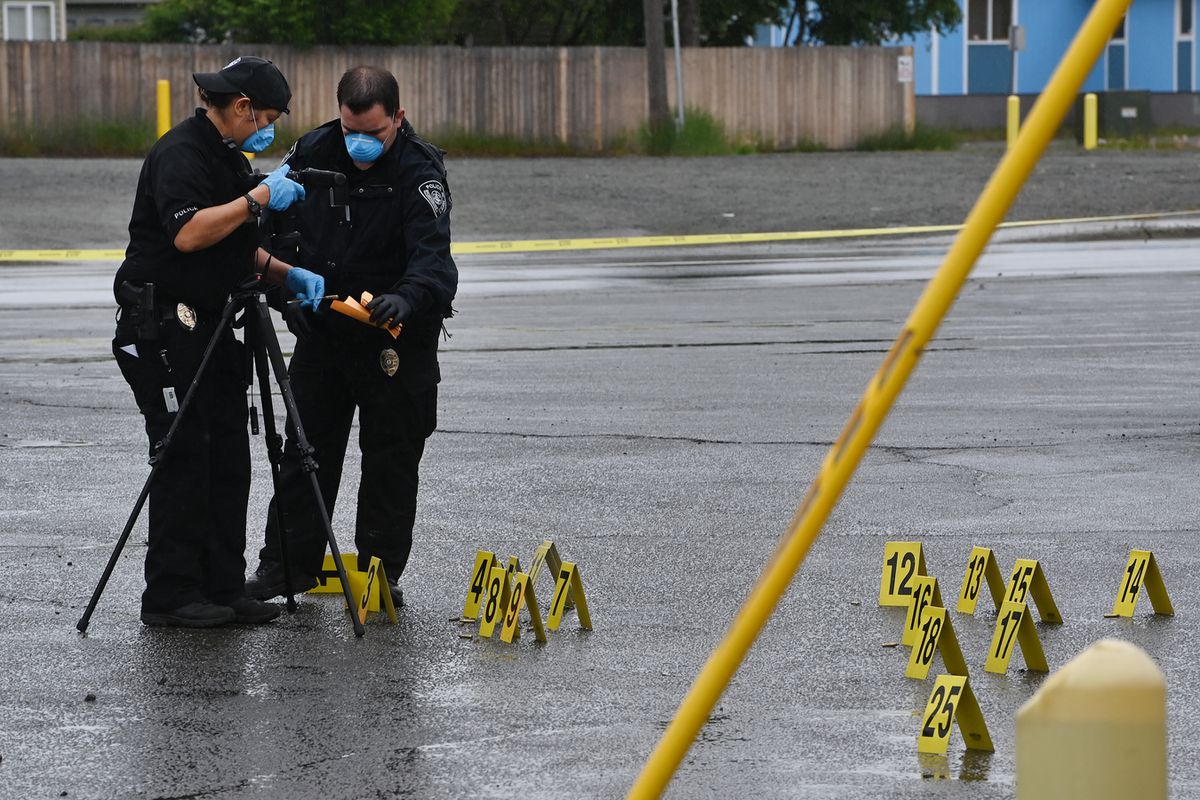 Update, 8:30 p.m. Sunday: This story has been updated with a new article.

Update, 11:30 a.m. Sunday: Anchorage police identified the woman who died after being shot early Saturday as 37-year-old Jaclyn Welcome, the department said in an updated alert.

Update, 11:50 p.m. Saturday: A 21-year-old man has been taken into custody after a Saturday morning shooting near downtown Anchorage left one woman dead and four others critically injured, police said in an alert.

Police said homicide detectives identified Herring as a suspect “through the course of the investigation.” He was taken into custody and taken to jail after detectives questioned him, according to police.

Police did not provide further details about the shooting or an update on the condition of the victims in the alert.

A woman died and four people were critically injured after an early Saturday morning shooting near downtown Anchorage, police said.

It remains unclear whether the five people — including two women and three men — were specifically targeted or “caught in the crossfire,” Anchorage Police Chief Kenneth McCoy told reporters Saturday afternoon in the parking lot at Northway Mall.

No arrests have been made so far.

Police are still trying to determine the motive behind the shooting, which occurred in an area where a large group of people had gathered near Fourth Avenue and Gambell Street, McCoy said.

“What we know at this point is there were two vehicles with individuals who had some sort of altercation,” McCoy said. “Shots were fired and multiple people were injured.”

Officers arrived at the scene around 2:45 a.m. and found two women and three men shot, police said in a 3:45 a.m. alert. One of the women was declared dead at a hospital, police said.

As of midday Saturday, a heavy police presence continued to occupy several blocks in the area, where officers had put up crime scene tape and were gathering statements from witnesses. A vehicle used for crime scene investigation was on Gambell between Fourth Avenue and Fifth Avenue.

When asked whether police had any suspects or could provide details about the weapon or weapons involved, McCoy said the investigation was still in its early stages. Police are investigating whether shots came from multiple vehicles, he said.

McCoy noted that the shooting marked Anchorage’s ninth homicide of the year.

He urged anyone with information about the shooting to call police at 311.

Gambell Street had reopened open by 3:30 p.m. An hour and a half later, people began gathering in The Raven parking lot on the corner of Gambell and Fourth Avenue, across the street from where the shooting appeared to have occurred. Just hours before, part of the bar’s parking lot was blocked off with police tape.

Rob Cupples — owner of Cupples Cottages Vacation Rentals and a member of Third Avenue Radicals, a group focused on revitalizing east downtown — told the crowd at the summer block party that the planning committee spoke Saturday morning about whether to go forward with the event.

There was a moment of silence at the event to recognize the victims of the shooting.