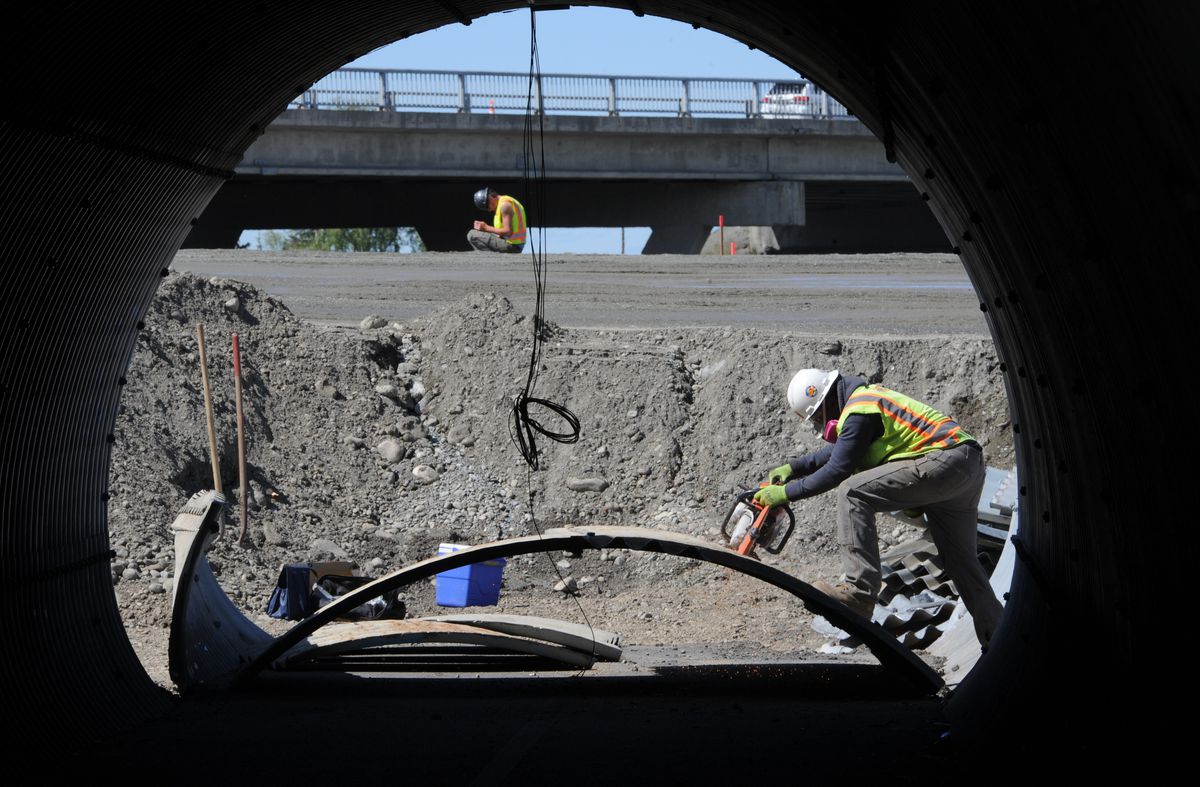 Until this year, Roger Hickel's construction company had never strayed from Alaska.

The firm put up the police station in Kodiak, the first Wal-Mart on the Kenai Peninsula, the Glenn Massay Theater in Palmer and many other buildings throughout the state since 1995.

But this spring, with cuts to the state's capital budget curtailing public building projects and low oil prices deterring industry activity, Roger Hickel Contracting bid on jobs outside Alaska for the first time in 21 years.

There just aren't enough projects cropping up in Alaska anymore. At the same time, construction is picking up in other parts of the U.S. and industry labor shortages are a problem across the country.

Hickel told his employees layoffs could begin in the latter part of 2016 and early 2017 unless some were willing to relocate to the Pacific Northwest. Now the company has a temporary satellite office in Bellevue, Washington, and has bid on three public school construction projects in Washington state. The main office remains in Anchorage.

"I've always said, 'We'll specialize in Alaska. We're not going to leave Alaska. We work all over the state and that's our business plan,' " said Hickel, the Kansas-born-and-raised nephew of former Alaska governor and real estate developer Wally Hickel. "There's greater risk when a company tries to enter a new working environment, but we've got to look at other places."

Commercial and institutional builders in Alaska — those who erect schools, office buildings, malls and warehouses — are highly sensitive to state government spending and the capital budget in particular, which funds items including new construction or repairs to existing buildings, utilities and vehicles.

Alaska's capital budget plummeted from a recent high of $2.1 billion in fiscal year 2013 to $113 million in 2016. In real dollars, capital spending has not been this low since the 1978 budget year.

Oil prices, the crux of Alaska's economic problem, appear to be recovering somewhat, but not enough for the oil and gas industry to reverse layoff decisions made in recent months or ratchet up exploration and development, another major source of construction jobs.

Overall, construction employment has fallen each month, year-on-year, since September 2015, according to the state Department of Labor. Preliminary numbers from April show 15,400 jobs that month, or 1,500 fewer than the same month the year before.

"In the building side of the market, we have a much greater capacity to build than there are projects," said John MacKinnon, executive director of The Associated General Contractors of Alaska, a trade association that represents the commercial side of the construction industry. "What we're seeing is uncertainty in the economy and when there is, investors pull back."

MacKinnon said hours worked in the commercial building trade on a statewide basis appear to be down about 20 percent from last year.

"It's not just about state spending. When the state pulls back, that sends a negative signal to private investors," he said. "Right now people are sitting on the sidelines waiting for the Legislature to do something."

State lawmakers are wrangling over a plan to reduce Alaska's $4 billion deficit.

Aside from diversifying geographically, some firms that typically focus on commercial and institutional buildings are bidding more aggressively on road projects. An influx of hundreds of millions of dollars in federal highway funds to the state's capital transportation improvement budget is keeping that sector in relative good health, said Jill Reese, a spokeswoman for the state Department of Transportation and Public Facilities.

The heavier competition is obvious to Sharon Smith, chief of contracts for the department's central region.

Smith noted that at least two firms known for their work in "vertical" construction have bid successfully on recent "horizontal" projects.

Neeser Construction won the $41 million contract to improve the Glenn Highway and Muldoon Road interchange in Anchorage, while Davis Constructors & Engineers, one of the state's largest contractors, picked up a $2.4 million job to improve Olympic Mountain Loop in Girdwood.

"The whole bidding climate, it's very competitive right now, with lots of bidders," Smith said. "For the highway projects, we've been seeing the majority be very competitive with consistent bids below the (state) engineer's estimates. It's been kind of noteworthy."

A project to shift the Glenn Highway at Mile 49 away from an eroding bluff attracted a whopping 13 bids from large and smaller contractors, all of which came in below the state engineer's estimate of $3.6 million. The state awarded the project to Granite Construction, which bid the project at $2.8 million.

"It's a sign of a competitive market when you have big and small contractors in the mix going after a smaller job like that," MacKinnon said.

The state and local governments are benefiting from lowered project prices, said Paul Light, superintendent at Western Construction and Equipment, an Anchorage company that builds and maintains roads and parking lots.