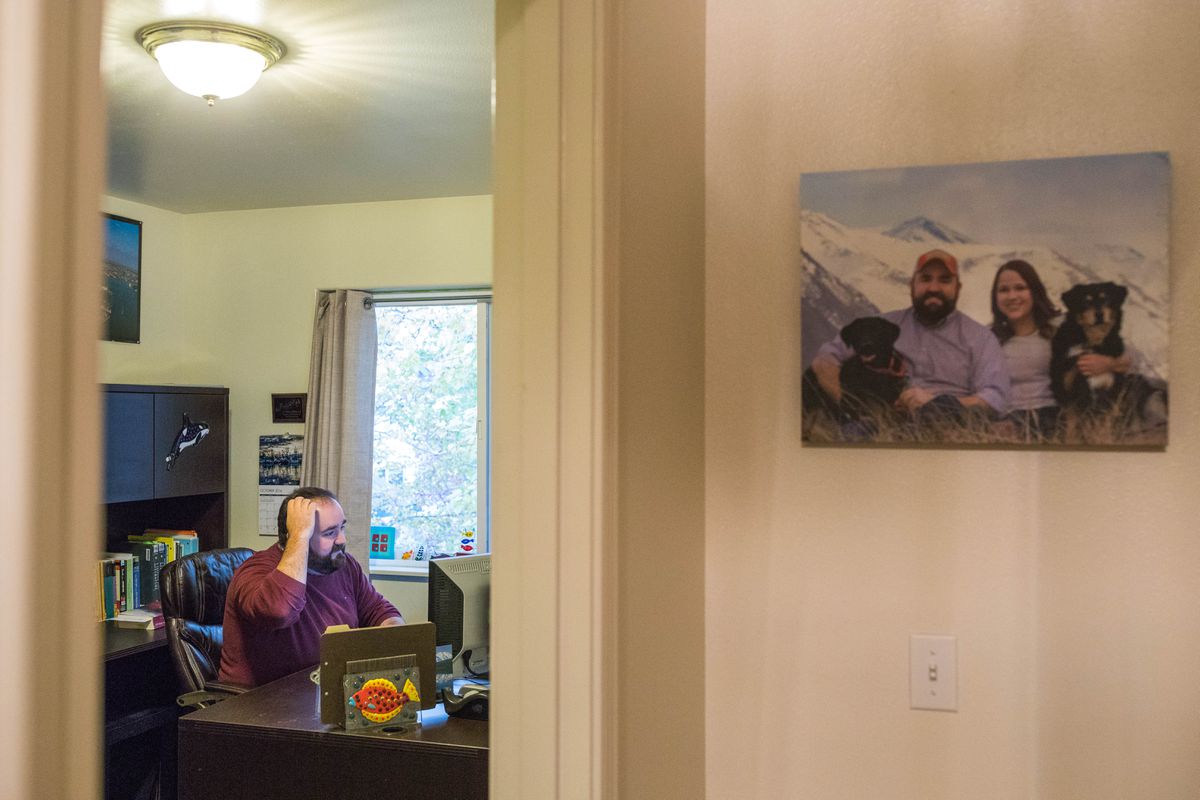 Tim Shumway teaches high school classes from the second floor of his Anchorage home, where he has three computer screens set up on his desk so he can talk to his students, who sit in three separate classrooms, all more than 100 miles away.

Around 8:50 a.m. on Tuesday, live video footage from each of the three schools within the Copper River School District popped up on one of Shumway's computers. Some of the students called out, "Hi, Mr. Shumway." Shumway took attendance and class began.

No teacher was standing in front of a whiteboard. No books lay open on students' desks. That day, everything happened over the computer — from note taking to tests to readings.

As part of the district's high school schedule, Shumway holds world literature class for four weeks; then his students take a two-week break, which they spend in hands-on elective courses, like coding and welding, before returning to the core classes for another four-week cycle.

The untraditional schedule and increased reliance on technology are part of the Copper River School District's strategy to counter declining enrollment, said school district Superintendent Tamara Van Wyhe. In the past decade, the district's student population has shrunk by about 22 percent, and the district has closed three of its six brick-and-mortar schools, according to state data. But at the same time, Van Wyhe said, the district has drastically increased its number of online classes and, last year, overhauled its high school schedule.

It's trying to do more with less — grappling with the effects of shrinking enrollment, like many other rural school districts.

"We're trying to provide all those same opportunities in a different way," Shumway said from his tidy home office. "It's all about will. It's about looking at this as an opportunity to innovate rather than as a challenge that is going to destroy us."

The Copper River School District refers to its revamped high school schedule as a rotation between "basecamp" and "trek." Van Wyhe said she hopes other Alaska districts will embrace a similar rotation. That way, Copper River could use videoconferencing to connect its small-sized classes with others across the state, allowing the districts to share highly qualified teachers and increase their course offerings, she said.

"We want to expand the reach of really amazing teachers, like Tim," she said.

Using online resources to expand class offerings isn't new in Alaska. For years, districts have contracted with vendors to buy courses, as well as employing their own teachers to hold classes online, said Cecilia Miller, an education specialist at the Alaska Department of Education and Early Development.

Miller said the effectiveness of online classes largely hinges on the teacher. Research, she said, has also shown that it's critical to have a staff member on site monitoring students, to ensure they're keeping up with their online classes.

"As long as it's done well, it's effective," Miller said.

"It was very intentional," she said. "We started with the understanding that our kids don't have the same opportunities that kids in large schools have."

Of the district's 133 high school students, 104 are enrolled in at least one online class this school year, Van Wyhe said.

This school year, high school students can choose from about 350 classes that are strictly online and more than a dozen other classes offered over videoconferencing, where a teacher uses two-way video to teach at multiple schools.

The district employs eight full-time high school teachers, one of them a special education teacher. It's not nearly enough staff to offer all of the varying levels of classes students need without tapping into technology, Van Wyhe said. All of the teachers except Shumway work out of a Copper River school where they can also use videoconferencing to connect with the other schools.

On Tuesday, Shumway lectured from Anchorage on the elements of a story, including motif and theme, as a PowerPoint presentation played on his left computer screen — and on students' computers in Glennallen, Kenny Lake and Slana. Students raised their hands if they had a question, and their classrooms were displayed on Shumway's center computer. Teacher aides stationed in the three classrooms also monitored the students, Shumway said.

On the computer screen farthest to his right, Shumway accessed platforms through Google, including email where he said students would occasionally send him questions about parts of the lesson they didn't understand. He could also open up each student's notes and watch as they typed online.

"The thing that has really changed is the fact that things are happening more in real time," Shumway said. "I'm constantly responding to everybody."

Shumway asked his students to pull up on their computers the day's reading, a short story by a French author. He had them read it in groups at their respective schools. Throughout the text, Shumway had inserted multiple questions. Students could not continue reading the text until they submitted their answers.

The answers, once sent, appeared on one of Shumway's computer screens, Shumway graded each response and sent messages to the students about what they did well and how they could have improved their answers. Shumway then pulled up another window, which displayed how long each student had spent on the story text. A few students, he said, must have started reading during his lecture.

Tuesday marked the first day back to "basecamp" for Shumway's class — the weeks set aside for high school students to focus on their core classes. The district's high school students had spent the previous two weeks in their elective "trek" classes, as had Shumway, who had traveled to Glennallen.

He taught a 21st century communication class and a humanities class there. The district's high school students got to choose from a list of elective classes, including robotics, personal finance, aluminum fabrication and ground school — most taught in Glennallen.

To get to those Glennallen classes, the school district buses students from Slana and Kenny Lake each day. For students in Slana, it takes about three hours to get there and back.

The district hopes to create some sort of on-site housing in Glennallen so students can stay for the week and return home on the weekends, said Van Wyhe.

She said the district does not yet have data to show whether the new high school schedule has been successful. But she has heard positive comments from students who said they looked forward to spending two weeks on classes they had chosen to take.

She said that 96 percent of the district's students who took an online class last school year completed and passed the course. Van Wyhe said she did not immediately have pass rates for students who took classes delivered through videoconferencing.

When it comes to funding, Van Wyhe said the district isn't saving money with its new schedule or its increase of online classes; it's simply "spending our state funding to educate students," she said.

The district has received grants to, in part, help pay for the new technology. It has had to up its internet bandwidth over the past two years from 15 megabytes to 100 megabytes, at an annual cost of $33,264, discounted due to a federal program.

She said the online courses rarely fall offline. And by far, she said, the biggest challenge the district has come up against as it rethinks how it's delivering education is explaining the changes to the community, and to parents.

"There's just always that kind of refrain that you hear: 'Well we've always done school this way; why would we do this differently? This is an experiment I don't want you to experiment with my child,' " she said. "So we're helping people to understand that it's OK to think differently and it's OK to be innovating."