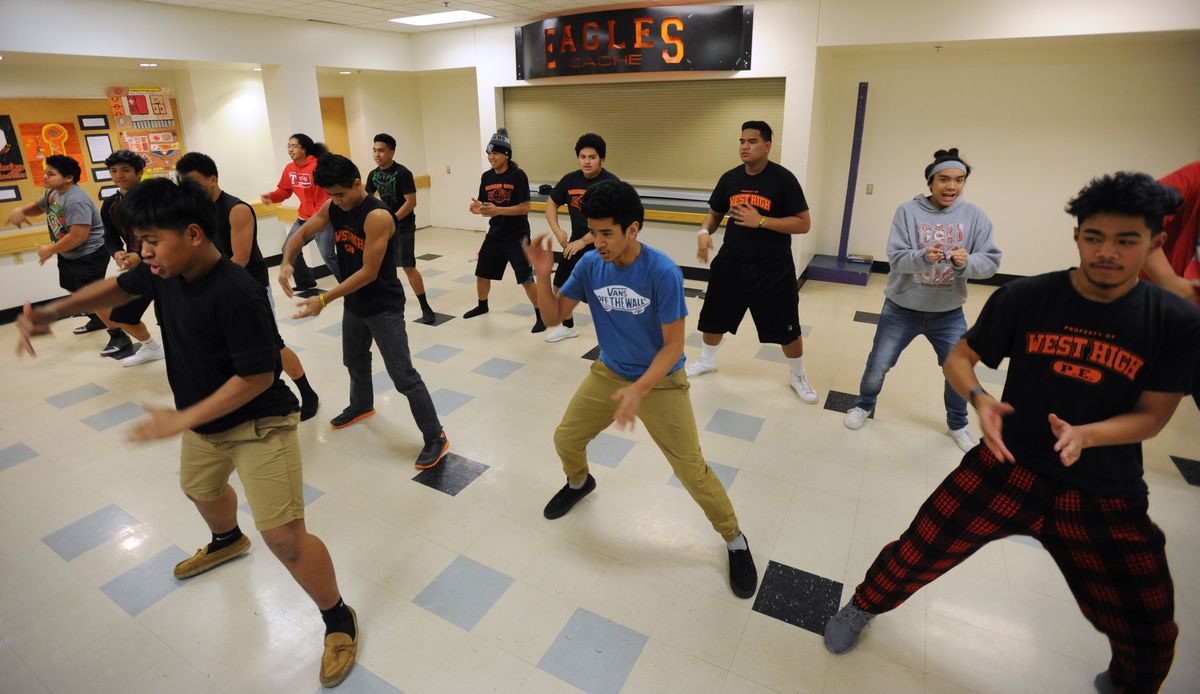 Faitete Pefua, front row, leads the West High “Poly Club” students in a dance in December. Students in the club meet twice a week after school for an opportunity to catch up on studies and friends and practice dancing. (Bill Roth / Alaska Dispatch News)

Faitete Pefua, front row, leads the West High “Poly Club” students in a dance in December. Students in the club meet twice a week after school for an opportunity to catch up on studies and friends and practice dancing. (Bill Roth / Alaska Dispatch News)

On a cold weekday after school at West High this month, Faitete Pefua gathered about 15 fellow teenage boys as a pop song started to play over speakers. Pefua, an energetic 17-year-old choreographer for the Anchorage school's Polynesian club, led the boys in a fast-paced dance that combined the traditional and modern, one they would perform for a larger audience in the coming days.

Pefua and all of the 40 or so students in the "Poly Club" at West High have to keep up their academic studies to stay in the club, which meets after school twice a week. The club was reinvigorated this year as one of the approaches by West High to have more students in school more often. Last year, West had the lowest attendance rate among Anchorage high schools, but by the beginning of December it was seeing improvement.

"Teachers have always said that if we can get our students in our four walls, we can educate them and they're going to be successful," said West High Principal Rick Stone, who led the charge to boost attendance. "We've found that when they get here, and they're here on time, and they're here in class, their grades improve, and then they want to come more."

To boost its attendance, West High, with its 2,000 students, is targeting specific student populations that have had some of the lowest attendance rates, Stone said — including Native Hawaiian and Pacific Islanders, Alaska Natives, African-Americans and students with disabilities.

"There's no silver bullet," Stone said, "but if we want to move that needle, we need to look at which groups are struggling."

Stone started off this year with the goal of improving attendance, he said. In a meeting with teachers, he showed the district's new data, including attendance rates. Stone said a person couldn't look at West High's data over recent years without realizing which student groups were not coming to class and where the school had to focus its efforts to improve.

"If you do the same thing over and over again and expect different results — that's the definition of insanity," Stone said.

Stone asked the staff to think of creative solutions to encourage attendance, and he began sending out a daily attendance report by email. Some teachers posted the reports in their classrooms and talked to their students about showing up, he said.

"Students started to become aware," he said. "They started encouraging each other."

Some solutions West High has adopted are rather simple, and Stone said they had long been done by individual teachers but without a schoolwide strategic push. Among them: staff in the hallways during class changes, greeting students, asking absent students why they didn't show up and telling them they were missed.

For some students, the school can help them get to class. In one case, Stone said, a teacher found out why a student did not always make it to first period — he had to take care of his younger siblings and help them off to school. The school changed the student's schedule so he could come in later and stay later, Stone said.

Jennifer Ehrheart, an assistant principal, said staff also talked to the front office secretary, Vicky Filemu-Tueipi, about helping with the Polynesian club. It had existed at the school for years, but had lost a strong structure and needed an adult mentor, she said.

Filemu-Tueipi agreed to take on the club, and she and the students came up with a motto and objectives including more focus on academic achievement. She requires club members to turn in their grades, signed by their teachers, every other month. She also requires that they spend the beginning of each after-school meeting working on homework before they dance or sing, and that they all maintain at least a 2.5 grade-point average.

"I want them to do the best they can," Filemu-Tueipi said on a recent afternoon. "I want better things for them."

Filemu-Tueipi also works in a unique spot in the school, sitting behind the desk where students must sign in if they come in late. She said last year she saw Polynesian students signing in late too often.

At the close of the club meeting, after the students had danced and prayed, she warned them: "Don't come in late. I don't want to see you in that line."

Pefua, the 17-year-old Poly Club choreographer, said the student club was the motivation for him to work harder in school. He moved to Alaska from Hawaii this year, and said at the start of the school year his GPA hovered around 2.0. He said he boosted it to a 2.8 GPA as the months went on so he could join and stay in the club.

As Pefua spoke of his improved GPA this month, other students patted his back and gave him high-fives. "That's my man," said one.

"I don't want to get bad grades and not see my boys," Pefua said.

James Tuiniua, the 16-year-old Poly Club president, said students in the club encourage one another to get their grades up and come to school.

The 16-year-old club secretary, Ailafo Alaelua, said he joined after spending the beginning of his high school career earning bad grades, causing his mom to cry when he brought home a report card. He said the club "inspired me to be a different person."

By the beginning of December, 61.7 percent of Native Hawaiian and Pacific Islander students at West High were attending school at least 90 percent of the time — up 20 percentage points from last school year, according to the district.

West High's counseling department has taken on the task of increasing attendance among Alaska Native students.

This year, school counselor April Christianson said, counselors are asking teachers to list other Alaska communities they have lived or worked in. Christianson said the goal is to create a database so when students come to West High from small, rural communities, they can be linked with a staff member who knows their area.

Christianson said that next semester, counselors will look at providing mentorship and tutoring opportunities for Alaska Native students, connecting them with younger students at the nearby middle school.

Christianson said that overall the school is taking a more active approach this year at looking at who is falling through the cracks and how staff can help them.

"We've all known in our hearts what the target populations are," she said. "These are the kids who we're losing, and that's not acceptable."

By the beginning of December, 54.1 percent of Alaska Native students were attending school 90 percent or more of the time, compared to 43.4 percent last school year, the district says.

Stone said additional approaches to increase attendance and grades will continue after winter break, including a new ukulele class that some students had requested as well as a shared document among teachers that includes reasons why students got failing grades. He said he hopes teachers can use the document to see if their students are struggling for similar reasons in other classes, and can use that information to connect students with additional resources if needed.

While there's more to come in 2017, Stone said that for now he's pleased with the progress the school has made, and proud of West High's staff and students and the work they have done to increase attendance.