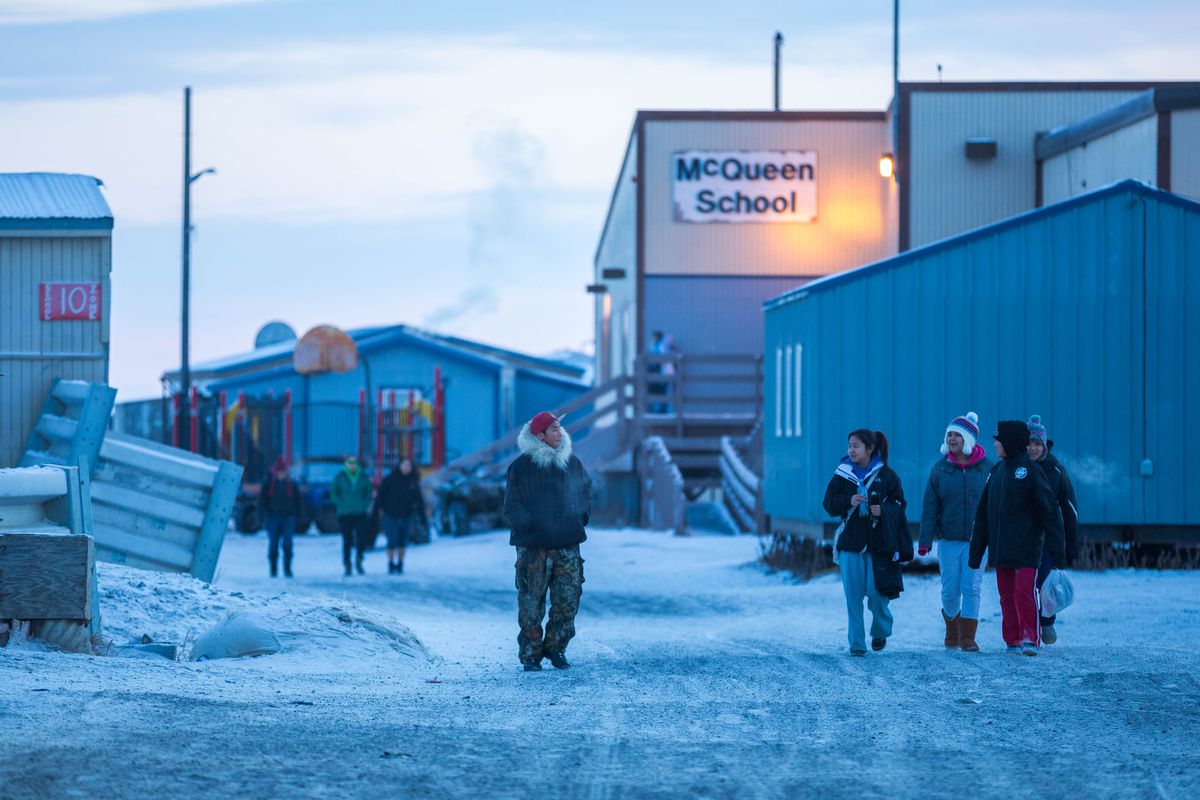 The Northwest Arctic Borough Assembly held an unprecedented meeting 2,000 miles away in Seattle last month, where it narrowly shot down a proposal by the borough mayor to award a no-bid project management contract for a new school near the climate-stressed village of Kivalina.

It was the last of three special meetings called in three different cities over one month's time to discuss the controversial contract proposal. The Northwest Arctic Borough School District vehemently opposed the idea and described it as misinformed, ill-timed and potentially in violation of state law requiring competitive bids.

Northwest Arctic Borough Mayor Clement Richards Sr. said the borough was attempting to "think outside the box" and move forward with the school project, estimated to cost $63 million and result in the construction of a new school building on higher ground. The site is about 7 miles from the village, which is threatened by coastal erosion and rising sea levels.

Richards said he called the special meeting in Seattle because the Assembly was already in the city for a retreat. But the district spent about $5,500 to send representatives from Alaska to Seattle to oppose the proposed contract.

The measure failed in a 5-6 vote after tense debate.

"I made the best choice, but it failed," Richards said of the proposal.

With the three special meetings now over, the thousands of dollars in travel expenses already spent and the resolution for a no-bid contract now dead, district and borough officials say they will move forward together to construct the new building, which will replace an overcrowded school for students in pre-kindergarten through 12th grade, as well as begin the village's move to a safer location.

"We're back at the table," said Annmarie O'Brien, school district superintendent. "We're back at looking how to move forward following the guidelines established by the state."

The Kivalina school project needs about $20 million more in funding — $9 million from the state and the rest expected from the borough, according to the Alaska Department of Education and Early Development.

The Alaska Legislature set aside $43.2 million in 2015 for the replacement school in Kivalina, about 80 air miles northwest of Kotzebue and home to about 400 people. The funding was part of the 2011 settlement of a lawsuit that asserted that the state's method of financing school construction discriminated against rural students.

Tim Mearig, state education department facilities manager, said Kivalina is the last of the five schools named in the settlement to receive full funding. The department has listed the Kivalina school as a top priority in its 2018 school construction list, which was sent to the governor.

Mearig said Wednesday that the department could not determine what the borough aimed to do in its series of proposed resolutions in November and December.

Two versions of the resolution would have awarded the contract to Kotzebue-based Remote Solutions LLC, owned by former Iditarod champion John Baker and his fiancee, fellow Iditarod musher Katherine Keith. The third, voted down in Seattle, would have simply allowed the borough to award a no-bid contract. None of the resolutions included a specific price for the sole-source contract.

Under state law, a competitive selection process is required if the construction management services are expected to exceed $50,000, and state funding is expected to be used.

Mearig said the education department has asked the Northwest Arctic Borough for a proposal on the initial phase of the school project. At most the first phase would cover the full design of the school, he said.

"There were a lot of pieces of project process that were being tossed around," he said. "We could not figure out exactly what their objectives were and that's why we asked them to write down what their plan was."

A school on a hill

Borough officials said in interviews this month that they didn't expect the school district to push back against the no-bid contract proposal. O'Brien, the school superintendent, said that the resolutions came as a surprise.

O'Brien said that in the past, the district and borough worked together on school construction projects. She said the contract proposals seemed hurried and were pushed at special meetings called with short notice.

"It's premature, by years," she said. "The rush is very confusing."

Richards, the borough mayor, said the borough was "regathering" on Wednesday and building the 7-mile road was its first priority. The road is considered both a path to the school site and an evacuation route for residents.

The cost of the road project could range from $40 million to $70 million, according to the state Department of Transportation and Public Facilities. Richards said borough officials planned to go to Juneau to lobby for road funding. He hopes the road will eventually lead to the new site of the village of Kivalina.

Richards said Remote Solutions had worked with the borough and he said he had pushed the resolutions "as a way to move forward." He declined to comment on why he supported the sole-source contract over putting the project out to bid.

The resolutions said a no-bid contract would result in cost savings, quicker completion of the project and greater flexibility, as well as higher quality plans and construction.

While neither O'Brien nor Richards could provide a timeline for the construction of the new school, they both now agree to work together and have the road built first.

According to a borough announcement in the legal section of The Arctic Sounder newspaper, the mayor's new chief of staff, Patrick Savok, was hired to work with the mayor, local communities and the school district "to develop consensus on projects and issues moving forward."

"Mayor Richards stated recent meetings over the Kivalina school construction project have caused division between School Board members, the Assembly and the Administration," the Dec. 29 announcement said. "He pledged to bring all parties together to work on an agreement that will move the project to construction."

Savok replaced Eugene Smith, who said in an interview that he was fired over the Kivalina school project. Richards declined to comment on why Smith was fired.

O'Brien said she looked forward to the future. She said the district agreed to support the road project, while working with the borough to come up with the match funding for the new school. The school it will replace enrolls about 150 students.

"In this region it's important that we work together," she said. "And we want those relations to continue to be strong, to help get those schools in place that our students need. So I'm very optimistic."